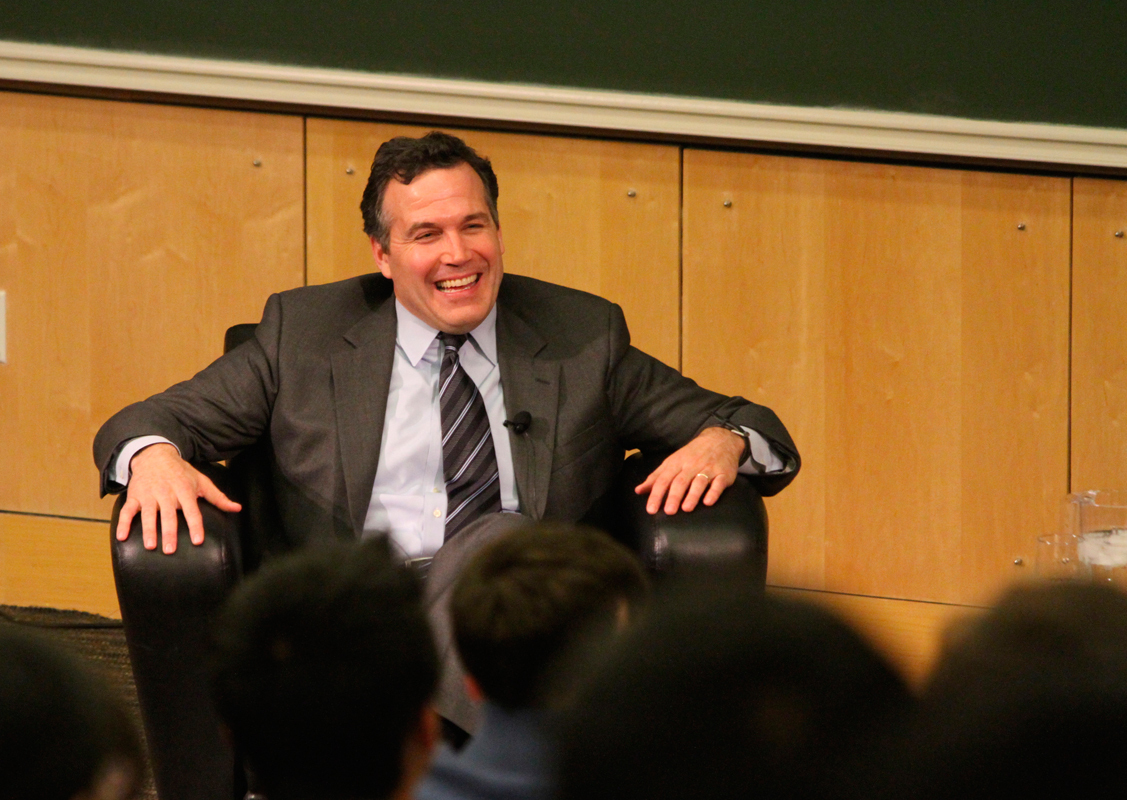 Former under secretary of the Treasury and current co-president of Bridgewater Associates David McCormick hosted a conversation with students. (credit: Jonathan Carreon/Contributing Editor)

“A Conversation with David McCormick,” a lecture hosted by the University Lecture Series, provided advice and career tips to a large crowd of students and faculty in Baker Hall’s Giant Eagle Auditorium last Monday.

McCormick is the former U.S. Treasury under secretary for international affairs in the Bush administration and current co-president of Bridgewater Associates, the largest hedge fund in the world.

Bridgewater Associates manages $130 billion, according to its website. McCormick fielded questions from Heinz College dean Ramayya Krishnan and, later in the talk, from the audience.

The event’s description gave an overview of McCormick’s career as “span[ning] both the public and private sectors, i.e. serving in the Army, working at McKinsey and as CEO of FreeMarkets, then the White House/Treasury, and now working at Bridgewater.”

McCormick first attended the U.S. Military Academy at West Point, and later earned a Ph.D. from the Woodrow Wilson School of Public and International Affairs at Princeton University.

McCormick is also a Carnegie Mellon trustee, and is a distinguished service professor of public policy and management at Carnegie Mellon’s Heinz College.

Krishnan led with a sweeping question, asking McCormick what he had learned from his varied experiences in different career fields.

“I feel like it’s this remarkable set of experiences you never could have planned,” McCormick said about his life so far.

A major focus of the dialogue between Krishnan and McCormick was McCormick’s role in the United States Treasury during the financial crisis near the end of the Bush administration.

McCormick said that at the time, “It felt like you were in the middle of a highway, and you were just dodging cars.”

McCormick also discussed his career choices, particularly how he ended up at Bridgewater Associates after being in the army and working as under secretary of the treasury.

“There’s this unique culture at Bridgewater where they’re incredibly blunt. I ultimately went because I thought I would learn more than any other place I went,” McCormick said.

He called Bridgewater Associates a “personal growth and evolution machine.”

Halfway through the event, McCormick began to take audience questions.

Sophomore international relations and politics and environmental policy double major and incoming student body vice president Peter Masters asked McCormick the question, “What’s the legacy that you’ve left so far, and what legacy do you plan to leave?”

“I’ve been trying to think of the next 20 years based on that question,” McCormick said. “I think the way you should think about that is ‘is it fulfilling, is it enriching, are you living an interesting life, and are you making a difference?’”

“I thought it was really informative and there was some great insight on how to deal with people in the workplace and at school as well,” said Elizabeth Ottens, a sophomore electrical and computer engineering major.
Senior materials science and engineering major Bianka Roy said that the lecture illuminated the “intricacies of being a leader in versatile fields, and just what it takes to succeed.”

McCormick finished his lecture by touching on the critical importance of personal growth and continued self-improvement throughout life.