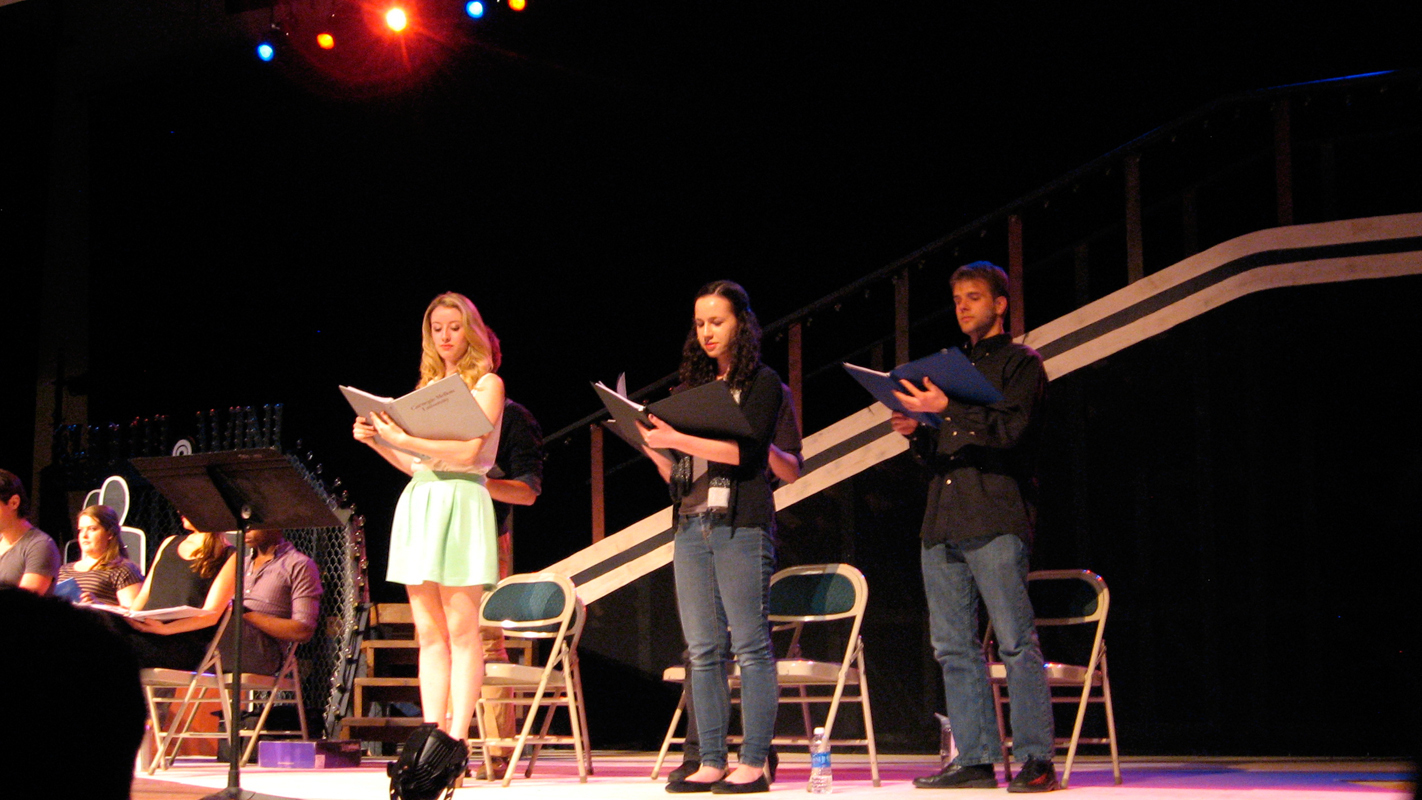 Among Spring Carnival’s attractions this year was a chance to catch an early glimpse at Sweet Jesus!, a new musical with music and lyrics by senior music composition major Eric Dietz, in the form of a concert reading. The script was written by Carnegie Mellon alumna Shannon Deep (BHA ’10, HNZ ’11) and Dietz’s score was orchestrated by Matt Aument (CFA ’10).

Naming a musical Sweet Jesus! might raise a few eyebrows, but the title is quickly put in context. The play is about a Broadway musical of the same name — following in the footsteps of Jesus Christ Superstar or Joseph and the Amazing Technicolor Dreamcoat — that an eccentric writer is trying to get investors interested in by way of a staged reading.

A staged reading has the actors read their lines aloud, with their scripts in front of them and without the choreography they would perform in an actual production. The stage directions are narrated, usually by the director or writer of the work. Because one of these readings forms the backdrop for most of the story’s action, the performance was essentially a staged reading about a staged reading — but with full musical accompaniment. This was either fitting for the nature of a the show or somewhat confusing, depending on whom you ask.

In fact, the entire cast gave performances that did not disappoint. Even members of the ensemble managed to display more than a little character, at least to the eyes of this untrained reviewer. When duplicitous lover Tyler (played by junior acting major Michael Campayno), who plays Jesus in the fictitious show, pulls out a ray gun and zaps the rest of the company, one of the ensemble members (played by sophomore vocal performance major Ethan Crystal) threw down his binder and stormed off stage, seemingly going off script on two levels.

However, the main plot, which has little to do with the premise of a terrible Jesus musical, is not quite as compelling the actor’s performances. The plot winds up as a bit of a flimsy excuse for a set of songs that are great for the most part. It’s pretty clear that the musical serves as a sort of love letter to the world of young people struggling to make it on Broadway; the last number, “New York,” couldn’t have made this any clearer if it required the whole cast to don “I Heart NY” shirts. There’s a clear longing for the trials and tribulations experienced by the protagonist John (portrayed by senior musical theatre major Trevor McQueen).

Despite making several references to Disney — and avoiding the endings associated with that name — this love letter can feel a bit like a form letter. The main plot lacks surprises and the characters all develop along expected lines. A lucky (literal) break gives the young country boy a shot at success; his lover turns out to be a cheating jerk; the roommate and his friend from home have the country boy’s back; and he manages to reconcile with his mother, who is unable to accept his homosexuality.

Honestly, the most surprising thing is the how little attention the women get. Gillian Hassert (CFA ’12) sings to McQueen while portraying his mother, but the song is still male-centric: It’s about her devotion to her son. The only other exclusively female song is “When You’re a Hag,” which bemoans the inability of John’s high school friend Annie (played by junior voice major Chloe Holgate) to find a straight man interested in dating her. Beyond the social issues involved in these choices, there’s the structural problem of the female characters having nothing interesting to do but offer moral support for the protagonist despite having a diverse set of personalities.

As a final note, the music was well executed and fun.