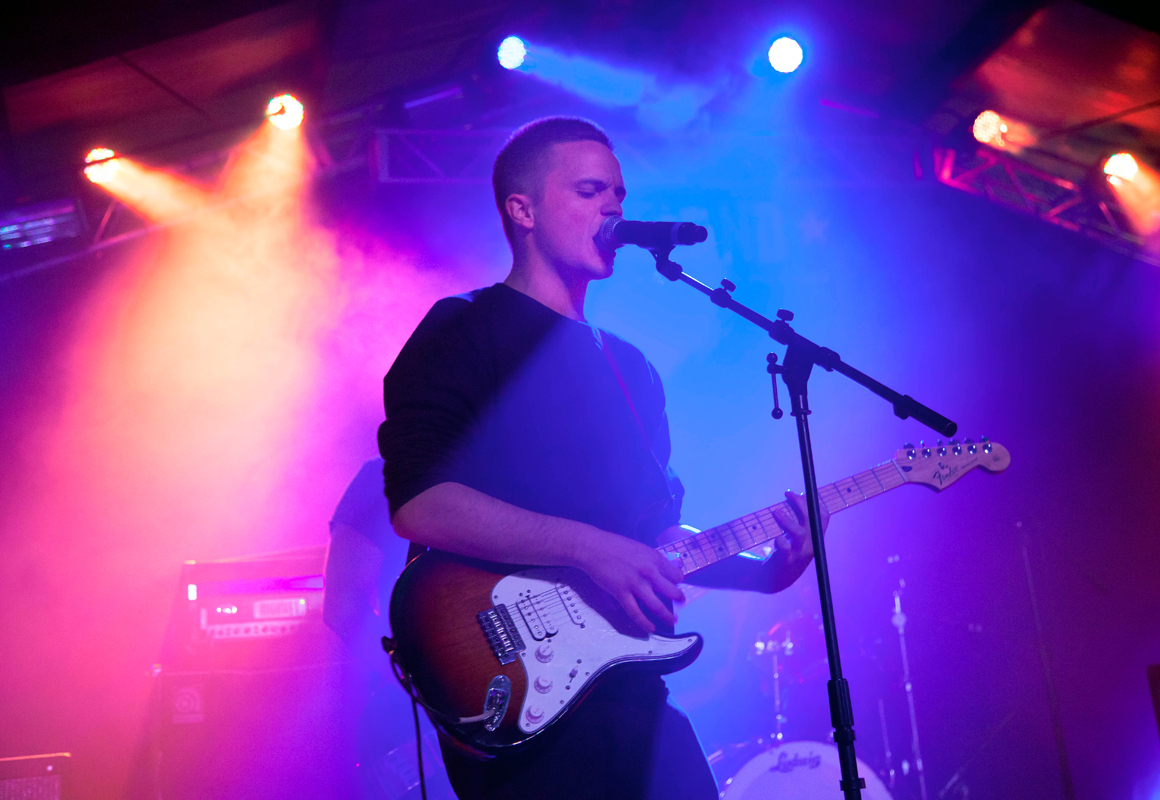 Among the musicians featured at the festival was Tampa-based band Merchandise, which performed at the Viceland showcase hosted by Vice magazine. (credit: Courtesy of WRCT and Peter Leeman | Junior Photographer)

One hundred venues, 2,200 performers, 20,000 attendees: The scope of South by Southwest (SXSW) is massive, drawing multitudes of hip twentysomething musicians, filmmakers, and partygoers to Austin, Texas every spring. Since its advent in 1987, it has continued to grow in size; music is typically one of the more popular aspects of the festival, with shows running concurrently for six of the 21 days of the festival.

Though the music portion spans a variety of genres, I was drawn primarily to the electronic showcases. The festival’s diversity makes it an excellent forum for discovering new artists. These were two of the most notable shows that I saw, and I will certainly keep track of these artists.

Andy Stott has always been a stylistically agile artist. His performance at Resident Advisor’s official showcase on March 13 was a dark and dubby representation of his techno-inflected approach, displaying much of his more recent remixes and Luxury Problems releases. Lo-fi production and dirge-like rhythms chugged along somewhere in the 100 BPM region, incorporating odd elements of existential dread that recalled old Joy Division records.

For those unfamiliar with Stott’s work, it is haunting and atmospheric. His 2012 album Luxury Problems is laced with vocals from his old piano teacher, Alison Skidmore. In equal parts mournful and seductive — sometimes even operatic — she gives his music a sexy and haunting feel; her lyrics and Stott’s applications of reverb and delay made his performance particularly wistful. While his melodic layering and deep basslines may not suit everyone, those interested in techno (and experimental electronic music in particular) would be taken in by his live interpretations of his own work.

To fully appreciate Stott, it’s crucial to have subwoofers or a good pair of headphones cranked up to 11. The venue, Elysium, was perfectly suited to the artist’s visceral bass lines, and I was only able to gather a better understanding of his music by being immersed in that environment. That being said, regular listeners and newcomers to the experimental techno scene should still give him a shot.

Flanked by sheer monitors, the L.A.-based electronic artist Flying Lotus (also known as Stephen Ellison) made his presence just one part of the spectacle by projecting trippy images onto overlapping screens. The next 90 minutes were filled with transitions and layer blending that would enthrall any EDM fan, and most individuals in the audience will likely remember his selection of curative audio and choice samples (including Beastie Boys’ “Intergalactic” and his own “Astral Plane”).

The driving force of psychedelic emotion that Ellison evoked in his performance was largely due to his sample choice and manipulation. Like Amon Tobin, FlyLo — as his fans call him — is capable of recontextualizing samples in creative and distinctive ways, often producing entirely new instrumentals by rearranging existing musical parts. “All the Secrets” from Until the Quiet Comes, for example, does an excellent job of subtly altering piano melodies to bring about more dream-like, abstract themes. These themes are echoed in Thundercat’s vocals in “DMT Song” (with an obvious nod to the psychedelic drug of the same name). Though numerous overlapping patterns saturate his songs, he has a penchant for using a number of samples and vocals without cluttering his arrangements.

Graceful, humble, and enthused, FlyLo finished his set in a way that many did not expect: calmly. There was no final drop, no loud explosions of confetti or laser lights, and no gratuitous into-the-mic shouting matches. If anyone understands the flow and energy of a show, it is FlyLo: He knew that the audience had just danced itself into exhaustion for two hours. Lulling listeners back into a relaxed state (as he is known for with his Adult Swim-produced beats and bumps), Ellison left the stage to the chants of “One more song!” and faded into the background, letting the audience reflect back on what they had just experienced.

SXSW was both an opportunity to harvest a deeper understanding of familiar music and a unique chance to experience genres beyond one’s comfort zone. I recommend following SXSW blogs to discover more about the showcased musicians and attending the festival next year, if you’re able.