Campus weighs in on stress culture 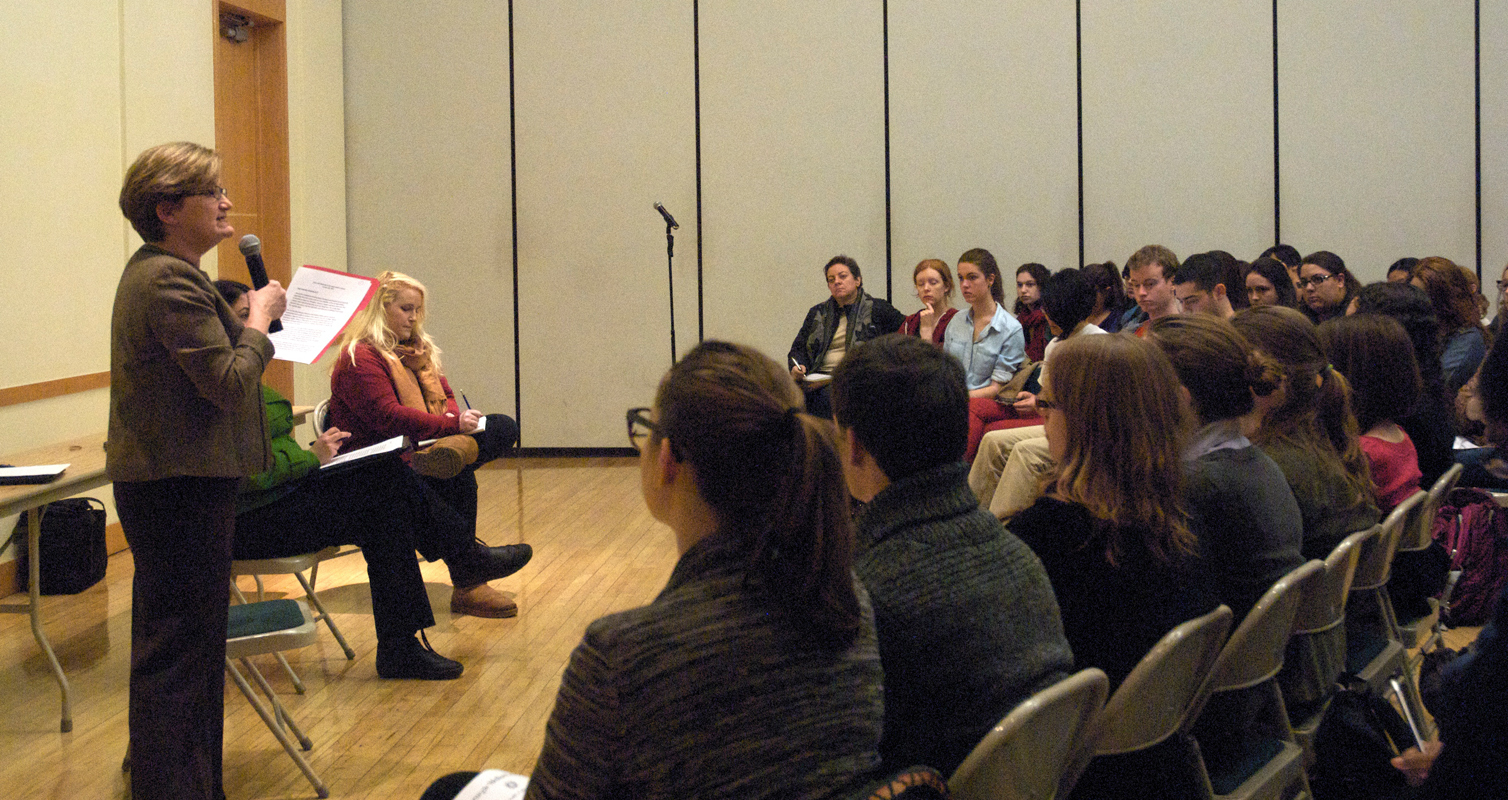 Vice Provost for Education Amy Burkert discussed how the university has been trying to curb student stress in the past year. (credit: Kate Groschner/Photo Editor) 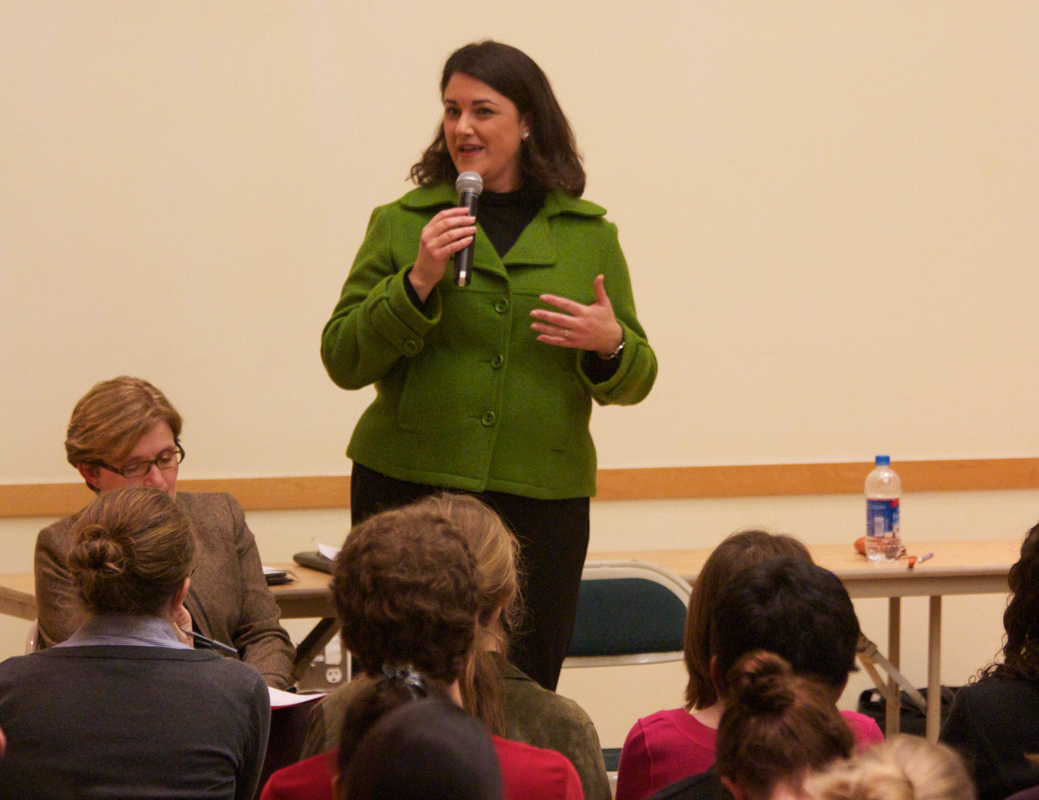 The meeting, held in Rangos 1 in the University Center, was highly attended — the auditorium was filled to capacity.

At the door, every participant was handed a sheet of paper that reminded them to respect their peers’ opinions and right to speak, and provided discussion prompts, asking questions such as, “We are in the midst of a presidential transition, which allows for a unique opportunity to reflect upon who we are and who we wish to become as a university community. How would you describe our culture to the incoming president?”

The Town Hall came partly as a result of the death of Henry Armero on Dec. 7 and an editorial published five days later by The Tartan, “The happy mask: Carnegie Mellon must address stress culture,” written by Katie Chironis, a senior creative writing and human-computer interaction double major who graduated in December.

In her editorial, Chironis wrote about the bravado that Carnegie Mellon students often use to disguise their personal struggles and heavy workloads: “The terrifying thing is that emotional and mental suffering doesn’t show on the skin. It’s often the happiest students, the ones who chuckle at their workload, who feel that pain most keenly. And it’s those students who need help. Clearly not all of them are getting it or feel comfortable seeking it.”

Referring to this “happy mask” that students put on to cope with their heavy workloads, Chironis wrote, “A more serious question, then, is why is the university ignoring the elephant in the room?” Chironis said that some services provided by the university such as Counseling and Pyschological Services (CAPS) can be effective, but are often crowded and understaffed.

In an email sent out on Jan. 21 to notify students of the upcoming Town Hall, Casalegno wrote, “Many of you have already read the editorial published by The Tartan, which has sparked an important campus dialogue about our culture and its impact on our well-being. In the days and weeks following the article’s publication, I have heard from many students, faculty, and staff about their reflections on CMU’s culture and their aspirations for creating a greater community commitment to wellness.”

At the Town Hall, Casalegno said that “it is clear there is a passion sparked on this topic, and we really want tonight’s event to be an opportunity to inform one another and inform us as we think about where CMU, where Carnegie Mellon, will head in the future as we think about our community well-being.” She said that last spring a survey called “CMU Says” was taken, co-sponsored by her and Burkert, in which one-third of the questions were about personal well-being.

Over half of graduate and undergraduate students participated, and the results — which have already been presented to the academic deans, president, and provost — will be presented to the Student Senate and Graduate Students’ Association later in the semester. Discussion was active throughout the Town Hall; at one point there were about 30 students waiting to speak.

Students had many suggestions, including the creation of a three-unit Caring@Carnegie Mellon course, structured similarly to the required mini Computing@Carnegie Mellon, and more ways for students to relieve stress and blow off steam.

Another idea was to reconsider the way that class units are calculated: “I think maybe we should have a way to re-evaluate the idea of units.... I know that the way the unit system is supposed to work is that you’re supposed to work nine hours for the week, but I know that I spend a little bit more than nine hours per week on that class.... If maybe there’s a better way to evaluate our courses, evaluate the way we view success, and then also how we better allocate our time, I think students will be in a much better place,” said Joe Frick, a senior economics major.

Will Weiner, student body president and fifth-year senior decision science and economic and statistics double major, was also in attendance.

“I think it was almost like a very nice cathartic moment for the campus community to be able to have people get these stories off their chests, and in some ways among the silent I’m sure there are more stories like that and it’s comforting to see there’s this other community,” Weiner said.

Vivek Nair, a sophomore electrical and computer engineering major, said after attending the Town Hall meeting, “Yes, I do feel there definitely is something the university needs to do to address this issue. I guess there are some resources out there, but they may not always be the most approachable or most visible.”

According to Nair, “CMU consists of a lot of bright people.... So they feel they have this inertia of success that they feel they need to keep going, and sometimes they don’t all fully appreciate this place as different. It’s a lot more difficult than things they may have experienced.”

“A lot of people were saying that [their workload] just kind of all a sudden hit them, that they couldn’t do everything,” said Luke Sampson, a first-year biology major.

“I think it’s more on the students than it is on the school. Because the school is here to educate us and give us this challenge, and then it’s on us as students to accept the challenge and take it in stride.”

At the Town Hall, Frick also spoke about the heavy burden that Carnegie Mellon students put on themselves. “Maybe people need to reevaluate how they view their extracurricular activities,” he said. “I don’t know of a single Carnegie Mellon student who does nothing besides academics, goes to office hours, does everything else, and struggles with school.... We’re doing a lot of different things, but we view those not as leisure time, but additional tasks.”

Sophia Kim, a first-year business administration major, echoed Sampson’s sentiments.
“There is a lot of stress culture, but I also feel like in a sense it’s our part, also, to budget our time wisely, because we can easily get distracted by social networking sites and stuff,” she said.

William Elmore, a junior civil engineering and engineering and public policy double major, emphasized the importance of communication between the administration and the student body and the role that the Town Hall played in that dialogue. “I think communication with the student body is necessary, reassessing the way CAPS is designed and utilized is also probably necessary and there are infinite ways of approaching this problem,” he said.