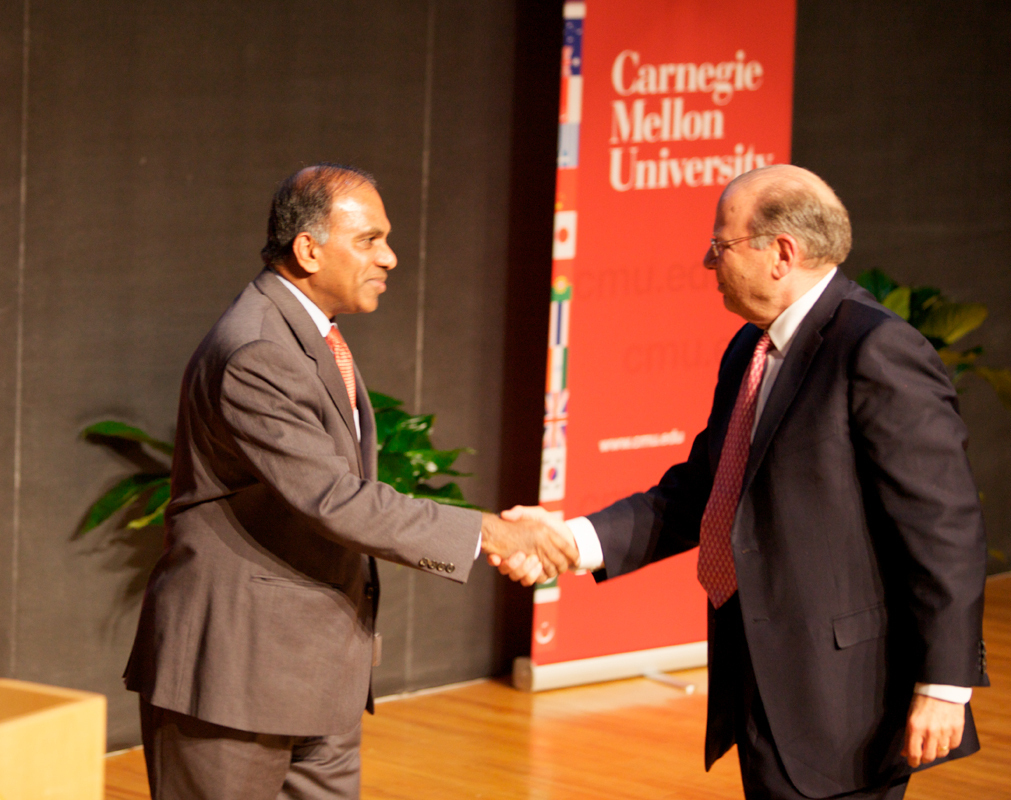 Carnegie Mellon welcomed President-Elect Subra Suresh and his family with pomp and circumstance on Thursday night, with a series of speeches in McConomy Auditorium and a reception in Rangos Hall.

The speakers, introduced by a bagpiper, included outgoing university President Jared Cohon, chairman of the Board of Trustees Ray Lane, and Will Weiner, senior economics and statistics and decision science double major and student body president. Suresh spoke last.

The bulk of Cohon’s and Lane’s speeches addressed the process by which the search committee found and selected Suresh as the university’s next president.

In addition to thanking the presidential search committee, Lane told the story of the Board of Trustees’ first discussion two years ago about who they wanted for the university’s next president.

“If anyone had told me back then that the process would go as well as it went for the last two years, I just would not have believed them,” Lane said. “I’ve been around the track too many times to know that things go as planned. But this went pretty much as planned, and I give a lot of credit, if not all the credit, to the search committee.”

Suresh, who is the current director of the National Science Foundation and former dean of the school of engineering at the Massachusetts Institute of Technology, said that his first action upon taking office will be to go on a “listening tour” of the university.

“I’m looking forward to holding many open forums, listening to students, faculty, and staff, to get [the] very different perspectives that exist in a university like this,” Suresh said.

The students, faculty, and staff who attended the event seemed to come away with a sense of optimism.

“[I’m excited about] the fact that he is so positive and forward thinking, and is excited to be here and be part of our community and get to know us,” said lighting design professor Cindy Limauro.

“I think his past record has proven that he is a good leader and will be somebody that I think will command respect from the faculty, the students, and the staff, and will go on this journey with us.”

Weiner shared Limauro’s enthusiasm for Suresh, with whom he got to speak personally during the preparations for the event.

“Clearly on paper he’s amazing, but he’s [also] a really great guy,” Weiner said. “Just chatting with him, he’s really approachable, really down to earth, and has a really good idea of how he can work with students and how he can make this place better.”

Student Body Vice President of Finance Jon Mark, who met with Suresh and the other presidential candidates when they visited the university prior to the Board of Trustees’ decision, agreed.

Both Weiner and Mark stressed the importance of a good relationship between the president and students.

“I urge next year’s students to work with him, just help him understand how the student process works and really make sure to establish that relationship early on,” Weiner said.

Mark hoped that Suresh would make sure to remember students.

“One of the biggest things that I would encourage him to do is to really make sure that as a president, he’s going to prioritize the student experience,” Mark said.

“I think that right now he’s going to push this university in a lot of great ways, but I think that it can’t be forgotten that there are people here for four years, that it means a lot to them that they have a president that … [will] really make sure that it’s the best experience it can be.”

Suresh spoke of his upcoming tenure as president with excitement.

“As I get to know this community better, I’m confident that we have a common mission and a common goal. We all very firmly believe that Carnegie Mellon is a great institution. But we also firmly believe that Carnegie Mellon is an institution that has all the ingredients and potential for much greater greatness. I very much look forward to working with you to achieve that,” he said.