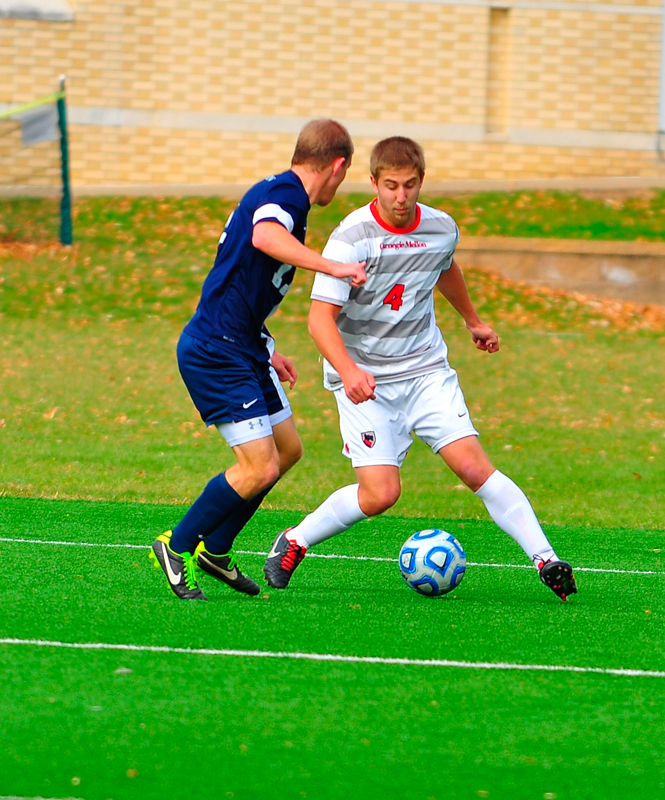 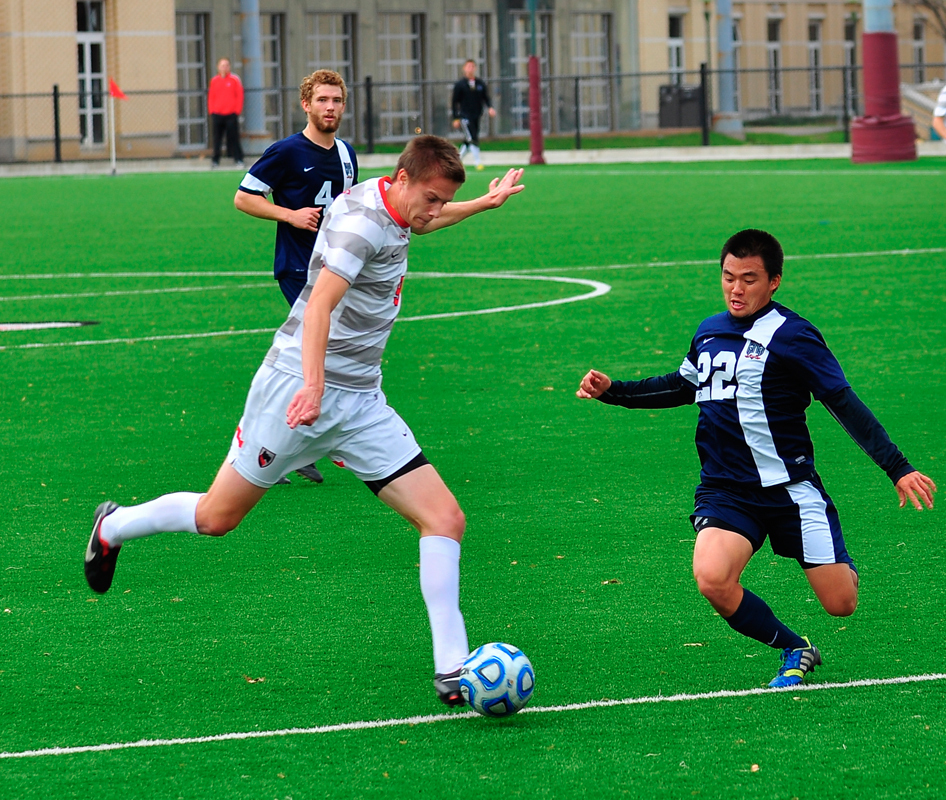 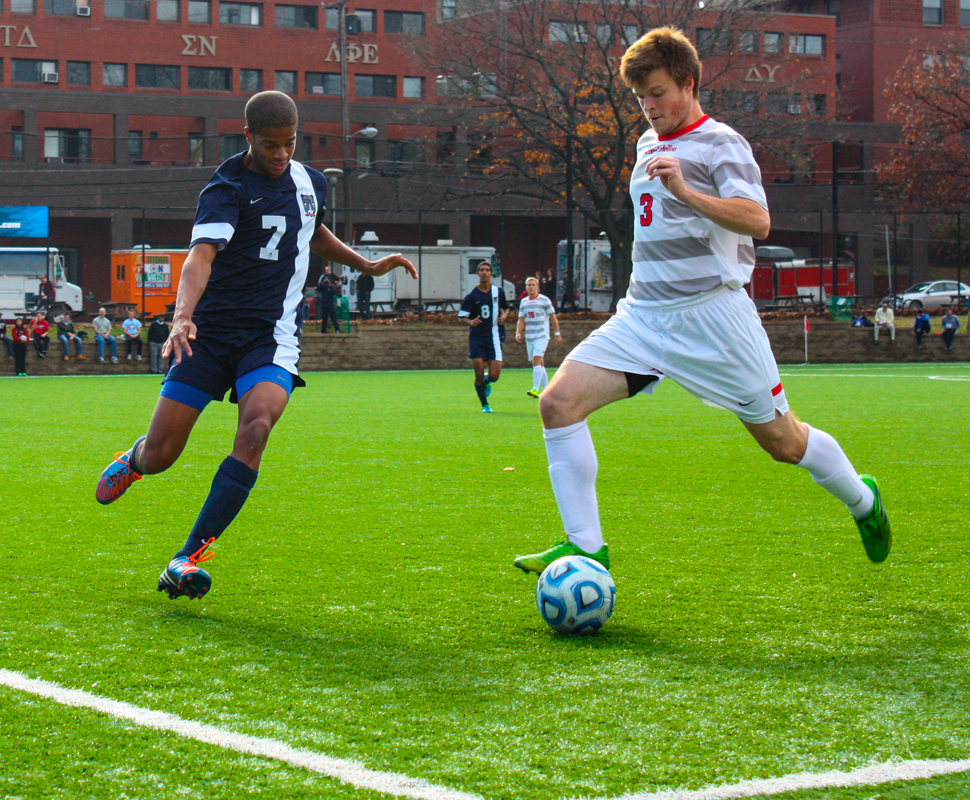 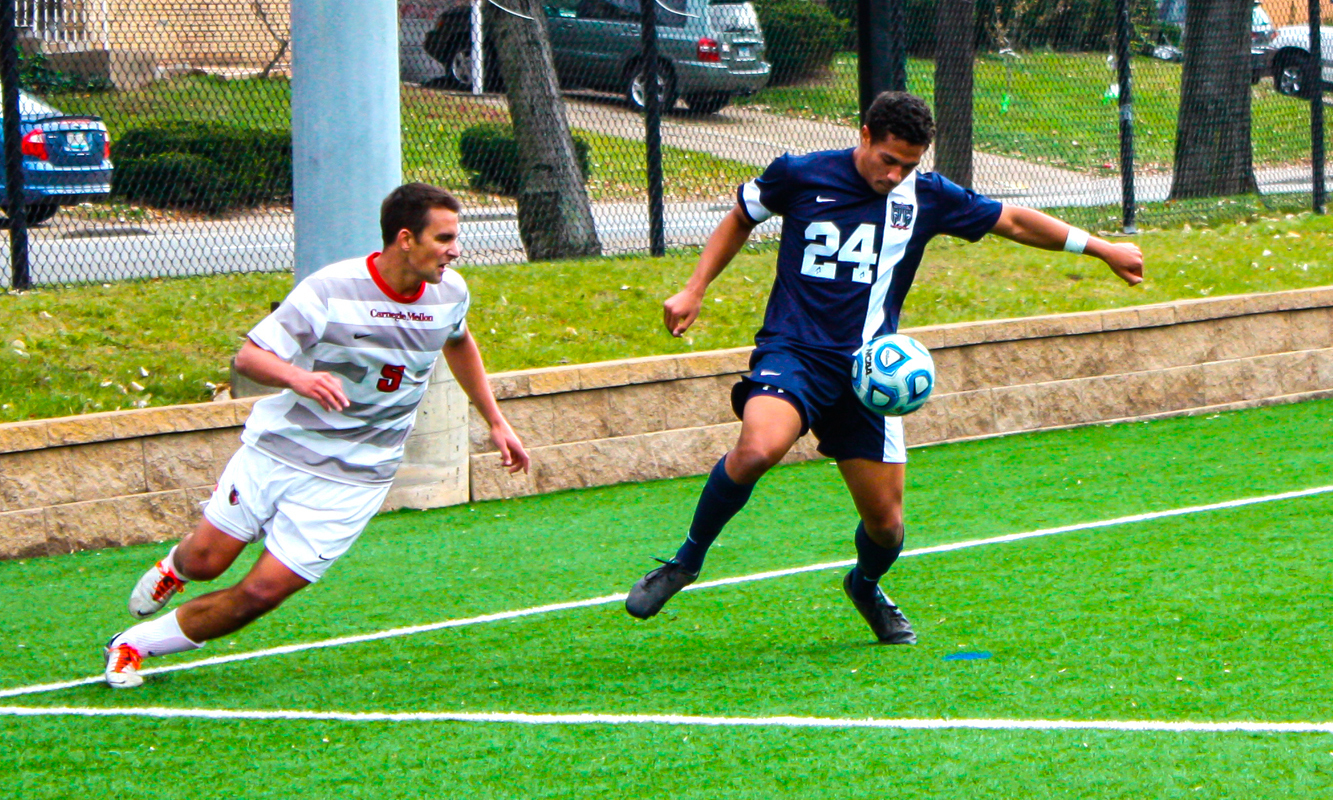 The No. 12 men’s soccer team’s NCAA Championship aspirations ended this Sunday in a 1–0 loss to No. 22 Montclair State University. On that rainy Pittsburgh afternoon, the Tartans couldn’t crack the tight Montclair defense.

The Tartans had many quality chances on goal, starting in the 27th minute. Senior forward Max Tassano slipped behind the defense and took a hard low shot from outside the penalty box, but Montclair’s goalie Kevin Lynch made a great diving save to his right.

Lynch made four more saves and was a big presence in net.

Montclair State scored the only goal of the game after a poor clearance in the 30th minute. A deep throw-in bounced into the Carnegie Mellon penalty box, but no one was able to clear it and Montclair’s Lucas Terci fired an uncontested shot to the right corner of the net.

Montclair State took six shots in the game, and the Tartans took 12.

In the 34th minute, the Tartans received a break when Montclair’s Kazari Trought was given a straight red card after elbowing sophomore midfielder Jordan Friedlander in the head of a disputed throw-in.

With the man advantage, the Tartans created several threatening scoring chances. But a strong Montclair midfield made it difficult for the Tartans to win loose balls and control possession.

In the second half, Montclair was content to sit back and defend. The Tartans maintained possession in the opposing third, but the margin for error was extremely small given how tight the Montclair defense was.

“They just made it tough for us and defended with everybody,” head coach Arron Lujan said. “We kept trying and trying — we had a few really good chances — and we just couldn’t put it away.”

Senior defender Ben Bryant was determined to carry his team into the next round. In the 70th minute, he singlehandedly stopped a Montclair counterattack and dribbled into the defense. He beat his defender and fired a shot that went inches above the crossbar.

Bryant is one of six senior starters who played their final game. The Tartans will lose their two forwards Tassano and Chris Wysocki, who combined for 15 goals this season, as well as midfielders Mike Ferraco and Matt Sarett.

Senior goalkeeper Christopher Madden made several crucial saves throughout the season and finished with six shutouts. “We have a lot of great seniors, and we’re going to miss them a lot,” Lujan said.

After the game, several senior players had tears in their eyes and shared long embraces with teammates and family members.

“To go out in a cruel game like today was tough, but they should be proud of what they’ve done,” Lujan said.

Over their four years, the senior class led the team to two NCAA Tournaments and a University Athletic Association (UAA) title last year.

Notable players who are also graduating include forward Jerome Reano, a speedy attacker who consistently gave the team a spark off the bench, and midfielder Cole Christensen.

But with a 12–3–3 record and a second-place finish in the UAA Conference, the season was by no means a disappointment.

“The team was great this year. It’s not easy to repeat what we did last year because we’re not surprising anyone,” Lujan said. “For us to come out and get to the same round in the NCAA Tournament that we did last year, I think, is a great accomplishment.”