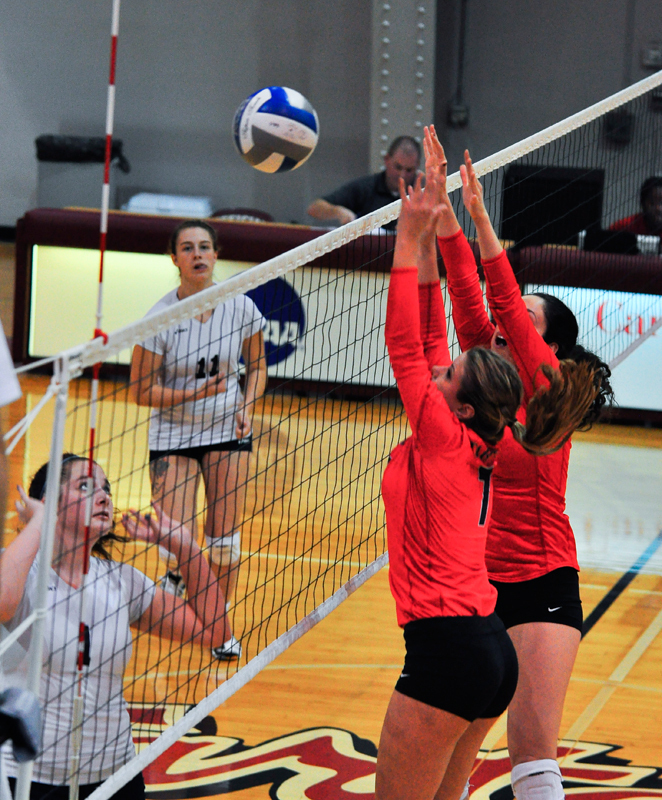 The women’s volleyball team finished the regular season with a 25–9 record. At third place in the UAA Conference, the team has a good chance of earning an at-large bid into the NCAA tournament. (credit: Staff Photographer)

The women’s volleyball team had had enough.

Over the previous three seasons, the Tartans were 0–5 against Washington University in St. Louis, their opponent in Saturday’s third-place game of the University Athletic Association (UAA) Championships.

“Wash. U. is our biggest rival and always has been,” said senior and team co-captain Ali Nichols. “Saturday morning, all the seniors got together and realized how awesome it would be to finally beat Wash. U.”

Leading the game 2–1 and up 24–23 in the fourth set, Washington University appeared on the verge of another win over the Tartans.

Washington had the opportunity to win the game and instead committed a service error. A kill by senior outside hitter Senna Parsa and another Washington error allowed the Tartans to take the pivotal fourth set.

“When it came down to it, our consistency and — more than anything — our drive to win were the reasons we were able to take the fourth set,” Nichols said.

The Tartans carried their momentum into the fifth set, which they won 15–9 to take the game 3–2 and secured a third-place in the UAA Championships.

The victory was spearheaded by junior and co-captain Ali Celentano’s 18 kills and Parsa’s 14 kills.

Washington University wasn’t the only rival the Tartans had to beat.

The Tartans opened the tournament against New York University, who had earlier defeated Carnegie Mellon in straight sets in the second UAA round robin.

Coming into the tournament, the Tartans were also tied with New York University for fourth place in the UAA Conference.

“Going into the season, we knew we had to beat NYU for a shot at going to the NCAA tournament,” Nichols said. “That was looming over our heads the past month during practice, and we have worked a lot harder to specifically beat NYU.”

On Friday against NYU, the Tartans dropped the first set 19–25 and came back to win the second set 25–20 and a tough third set 31–29. The Tartans won the fourth set at a comfortable margin of 25–18 to advance to the next round.

A 3–0 loss against the University of Chicago set them up to play No. 8 Wash. U. for third place.

The Tartans finished the regular season with a 25–9 record, an impressive improvement over their 12–22 record from three seasons ago.

More than that, the Tartans have a good chance of earning an at-large bid into the NCAA tournament. Their last NCAA bid was in 2008.

With a strong UAA Conference record, the Tartans believe they have played well enough to deserve a bid. “I really think we have. Hopefully, that win over Wash. U. guarantees us a spot,” Nichols said.

The senior class, which include Nichols, Parsa, outside hitter Mary Stadelman, and outside hitter Rachel Miller, has played a major role in rebuilding Carnegie Mellon’s volleyball program.

Regardless of whether the volleyball team will play in the NCAA tournament, the future is bright. First-year middle blockers Jackie Gibbons and Casey Salandra and first-year opposite hitter and setter Emily Newton have all emerged as consistent starters.

“The freshmen that we have this year are really strong, and I really see the program taking off from here,” Nichols said.