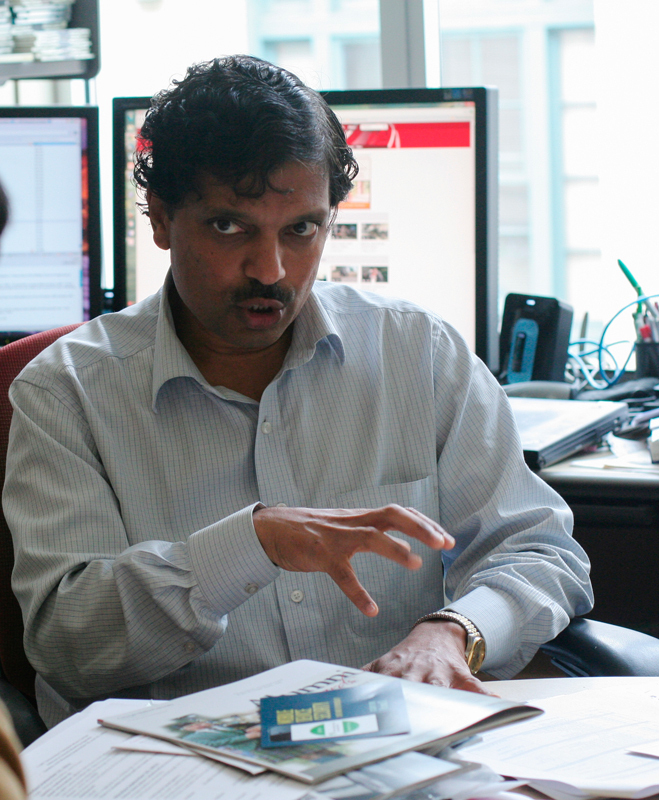 Ragunathan Rajkumar, the director of Carnegie Mellon’s Technologies for Safe and Efficient Transportation, discusses his work on vehicle sensors that can detect other cars, pedestrians, and even red lights. (credit: Michelle Wan/Junior Photographer)

Car-related accidents are one of the leading causes of death in the United States. Over 30,000 people died from car-related accidents in 2011, and thousands more are involved in accidents that cause injury, according to the National Highway Traffic Safety Administration.

Researchers at Carnegie Mellon University, in conjunction with the University of Pennsylvania and the Department of Transportation (DOT), are taking strides to reduce these staggering numbers. Last week, DOT renewed the grant for Carnegie Mellon’s Technologies for Safe and Efficient Transportation (T-SET) program for the next two years, awarding close to $5.7 million.
The DOT’s University Transportation Centers program picks five universities around the nation to lead and set the standards in strategic areas including safety, economic, environmental, and maintenance concerns with transportation.

Two years ago, T-SET partnered with the University of Pennsylvania and was recognized as a University Transportation Center with an emphasis on safety; it has been awarded $2.85 million in grant money each year since.

Ragunathan Rajkumar, the director of T-SET, said, “With Carnegie Mellon on the west and the University of Pennsylvania on the east, we think we can improve safety in the state very well. However, this being a national center, we solve national issues. We think we can have a big impact on the regional aspect, but we have an emphasis on the national scale of our projects.”
Rajkumar said that over the last three years, Carnegie Mellon has implemented numerous technologies in the local Pittsburgh area in order to increase efficiency and safety in the region.

The website parkpgh.org is one such example. On the website, users can see the capacity of all of the parking garages in Pittsburgh in order to cut out the arduous process of roaming around the city looking for parking. A similar program called Tiramisu informs transit-users about the capacity of buses around the city so that they are not left waiting for a bus that ends up being full.

In addition, advanced traffic lights are being installed in East Liberty; the lights monitor traffic coming from all directions and make decisions about what the lights’ colors should be every two seconds.

With this technology, drivers are no longer stopped by red lights at empty intersections and are more likely to hit consecutive green lights instead of constantly stopping and going.
With this new round of funding, T-SET is looking to invest in new types of accident prevention methods.

For instance, T-SET is expanding research that will allow sensors to gauge the conditions on the road and determine if an accident is likely to occur. While this technology was previously directed towards vehicle infrastructure, new initiatives are being made to implement it for bicycles and pedestrians.

“We are looking to add technologies into bicycles and pedestrians because many of the accidents occur between a car and a pedestrian or biker,” Rajkumar said. “The technology would go into the smartphones of the pedestrians and onto little devices to be placed on the bicycles.” Additional initiatives in these forms of intelligent transportation systems include vehicle-to-infrastructure communication.

Rajkumar said that T-SET is working on technologies that would allow traffic lights to directly inform cars of the status of the light and respond to different situations. For instance, if the driver is not paying attention and is approaching a red light, the technology will slow the car down to a stop and prevent a potential accident from occurring.

Additionally, vehicle-to-vehicle communications offer great leaps in safety. One branch of research is developing communication and sensing devices that can detect the relative distance between cars. If cars are positioned too closely or are on a projectile pathway to collide, the device will actuate a response, such as a stop or redirection, in order to prevent the accident.
Each year, thousands of accidents occur when drivers run red lights or bump into each other.

“More than 90 percent of automotive accidents are caused by human error,” Rajkumar said.

On roads fitted with intelligent transportation systems, human error could be largely mitigated. Rajkumar envisions that, within the next 10 years, the technologies developed at Carnegie Mellon will find their way into many roads, traffic lights, and cellphones around the country.