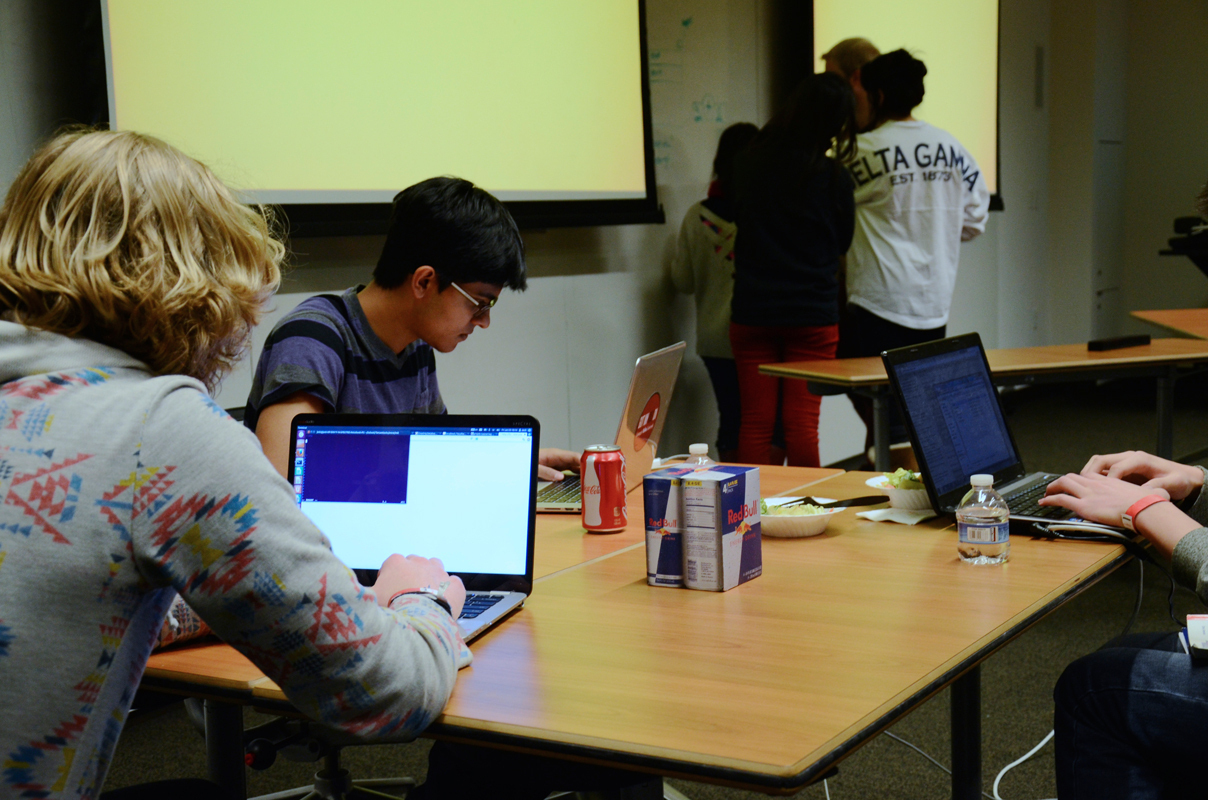 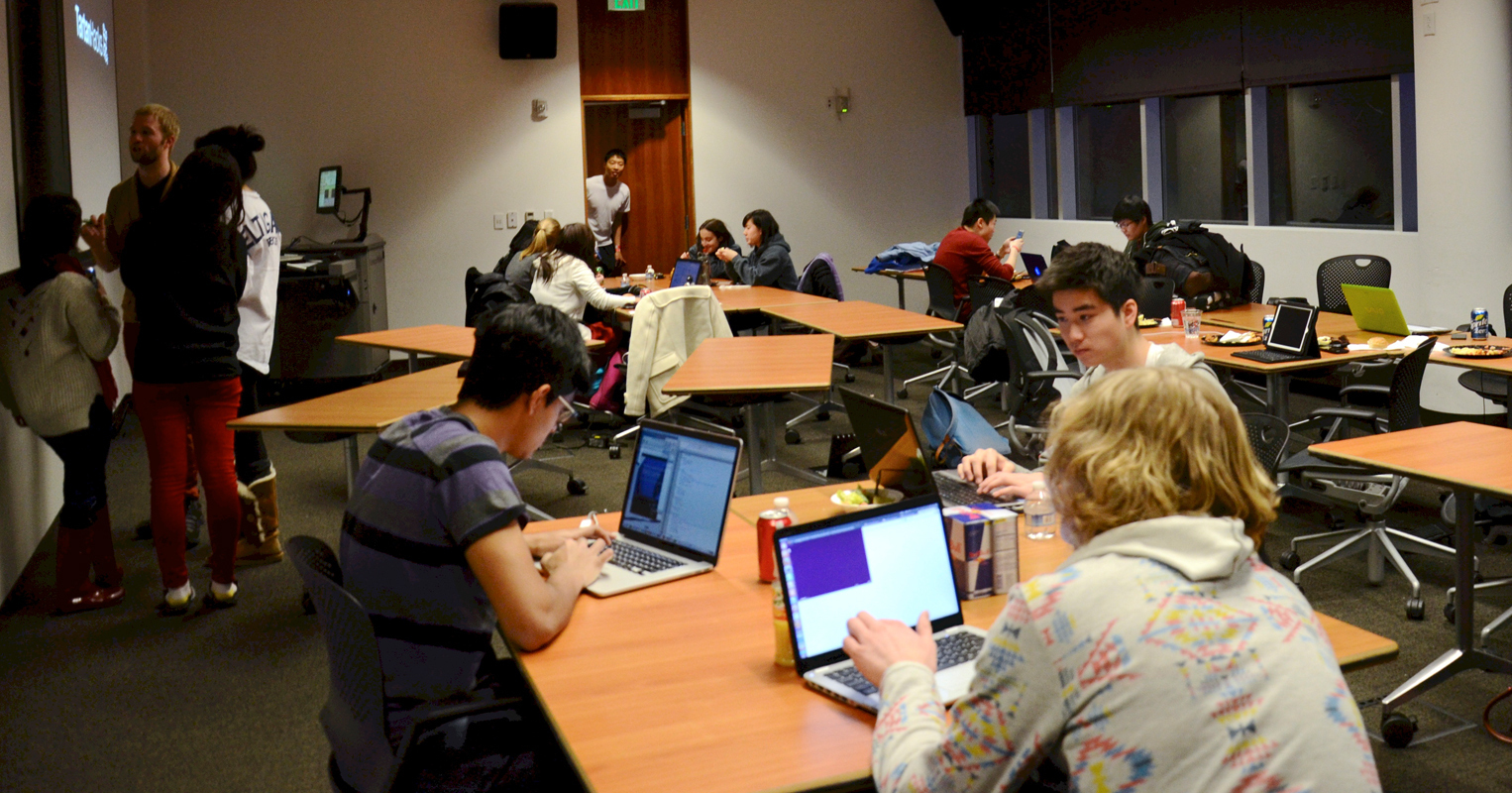 As students and faculty finished the second week of the spring semester, nearly 200 Carnegie Mellon students gathered their coffee, energy drinks, and inventive spirits as they prepared for TartanHacks.

TartanHacks is an annual, student-run hackathon hosted by the student organization ScottyLabs and its partners, the Carnegie Mellon School of Computer Science Undergraduate Program, Project Olympus, and Women@SCS. In addition, the event has attracted sponsorship and support from a number of companies, including Dropbox, Google, Yahoo, Microsoft, Facebook, eBay, Capital One, and Andreessen Horowitz. TartanHacks took place in designated “hacking zones” in the Gates Hillman Complex from 6 p.m. last Friday to 6 p.m. Saturday.

This year’s winners included “GoogleMinus,” an app that allows users to search Blackboard as they would search terms on Google, which won Capital One’s sponsor prize for the most technically challenging hack. “TaskMob,” a real-time collaborative task management app for mobile devices, won the first prize of $2,000.

This year, keeping in line with the popular computer science notion of zero-based indexing (numbering starting from zero), there was also a zeroth prize, which was intended for the best team. “Chronozone,” which helps users monitor their location, won the zeroth prize of $2,000 and a trip to the Dropbox headquarters in San Francisco.

For those of us generally unfamiliar with the world of computer science, the word “hackathon” may have a negative connotation. However, a hackathon is actually an event where students dedicate 24 or 48 hours to developing a project or application idea into a working application, using pre-existing external application programming interfaces (APIs) and a variety of web development tools.

Participants may work in teams of up to four people. At the end, each team presents their project to three categories of judges: the event organizers, a designated panel of judges, and sponsor judges.

The event organizers give away a “First Penguin Award” — inspired by Randy Pausch’s similar award — for the most daring idea. The sponsor judges, representatives from sponsor companies, give away prizes to their chosen hacks based on criteria such as “most impressive user interface” or “most technically challenging.” The designated panel awards first, second, and third prizes to the “hacks” they deem most innovative. Although all students may participate, only undergraduate students may submit their projects to be evaluated for prizes.

This year’s hackathon featured hacks that would be useful for many aspects of college life. One group was developing a long-term scheduling app.
“For four-year plans, and scheduling things in the long term, CMU doesn’t have anything really,” Vikram Sunder, a sophomore computer science major, explained. “The idea is that this app will take all the class information and build this giant directory.” The app will tell a user when to take a certain class and list the prerequisites.

Carnegie Mellon alumnus Joseph Swernofsky, who won honorable mention for his group’s online annotation app “AnnotateMe,” was a mentor this year. Mentors generally answer questions or help hackers through problems with their programs. In addition to student mentors, TartanHacks participants also had access to engineers from sponsor companies for help with their apps.

TartanHacks began last year, and was inspired by Penn Apps, a 48-hour hackathon that takes place twice a year at the University of Pennsylvania.
“Throwing a hackathon was suggested to me by Vinay Vemuri, the co-founder of ScottyLabs. He participated in PennApps in the fall of 2011, and we agreed that by bringing a hackathon to CMU we could convince people to use the APIs that we were creating,” Amy Quispe, senior in computer science and director of ScottyLabs, said.

“Initially, Amy wanted to develop APIs that would allow students to build apps around CMU’s datasets, i.e. scheduling, dining hours, and directory data,” said Quintin Carlson a junior Decision Science major and project manager of TartanHacks. “While that wasn’t exactly what happened last year, this year, we are launching an early alpha of ScottyLabs APIs.”

While TartanHacks may appear to be an event largely within the realm of those with technical backgrounds, it is an opportunity for people of a variety of fields to contribute.

“It’s absolutely possible for non-technical majors to get involved. We have students from majors across the school compete in TartanHacks. Designers from CFA, statisticians from Dietrich, and entrepreneurs from Tepper all come out for this event,” Carlson said via email.

For first-timers, organizers arrange for crash courses on building applications, as well as courses in languages such as JavaScript, HTML, and CSS prior to the event. There is also a “free agent mixer,” which is a social event to facilitate forming teams, typically held on the night before the hackathon.

“TartanHacks is an extremely friendly hackathon for first timers….In fact, in this next year ScottyLabs wants to focus on uniting designers and hackers more. User experience design and visual design are becoming increasingly important,” Quispe said.

TartanHacks can help students bring to life ideas that have lasting social implications. This year’s exhibit of “hacks” featured a mobile-based app that uses natural language processing to scan Facebook for posts from the user’s friends containing signs of depression or suicide. The app alerts the user via text message and posts an encouraging message on the wall of the Facebook friend. It also creates a link to a Google Hangout, which is texted to all friends of the depressed person who are users of the app, so that they can come together, via video conferencing, to help cheer him or her up.

With apps like this, TartanHacks is not limited to the technically savvy — it’s open to anyone with a desire to impact people’s lives.