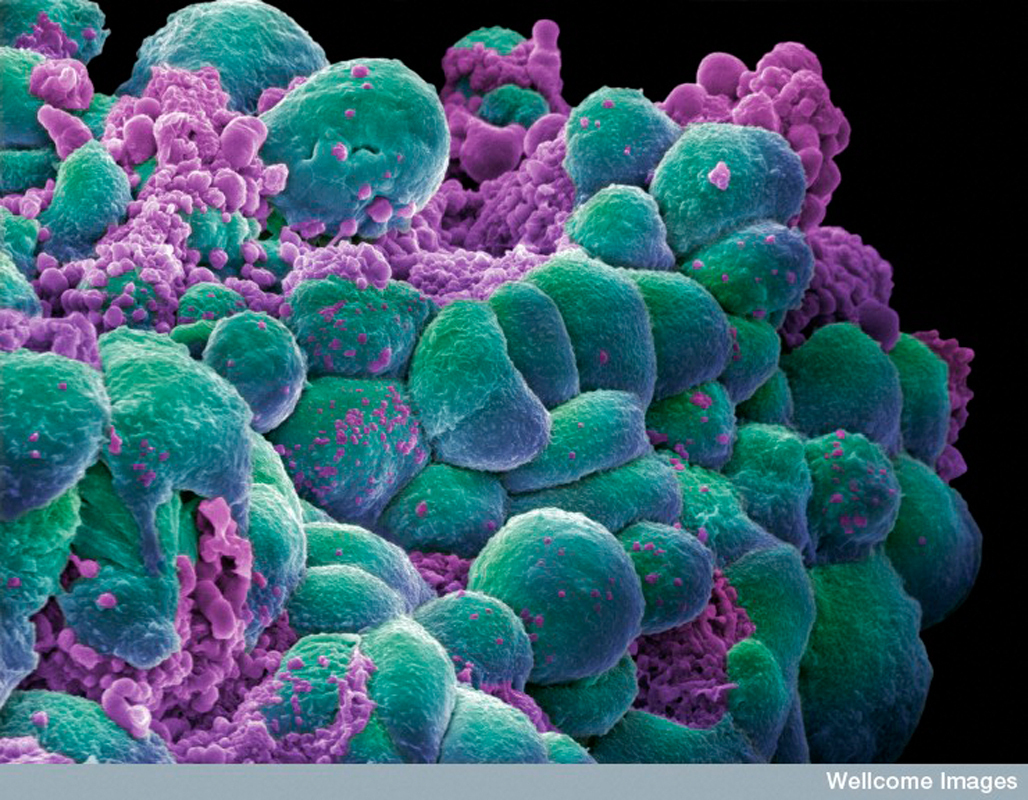 Carnegie Mellon researchers are developing a system that inspects thousands of images of cancer cells, such as those shown above, to improve cancer diagnoses. (credit: Courtesy of crafty_dame via flickr)

The discovery of a potential tumor can be a challenging experience for patients and physicians. While the patient needs to understand what’s going on, the physician has to decide if the tumor needs to be removed immediately. This process is not as clear-cut as it seems. There are relatively few tools available to help a physician determine what exact course of action should be followed, but researchers at Carnegie Mellon are about to help them out.

Robert Murphy, head of the Ray and Stephanie Lane Center for Computational Biology, and Gustavo Rohde, an associate professor with Carnegie Mellon’s department of biomedical engineering, recently received a $1 million grant from the Commonwealth Universal Research Enhancement (CURE) program to develop more specific cancer-detection computer programs. The project is also supported by a $500,000 grant from the Omnyx Corporation.

Murphy will be the lead director of the project; he and Rohde will be assisted by pathologists from the University of Pittsburgh Medical Center (UPMC).

Rohde and Murphy plan for the project to be able to analyze the tissues of thousands of patients — which, considering the rate at which scientists currently analyze tissue, is a huge innovation.

When a potential tumor is spotted, a patient undergoes a biopsy — the removal of a piece of tissue. As of now, to determine cancer verdicts, pathologists observe the cells in the biopsies in labs. These specialists use medical equipment, patient history, and broad knowledge to diagnose a tissue sample. Despite the pathologists’ expertise, the cancer diagnosis process can be relatively slow, and still relies on human judgment without much assistance.

In Rohde’s and Murphy’s project, images of the tissue would be entered into a computer program that would segment the image of tissue into smaller images of thousands of individual cells. Next, these cellular portraits would be compared to images of other cells — both cancerous and healthy — in the program’s data bank.

The program would then be able to use an algorithm to match the image of the cell with other similar or nearly identical images. Using stored information on the matching cell images, the program would determine the probability of whether the cell in question is dangerous.

Specifically, Rohde and Murphy’s research will focus on certain types of prostate and liver cancers.

Rohde has already created programs for such computer systems, usually using a data set of 10–15 people. This project will allow his lab to test the system on a much larger scale with thousands of people. And since it’s such an advanced undertaking, the program needs an incredibly large amount of data. Murphy and Rohde are collaborating with pathologists at UPMC to help gather the necessary information.

While Rohde’s primary focus is using data to match the images of cells, Murphy’s research focuses on the individual proteins of the cells. Each cell has thousands of proteins, too many to be feasibly observed by any human. Murphy’s lab, however, is aimed at looking at subcellular compartments referred to as organelles, and trying to decipher localized proteins that may be specific to certain liver or pqwancreatic cancers. The data would, like Rohde’s program, be able to tell the pathologist the nature of the proteins.

Rohde claims the project has the potential to make a large impact in the area of cancer research and identification. It’s important to note, however, that the program is just another tool to make cancer detection more efficient and effective. Rohde explained that it allows pathologists to perform tasks that humans can’t, like quantifying huge amounts of data.

Rohde is excited by the potential magnitude of the project. “When opportunity comes to transition this to the real world [it is] always exciting,” he said. “I think everyone appreciates the opportunity that, if this is to work well, [it] could be meaningful and good for a lot of people, for us professionally, but also for the greater good.”

The end goal of the entire project is to create a product that could be sold and used in a healthcare setting, rather than be a conversation piece for an academic’s office.