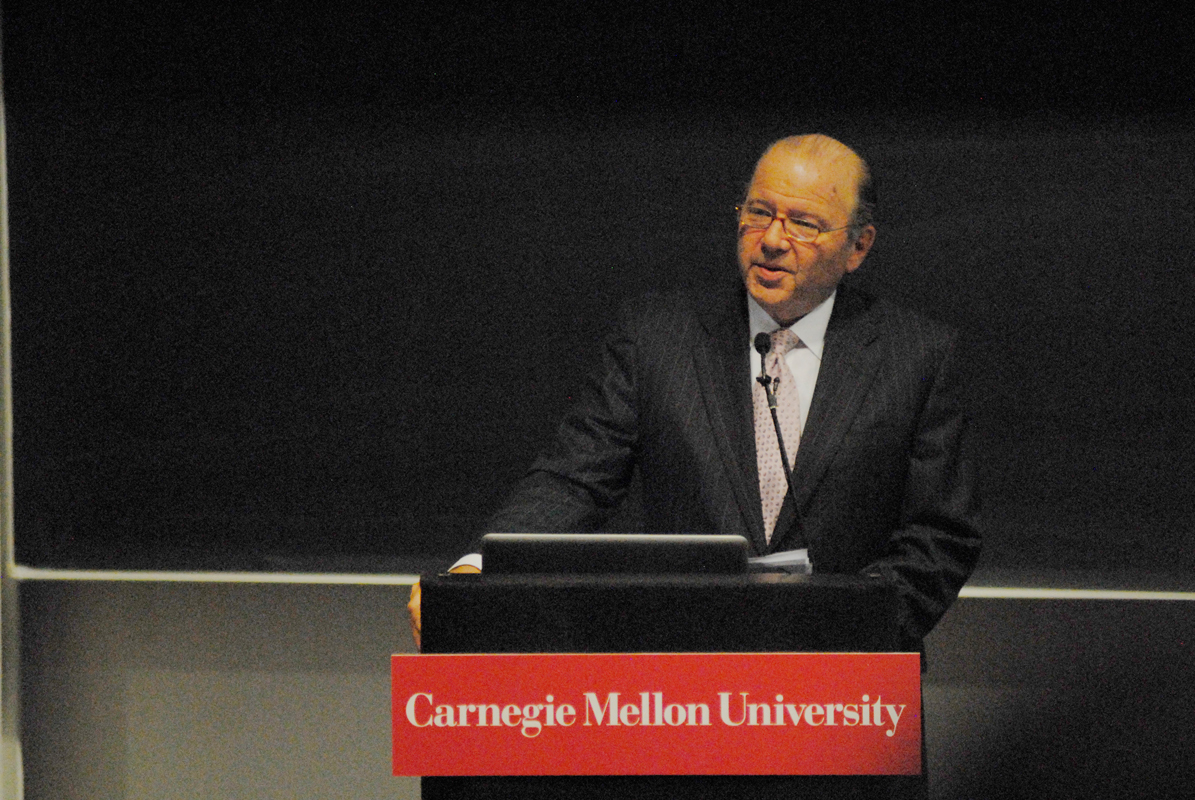 The campus-wide event — titled “From Technology to Policy: Energy Research at Carnegie Mellon” — had speakers to present and discuss Carnegie Mellon’s current role in the energy innovation of and plans for the Scott Institute. Speakers included President Jared Cohon; Granger Morgan and Andrew Gellman, the new Scott Institute’s director and associate director, respectively; and various Carnegie Mellon researchers who are already tackling the energy problem.

Morgan described how the new energy institute — housed in the Carnegie Institute of Technology but still a university-wide collaboration — will make Carnegie Mellon a “go-to” place in energy-related research and education, use resources to coordinate and promote synergy between colleges, and increase the university’s visibility.

The vision for the Scott Institute is to create a partnership of disciplines that act toward a better energy environment for the common good.

“Energy decisions unfold in critical, regulatory, environmental, and behavioral context, and we need economic, organizational, and policy solutions as much as we need new technology,” Cohon said. “This is an interdisciplinary challenge of the first order, and Carnegie Mellon simply does this cross-collaboration better than any other institution that I know.”

However, the speakers made clear that there are certain things the institute will not do.

Namely, Morgan said that the institute will not divert corporate membership from existing centers, take on research that others on campus are already doing, or dictate what others do and where external support goes on campus. It will be a collaborative center for researchers and an open place for outsiders and non-experts to learn about energy research.

Speaking at the energy symposium were 11 faculty members, many of whom are from or involved with Carnegie Mellon’s engineering and public policy department, ready to discuss their research and findings in the energy innovation front.

Topics ranged from, “Can low-cost batteries help us to use more renewables and build fewer transmission lines?” to “How will human behavior affect energy futures?” and “Are federal policies targeting the right plug-in vehicle?” Other topics represented national questions, like the validity of clean coal, and local issues, such as the advancement of local transportation.

Students will see the many graduate programs coming out of the Scott Institute and the new courses available to undergraduate students as direct impacts. The facility will also house research labs, including a state-of-the-art nanotechnology fabrication lab, and it will also serve as the home of the biomedical engineering department.

“We’re in position to make an impact on such a greatly important problem as this,” Cohon said. “It’s an opportunity that goes beyond just that — I view it as an obligation for Carnegie Mellon.”

The institute will be located in the soon-to-be-constructed Sherman and Joyce Bowie Scott Hall, a 100,000-square-foot building located among Hamerschlag, Wean, and Roberts Halls. This new building is named after Mr. and Mrs. Scott, two alumni whose donations helped fund the institute.

The Sherman and Joyce Bowie Scott Hall is slated to open in 2015.