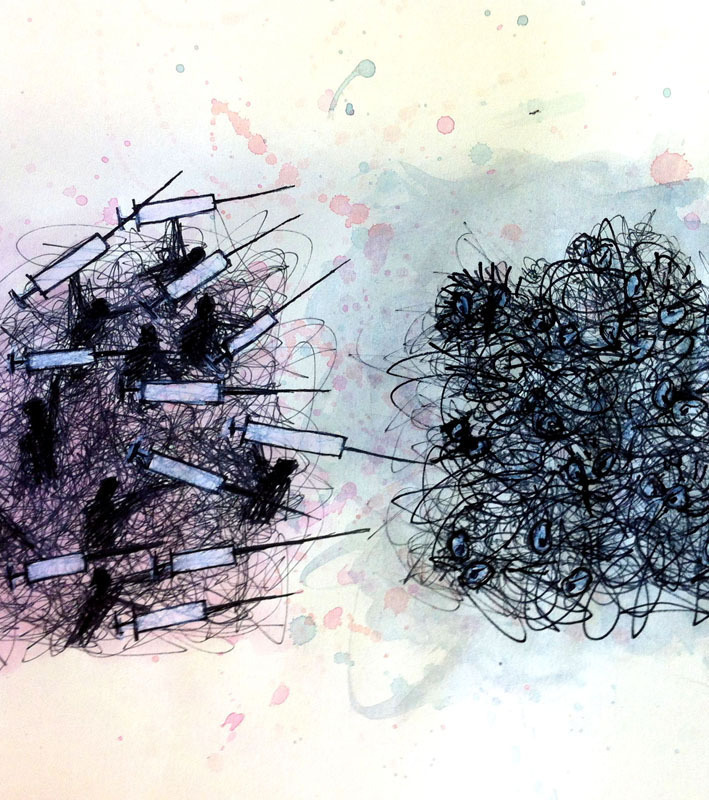 There’s a lot going on in the field of public health and vaccinology. According to NPR, researchers have been working on a vaccine to fight Dengue Fever, and Scientific American recently reported on the progress of a preventive medication for HIV. While these might seem more exciting than your annual flu shot, the process of how such vaccines work is complicated and fascinating.

The word for vaccine comes from the root word vacca — Latin for “cow.” According to the BBC, vaccines were first “discovered” in the 18th century when English physician Edward Jenner observed that milkmaids who got cowpox were immune to smallpox.

Taking advantage of the lack of patient consent laws, Jenner infected a healthy boy with cowpox and then purposely inoculated him with smallpox to test his hypothesis. Fortunately, the boy remained healthy, and vaccines gained some theoretical foundations.

Evolving from gambling with patients to annual flu shots, however, required more information about the human body. According to Discovery Health, vaccines rely on the basics of the human immune system. When foreign substances such as viruses and bacteria, called antigens, enter the body, the immune system responds by producing proteins.

These proteins, known as antibodies, destroy the antigens. Antibodies are produced by white blood cells, called lymphocytes or B-cells. Once the body produces B-cells against a particular antigen, it stores the information for future infections.

Here is where vaccines come in. When someone receives a flu shot or uses a nasal spray, the virus is being physically inserted. The two categories of viruses are “live” and “inactivated.” In live vaccines, scientists create a much weaker version of the antigen before releasing it to the public. These live vaccines can make a few patients mildly ill.

Inactivated vaccines are usually made by killing bacteria in a chemical and then adding pieces of the dead antigen to the vaccine. Allergic reactions to vaccines are very rare, and because the antigen is inactive, there’s no risk of becoming ill.

A vaccine is made up of more than just an antigen, however. Many are packaged with chemicals to help stabilize them during distribution. Additionally, those used for multiple doses come equipped with a disinfectant to kill any foreign material that may be inside the needle.

When creating a vaccine, scientists spend a lot of time studying the antigen and how it causes disease in the human body. The vaccines are cultured in live chicken eggs for a few days to incubate. This is why those with egg allergies, for example, cannot receive the flu vaccine.

The testing stage for a proposed vaccine is long and complicated; it has to undergo years of study to make sure it’s effective, and then it must be tested on healthy adults and target demographics. The trials are closely monitored by governmental organizations, such as the Food and Drug Administration or the Centers for Disease Control and Prevention (CDC).

As for the flu shot, scientists are never completely sure the vaccine will protect against a particular strain. The influenza virus mutates hundreds of times per year, so choosing the right strain to fight against is difficult. Fortunately, scientists are often close enough to make an effective vaccine.

As flu shots are already being advertised outside Rite-Aid and Giant Eagle, it may be time to start thinking about getting one. For the upcoming flu season, the CDC says it is especially important for people who hold a high risk of developing pneumonia from the flu, such as those who are over 65, pregnant, or have respiratory conditions.

The CDC notes, however, that everyone over the age of four months should try to get a flu vaccine.