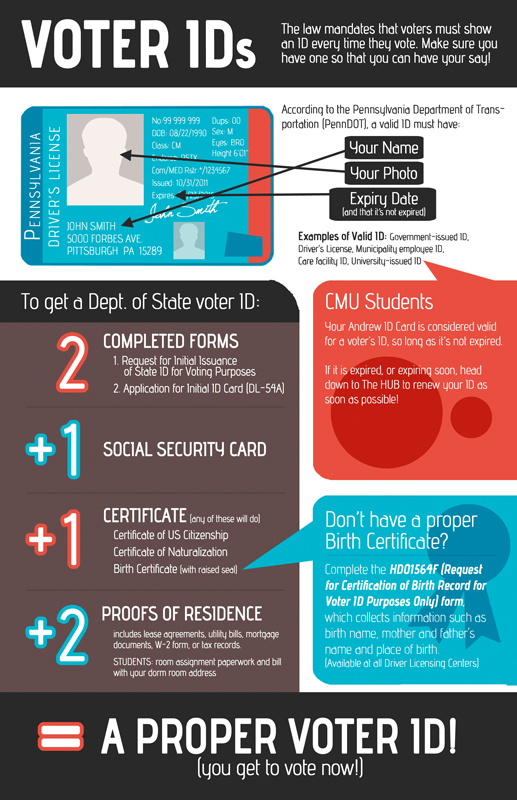 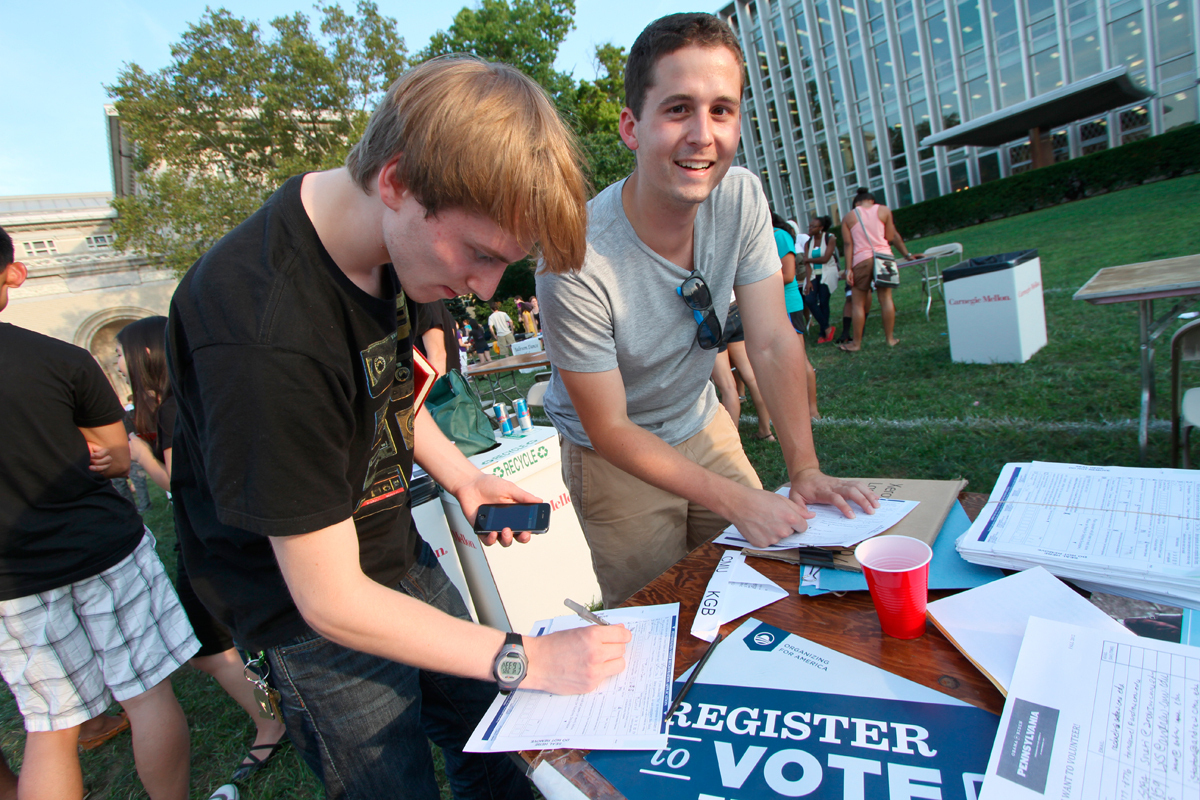 For the upcoming election, a new Pennsylvania law passed in early August requires that all voters, including students, must present some form of government-issued photo identification at the polls.

The Voter ID Law specifies that the identification used must have a picture and an expiration date. As Carnegie Mellon student IDs have both already, students are allowed to use their student ID in place of a state-issued ID. This holds true for 15 other universities in Pennsylvania, including the University of Pittsburgh. All other universities do not issue IDs that expire. In these cases, the university can issue stickers to put on student IDs to give them expiration dates.

“We’re working with universities that issue stickers — because if you have an ID card that expires, it counts, and the stickers expire, so they make the student ID card count,” Daniel Walker-Murray, a campus organizer for the Pennsylvania Public Interest Research Group (PennPIRG), said. “We’re trying to get them to issue these stickers before the election.”

According to the website of U.S. PIRG — the federation of state PIRGs — PennPIRG is one of 47 lobbying groups for college student interests. One of PennPIRG’s goals is to get students to register to vote. Its goal for Carnegie Mellon is 1,000 students. Since the Voter ID Law was passed, PennPIRG members have also tried to inform as many students as possible about the new law.

Walker-Murray said that the law hinders a citizen’s ability to vote. “We’ve actually done research and found that it targets three groups: students, the elderly, and the impoverished.”

Walker-Murray explained that students don’t typically have driver’s licenses, so the law affects them in that sense. Those living and working in the city are also greatly affected by this law because they generally use public transportation and don’t have driver’s licenses, according to University of Pittsburgh law professor Jessie Allen.

Carnegie Mellon students’ opinions of the law are split. Some, such as junior economics major Avery Calkins, are uncertain about the implementation. “Personally, I think that it shouldn’t go into effect this year because it’s really hard to get a government-issued ID,” she said. “They should give that time.”

Calkins also questioned the efficacy of the law.

“I think that [our ability to use student IDs] has its good and bad points, because it’s important for students to be able to vote,” she said. “But if the government is really so gung-ho about the Voter ID Law and trying to crack down, then why are they allowing IDs that wouldn’t be accepted at the airport?”

Other students, such as first-year mechanical engineering major Nick Gray, support it completely.

“I think it’s necessary,” he said. “I think people need to prove who they are, and if people are unable to vote because of financial reasons, they should just ask the government for help.”

“It seems like an extra hassle,” Rachel Fowler, first-year business major, said. “But it also makes sense, because without a photo ID, someone could commit fraudulent voting.”

However, Allen said there is no evidence that the type of fraudulent voting this law will prevent even exists.

“There’s no evidence, and the state of Pennsylvania admits they have no evidence, that that kind of voter fraud is possible. They even signed a stipulation in the court that, even if this law is not put into effect, this fraud may not even happen. It’s all a hypothetical situation,” she said.

“I really think that voter ID laws are a solution in search of a problem,” she said. “I think certainly they will keep some people from voting.”

“Nine percent of the Pennsylvania electoral voters don’t have the right ID. That’s 750,000,” she continued. “Apart from the people that will actually be prevented from voting, the implications of a law like this that has recently been passed will cause a whole bunch of other problems, because people don’t know about it.”

According to Allen, there is currently a lawsuit to overturn the Voter ID Law.

“This is a case in the Pennsylvanian State Court brought by the ESLU Advancement Project, which is the national justification project, and some law firms representing a bunch of Pennsylvanian people,” Allen said. “They’re [the people] unable to get the required ID and they, and many others like them, will be unable to vote because of this law and this law violates their constitutional right.

“Earlier this summer, a state trial judge refused to stop the law, saying the plaintiffs had failed to prove to him that this law was unconstitutional and failed to prove that a large number of people would be kept from voting,” Allen explained.

The issue stems, Allen said, from a disagreement over the purpose of the law.

“The question of why [this law was passed] is debated,” she said. “The state legislators who passed the law say ... that the reason we need such a law is to prevent voter fraud. The people who are challenging it as unconstitutional say that there is no problem of voter fraud that would need [a photo ID] and that it is to suppress people from voting.”

PennPIRG will host a press conference on Wednesday to educate students about this new law and to tell them about their ability to use their Carnegie Mellon student ID card in place of government-issued identification.

“One of the main reasons we’re here is because of the Voter ID Law,” Walker-Murray said. “Personally, I believe that it’s our constitutional right [to vote], and it’s a shame that there’s a sense of student apathy. People think students don’t care.... People in other countries are dying for this opportunity.”