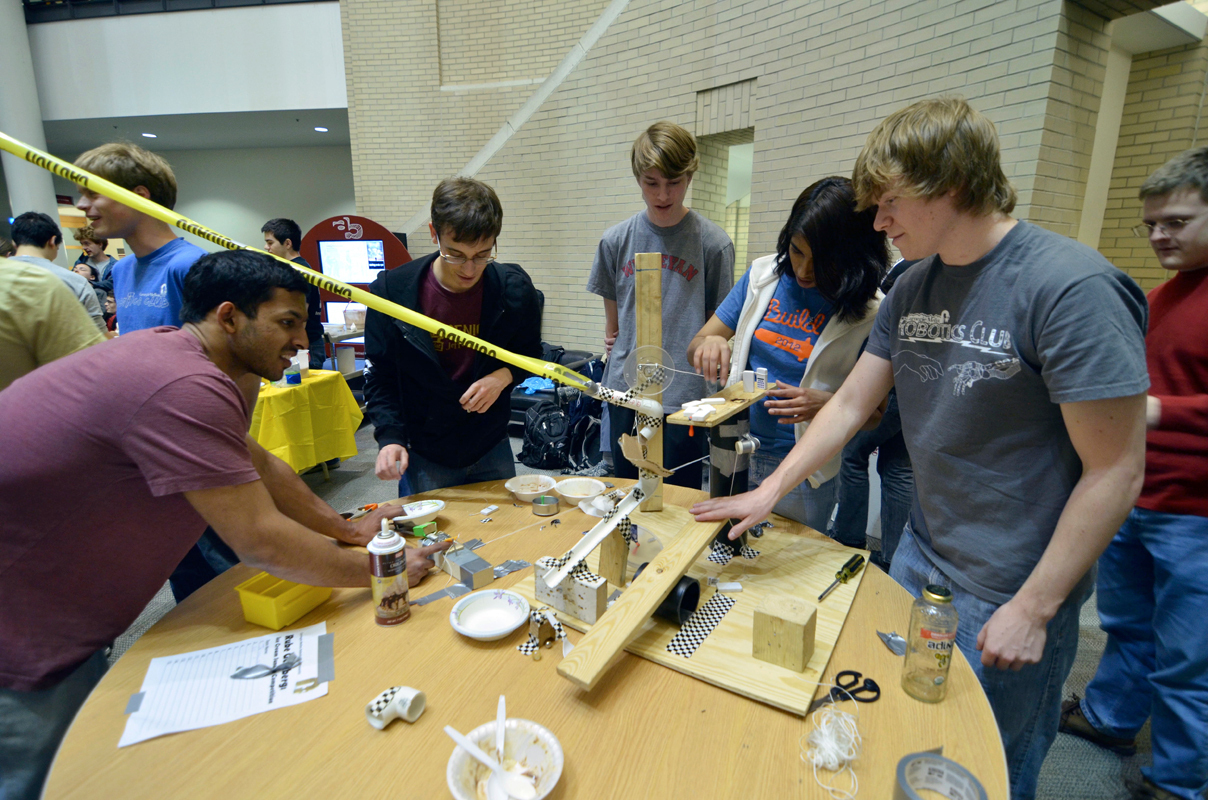 Students gathered in the University Center Friday night to build complex machines that would scoop ice cream and place it into cones. The event was hosted by the Robotics Club. (credit: David Chang/Staff)

Students worked vigorously to top their ice cream at the University Center (UC) Friday night, as Robotics club hosted the Annual Rube Goldberg Ice Cream Competition. The competition, which began at 9 p.m., was part of the UC Late Night series held every Friday.

The competition is inspired by Rube Goldberg, a cartoonist and inventor who worked in the 1940s and ’50s. Known for his complicated machines that performed only basic tasks, the name Rube Goldberg is synonymous with performing anything simplistic in a complex manner. Popular games like “Mouse Trap” are inspired by Goldberg’s legacy.

Students had wood, PVC pipe, string, duct tape, and other materials at their disposal, all provided by Robotics Club. By the time midnight rolled around, the UC had been transformed into a funhouse of sorts, with caution tape and string spanning across Kirr Commons and tables topped with bizarre-looking contraptions.

The judging began with one team’s machine that included a zip-line. Other competitors utilized dominoes, funnels, ramps, and mousetraps to put toppings on their sundaes.

The winning team, aptly named “Balls Dropping from the Sky,” started with a ball dropping from the second story of the UC, transported to the machine via caution tape. The ball then set off a series of events that ended with a cup of vanilla ice cream with a cherry, M&Ms, and sprinkles.

Although some of the teams failed, all the competitors were lighthearted and in good spirits. According to Priyanka Deo, a sophomore computer science major and social chair of Robotics Club, failing is a part of robotics. “Even though some of the projects failed, everyone was able to be innovative and try new things,” she said.

Robotics Club was founded in 1984, making it one of the oldest robotics clubs on the collegiate level. Today, the club reflects the same quality found in the ice cream competition: a fun, laid-back environment where tech junkies get together and build things.

Aside from the Goldberg contraptions, club members are working on an assortment of projects. Currently in the mix are robots that can move underwater, as well as “colony robots” that are able to localize, form colonies, and act as a single unit. One project called “RobOrchestra” seeks to develop self-playing instruments like the Vibratron.

“[The Vibratron is] a big circular xylophone that you play by dropping ball bearings on the keys at the right time,” explained junior computer science major and Robotics Club member Alex Zirbel. The machine is about four feet in diameter, with all 32 keys positioned around a ring.

Despite the intensity of some of the projects, the members stress the friendliness and receptiveness of everyone there. “The best thing about Robotics Club is the community,” said Pace Nalbone, a junior mechanical engineering major in Robotics Club.

“You can walk in anytime and talk to somebody, and people will help you,” Zirbel said. “You can even come in and ask for help on a homework problem and people would give you advice on how to solve it.”

The ice cream social gave students a taste of what being in Robotics Club is like. “We just got together, took stuff that we had, and made cool things,” Deo said.