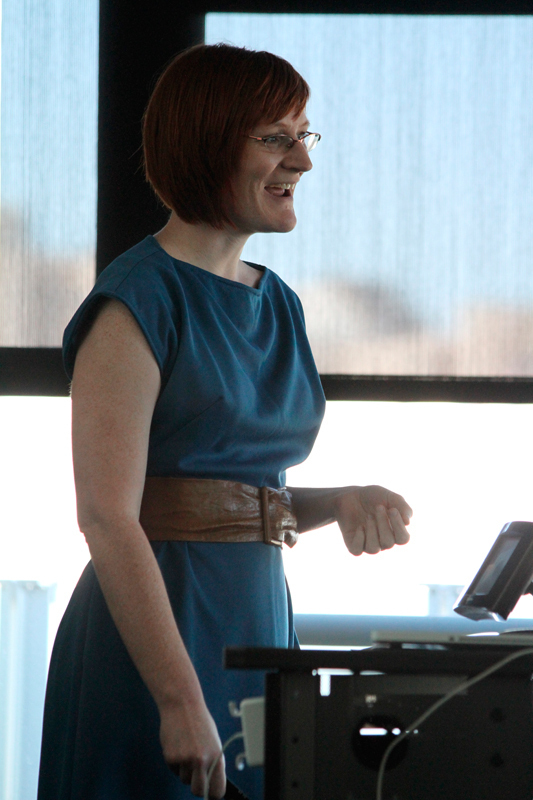 Maggie Koerth-Baker, the science editor of BoingBoing, discussed the lessons that the history of the electric grid can teach about innovation. (credit: Jonathan Carreon/Photo Editor)

Maggie Koerth-Baker, the science editor of the group blog BoingBoing, spoke to several dozen graduate students and professors about systemic changes in sustainability on Friday.

During the lecture, which was part of the Sustainability and Computer Science seminar, Koerth-Baker focused on the history of the development of the electric power grid, and the lessons it can teach about how progress is made.

“I like this story because I think it’s part of a problem we have with the way we talk about innovation,” Koerth-Baker said. “We like to tell ourselves these narratives about one guy who comes up with one really good idea that changes the entire world. But in reality, there’s usually a lot of failure involved in that process, and there’s usually a lot more people.”

Koerth-Baker told the story of how the electric grid has evolved from its first failed implementation in Appleton, Wis., to the system we have now. According to Koerth-Baker, the changes involved work on a large scale from many people: electric companies that pushed to find and market new ways to use electricity, scientists who made breakthroughs in technology, and politicians who implemented the grid.

However, she said that as a result of the patchwork way in which the grid was built, it also has systemic problems that hurt its sustainability. “It was optimized to go up quickly. It was optimized to be cheap. And, as the engineers know, that leaves the third leg, which is actually working well,” she said.

Koerth-Baker said that although there are small things people can do to increase efficiency in their daily lives, the U.S. will only really become more energy-efficient when the system is changed to make efficiency easy. She pointed to local power generation, increased power storage in the electric grid, and “smart grids” that monitor customers’ energy usage as potential large-scale changes that could have positive effects on the sustainability of the electrical system.

Audience questions mainly focused on practical ways researchers and others can help to implement systemic changes. People asked questions ranging from how the public image of smart grids might hurt their usage to how aware and knowledgeable Congress and the White House are about energy problems.

Koerth-Baker said that systemic changes could be difficult to implement, especially considering the average politician’s technological literacy. “Politicians know what your grandma knows,” she said. She gave advice on teaching about science and advocated making science students write more throughout their education to improve communications between laypeople and the scientific world.

“I think scientists can really benefit from blogging,” Koerth-Baker said. “It’s an opportunity to learn to write better about science and communicate with an audience.”

Koerth-Baker said that the internet has increased the amount of contact people have with science, and that since science blogging became popular, the average person’s scientific knowledge has increased.

Audience members agreed that the lecture was informative. “I think she did a good job of explaining how things came about, and where the infrastructure came from, and the different perspectives people have — how the utility companies think, how the government and how the users view the grid,” said computer science Ph.D. student Timothy Zhu.

Before the Lights Go Out, Koerth-Baker’s book about the history of the development of the electric grid and the lessons that can be taken from it, was released last Tuesday.