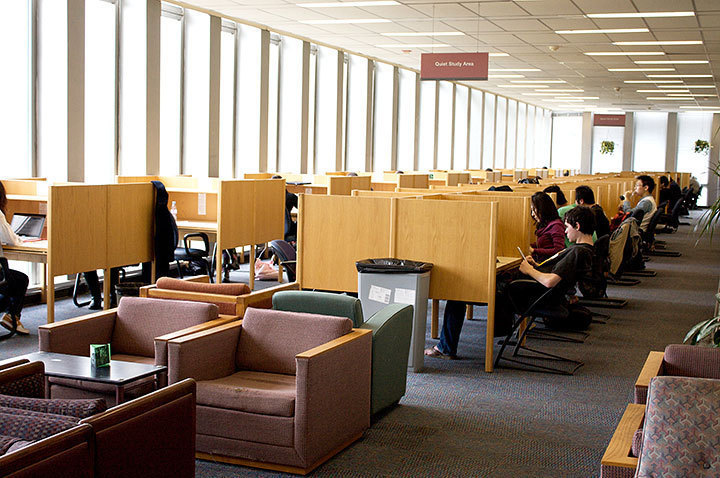 The third floor of Hunt Library provides a quiet study environment that works to some students’ advantage but proves to be too quiet for others. (credit: Travis Wolfe | Photo Staff)

Hunt Library, the Mellon Institute Library, and the Sorrells Engineering & Science Library in Wean Hall were the targets of bomb threats Tuesday morning. A campus alert message posted at 9:35 a.m. said that police were searching the buildings, but a mandatory evacuation had not been ordered. A follow-up announcement at 10:30 a.m. stated that the libraries had returned to normal operations.

Both the campus alerts website and other parts of the main Carnegie Mellon webpage went offline due to heavy traffic following the announcements. The initial alert message had instructed users to visit the invalid URL "www.cmu.edu/slash alert" — instead of the correct address www.cmu.edu/alert — for further details.

Randal Bryant, the dean of the School of Computer Science, sent an email to members of the administration alerting them to and complaining of the problems with the emergency alerts. In addition to the problems with the website, Bryant said that some people found the voice alert garbled, were unable to repeat the message, and were confused as to what they should do after receiving the alert. He also said that the multiple channels for alerts made the process chaotic.

"I'm not criticizing people for doing a bad job," Bryant wrote in a separate email. "There are many complexities in creating a system that has to work reliably in an emergency situation. The most important task now is to analyze where things went wrong today and what steps can be taken to make things better."

Madelyn Miller, the head of Carnegie Mellon's Environmental Health & Safety (EHS), acknowledged that there were some problems with the emergency response.

"I had a lot of really positive responses more than the negative, but the one from Randal Bryant went to my boss," Miller said. "He gave some constructive criticism, which I thought was nice."

Miller said that EHS is looking into ways to improve the system. One option which they are considering was suggested by Bryant: changing the alerts website from www.cmu.edu/alert to alert.cmu.edu. According to Miller, the invalid URL was sent out because of a flaw in alert vendor SendWordNow's handling of special characters. A URL change might eliminate that problem.

Miller said that the problems loading the website occurred because of server overload due to the incorrect URL, and because a server crash earlier in the week rendered the site fragile.

The emergency response also went well in many ways, according to Miller. "We sent out another message with another URL," Miller said. "The voice messages went out great. I was really happy that the all-clear note said, 'Look, this is a federal offense, and we’re going to go after you who ever you are.' We didn’t just take this lying down."

Miller also pointed to some of the ways in which SendWordNow has improved alerts, such as overcoming the text message character limit to concatenate two or three text alerts into one longer one.

The threatened buildings were not evacuated, although students were encouraged not to enter until a search had been conducted. Miller said that the university chose not to evacuate because the threats were considered low level.

"This was something that came in through an email, and so we considered it a low-level threat," Miller said. "We really had a lot of buy-in for allowing people to leave if they felt uncomfortable, but just make it a choice."

Junior electrical and computer engineering major Jecolia Longtchi, who was on her way to the library when she got the alert, said that she felt the university chose correctly. "I’m glad they didn’t evacuate because it’s finals week, people are studying, and it’s probably just one of the jokers," Longtchi said.

Before Tuesday, the last Carnegie Mellon bomb threat occurred Feb. 27, when University Police and the Pittsburgh Bomb Squad evacuated and searched Warner and Smith halls. The threats here have bookended a series of more than 30 separate multi-building threats at the University of Pittsburgh, most of which occurred in March and April.