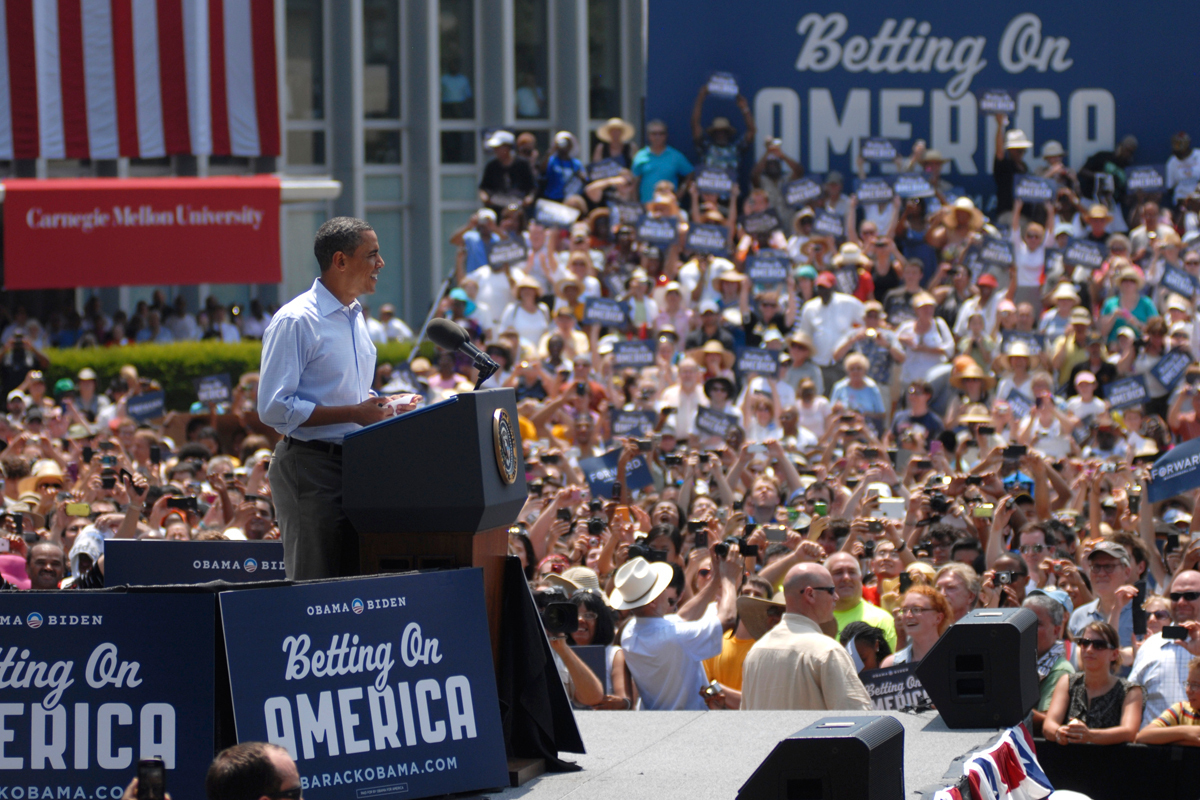 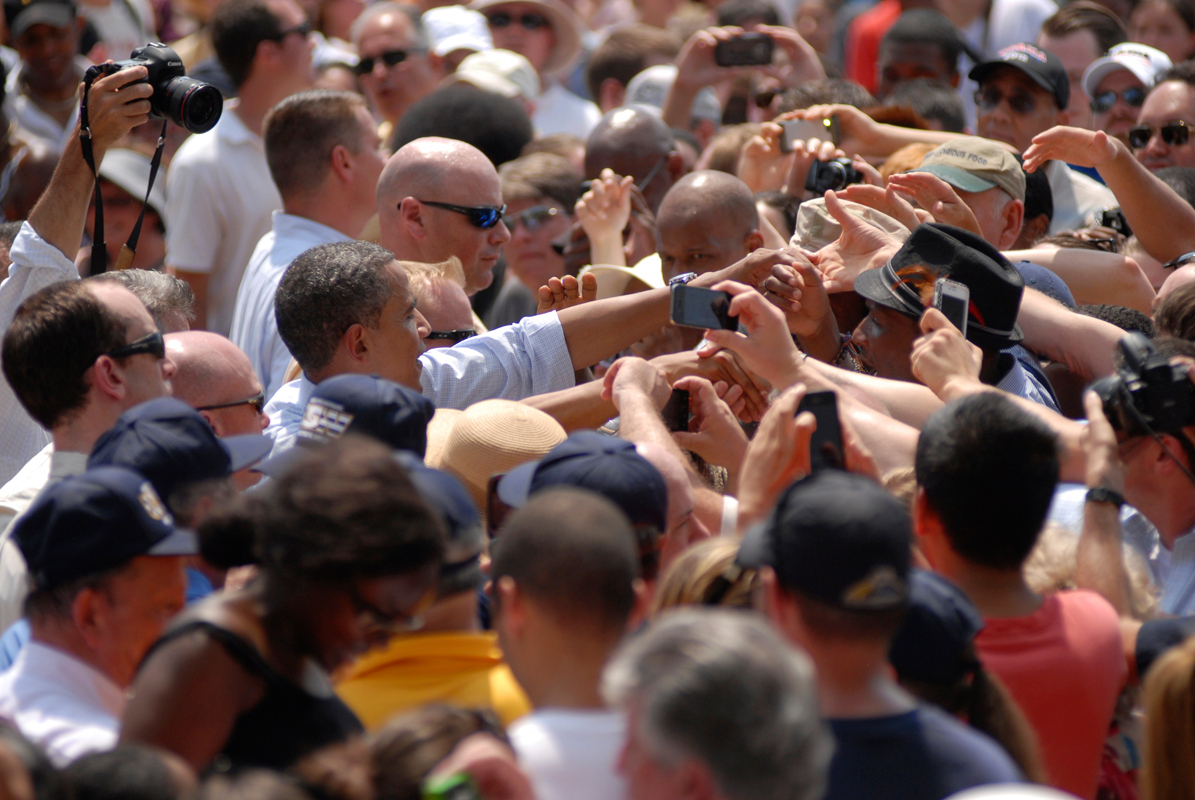 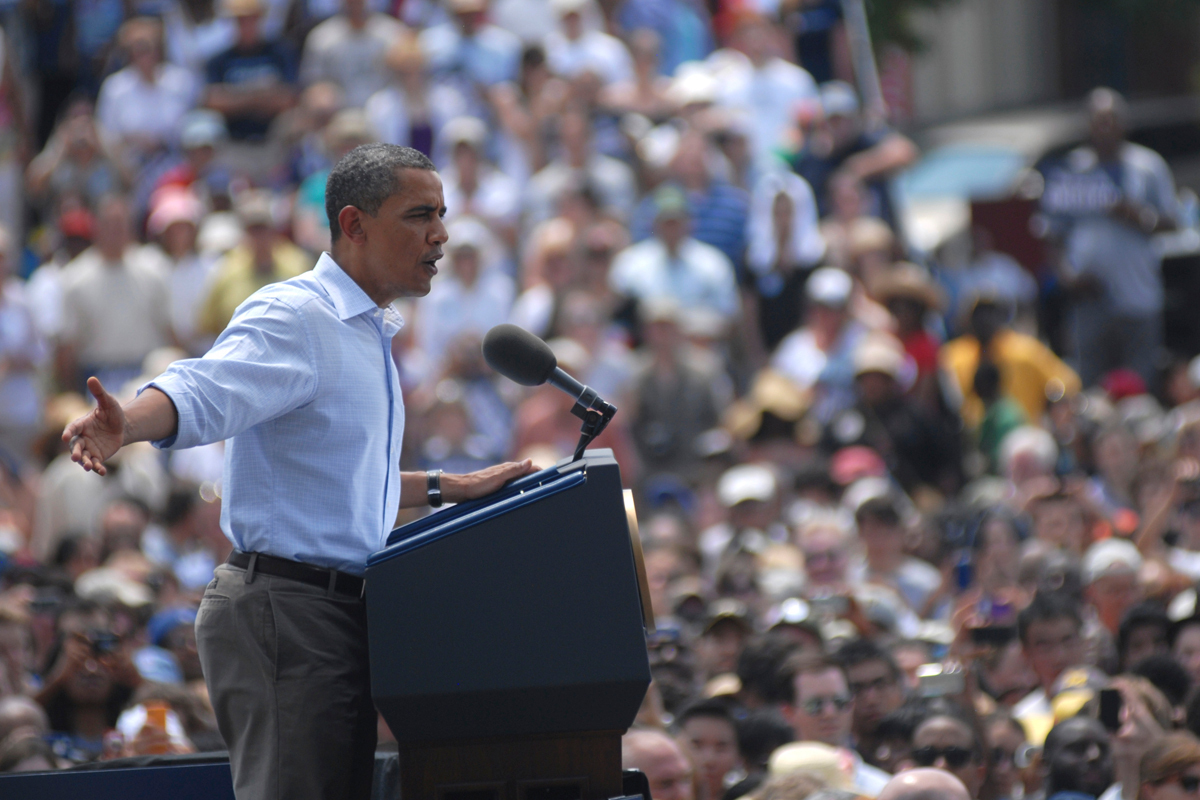 President Barack Obama addresses a crowd of thousands Friday on the CFA lawn. Obama was at Carnegie Mellon at the end of a two-day bus tour. (credit: Kate Groschner/Photo Staff) 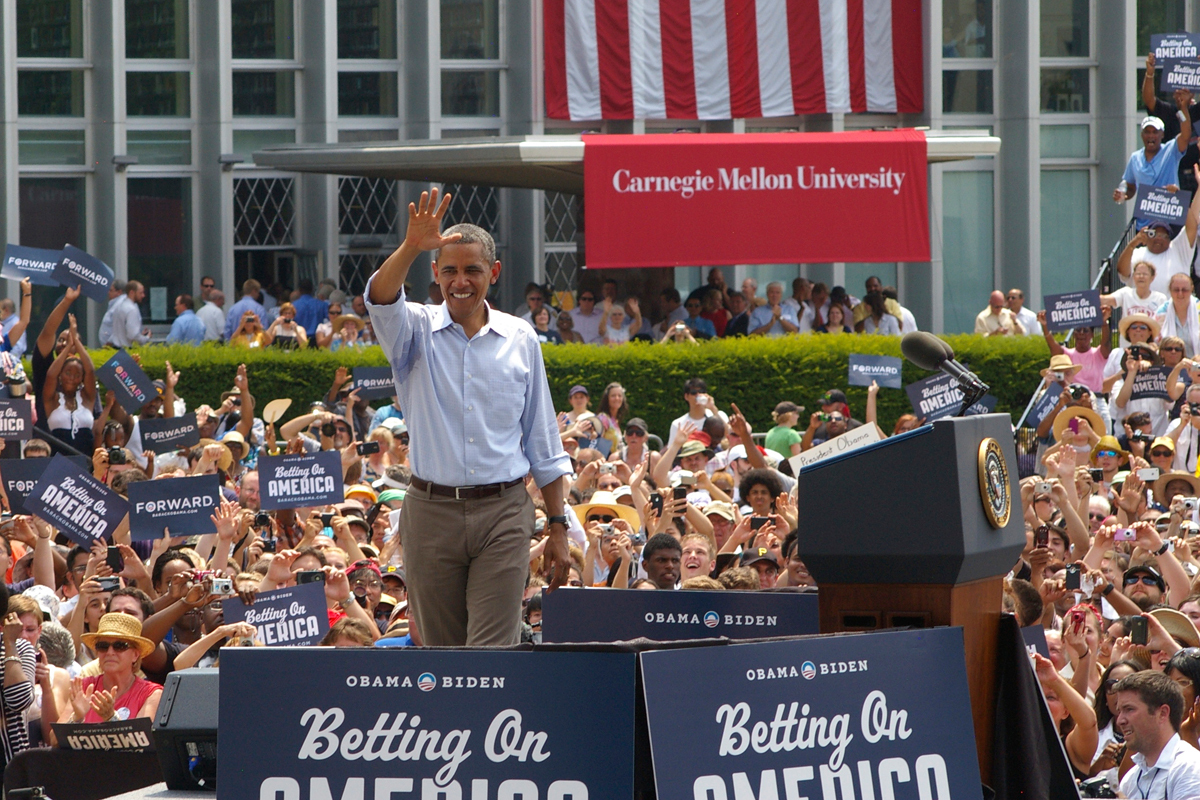 President Barack Obama waves to the crowd after his speech on the CFA lawn Friday afternoon. (credit: Greg Hanneman/Contributing Editor) 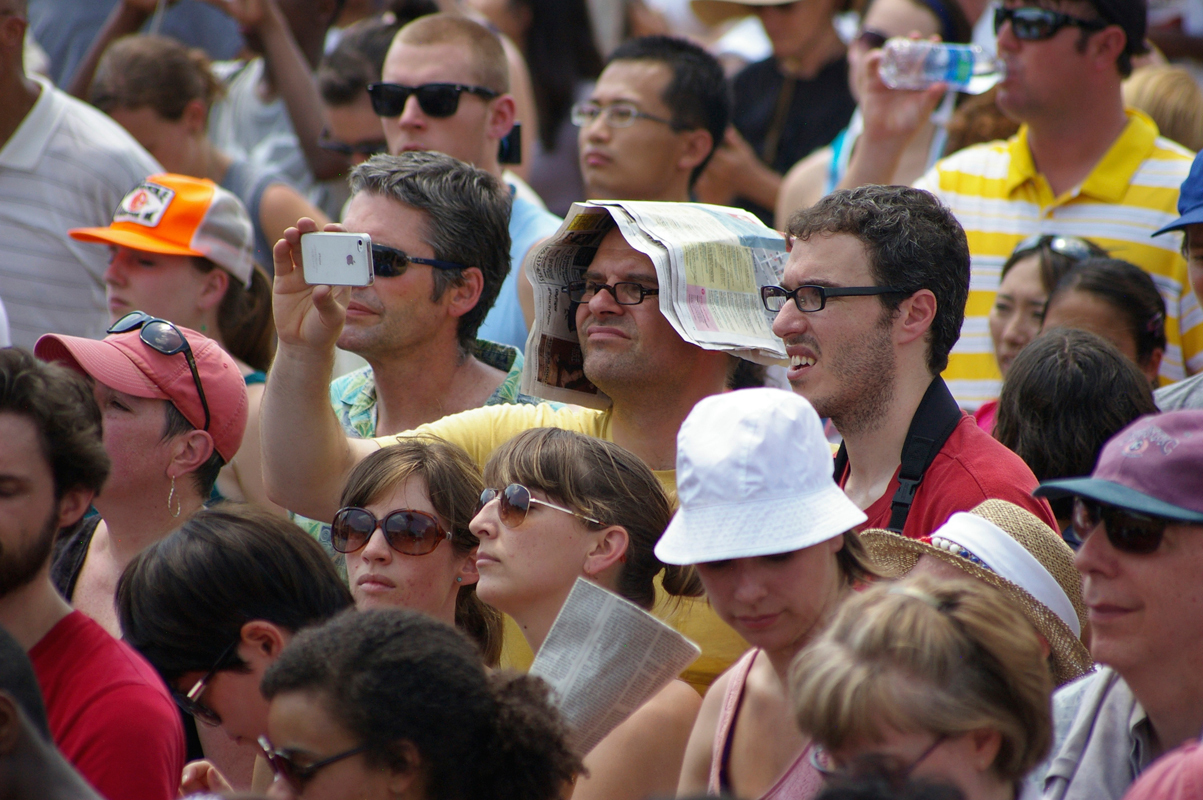 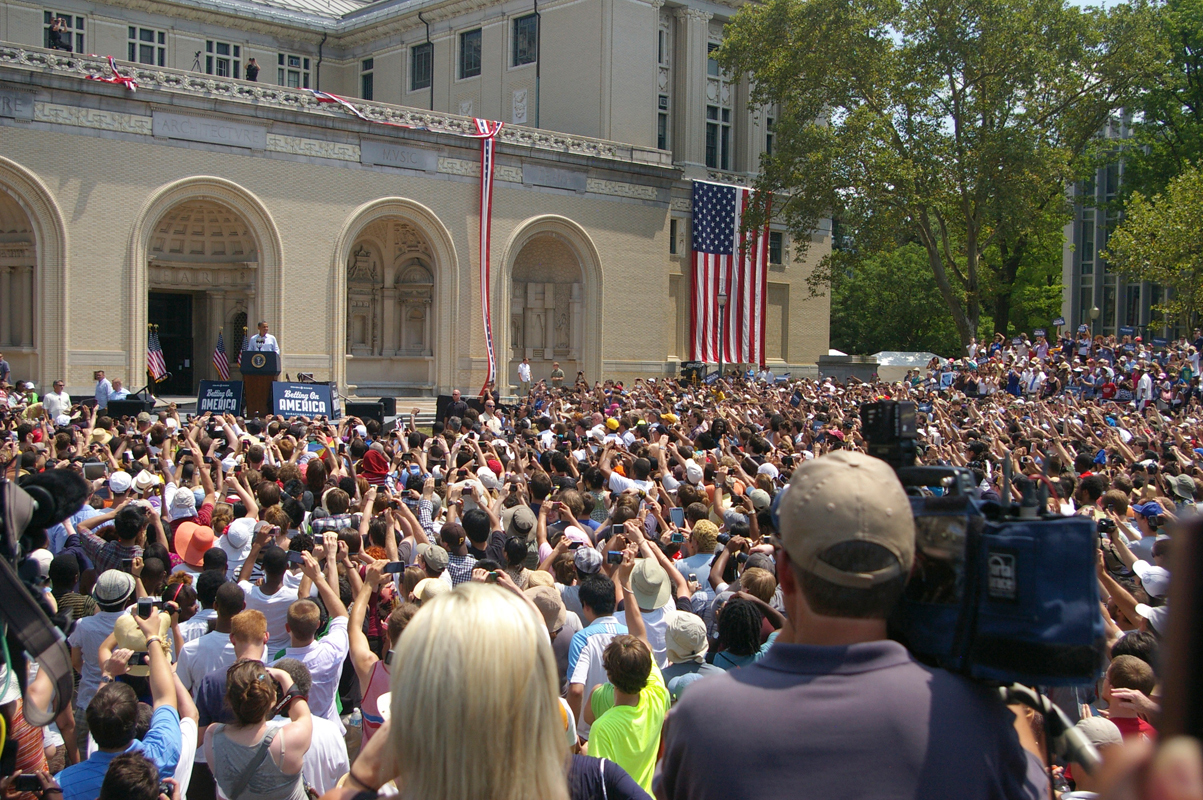 A crowd of thousands cheers President Barack Obama during an appearance at Carnegie Mellon Friday. The university gave out around 1,000 tickets for the event; others were available to the public through Pittsburgh-area Obama campaign offices. (credit: Greg Hanneman/Contributing Editor) 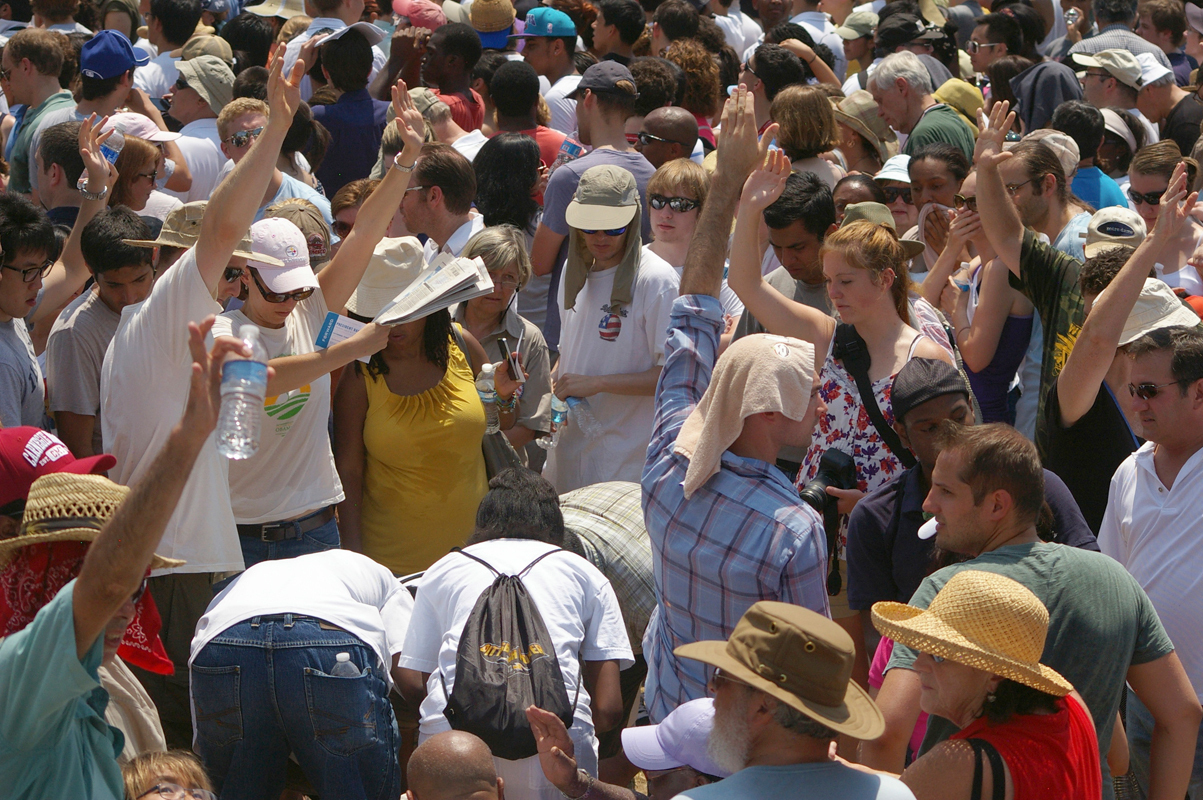 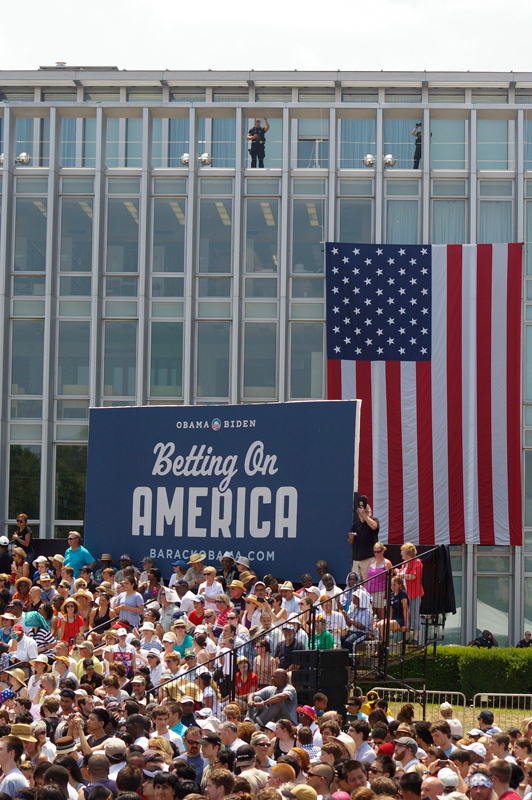 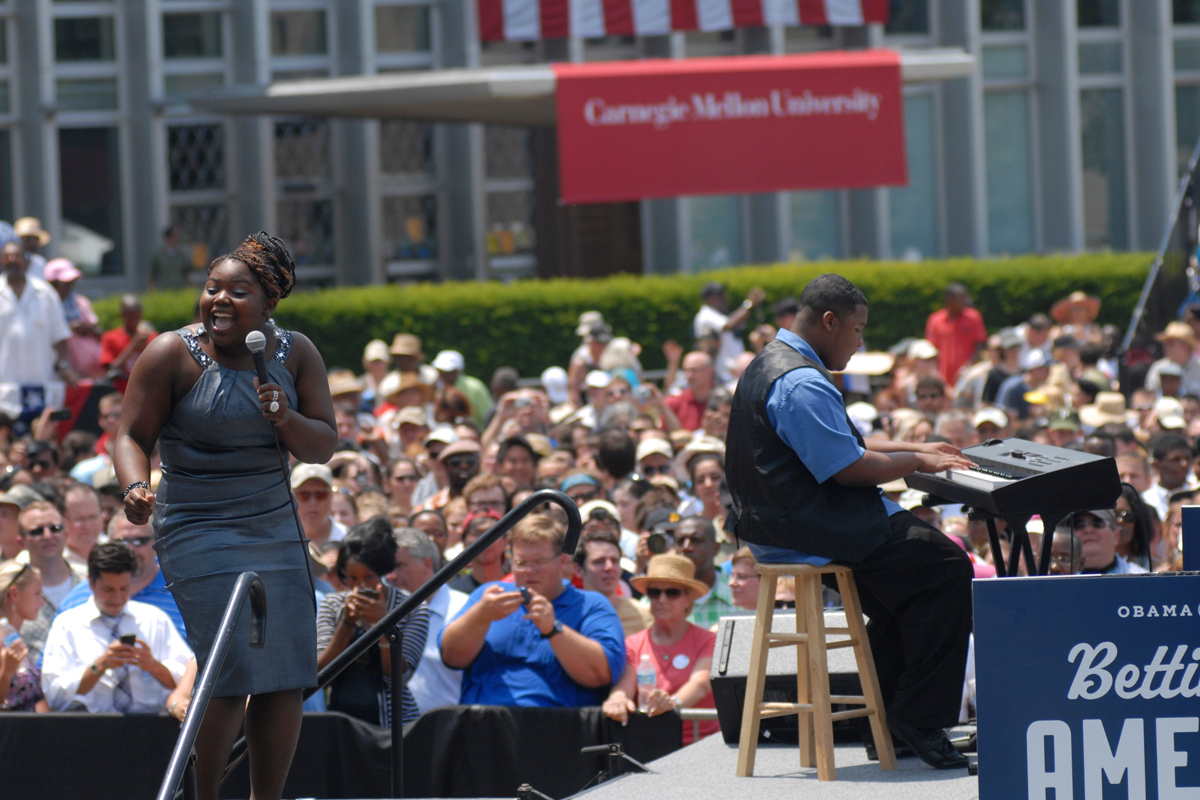 Thousands of Pittsburghers weathered temperatures in the mid-90s Friday to see President Barack Obama speak on the College of Fine Arts lawn.

The president visited Carnegie Mellon as the last stop of his two-day “Betting on America” bus tour of northern Ohio and western Pennsylvania. Obama delivered campaign speeches in six Ohio towns before arriving in Pittsburgh midday Friday. His speech, which painted in broad strokes his plan to “turn this country back” to a strong middle class, was timed to begin at 2:10 p.m. This was Obama's third visit to Carnegie Mellon in two years.

Obama competed for his audience with a sunny, 94-degree July afternoon. With attendees arriving up to three hours before the president’s appearance, city and university paramedics treated several people for heat-related illnesses before the event began. Volunteers passed out bottles of water and sprayed water over the crowd, but attendees still regularly shouted for medics.

Pittsburgh EMS crews transported 13 people from the event to local hospitals, according to Rescue Division Chief Bob Farrow. He said that city paramedics treated about 20 patients in total, and more were attended to on-site by Carnegie Mellon EMS or sought treatment on their own in the medical tent and cool-down rooms.

“I think it went really well considering the circumstances," Farrow said. "We got to everybody real quick, and nobody was what I would consider life-threatening.”

Opinions in the crowd were mixed about the event being held outdoors.

“Whoever planned this should be fired,” said senior international relations and politics major Chris Sparks. “We have space inside for this, and ... five or six people passed out in the last 60 minutes.”

Jordan Gibson, a master’s student in music performance, was more forgiving. “I managed to get in the shade, but once that went away, people were dropping like flies, especially the older people. But I thought it was worth it to see [Obama] speak.”

Thousands of area residents attended the speech after registering for tickets early in the week at the Obama campaign’s local offices. Carnegie Mellon also handed out approximately 1,000 tickets for the event, which could be claimed by students, faculty, staff, and alumni at the University Center Info Desk.

He said that that middle-class ideal has been “getting battered a little bit over the last decade.”

Obama also summarized his record as president since 2008 and offered a program of future investment. Without giving specific details, the president proposed reallocating money that would have been spent on wars in Iraq and Afghanistan in favor of employing Americans to improve U.S. infrastructure.

“Let’s put some Americans back to work rebuilding our roads and our bridges, our schools. Let’s build broadband lines and wireless networks and high-speed rails. Let’s invest in the basic science and research that helped to send a man to the moon and created the internet.”

After the speech, Obama did a traditional hand-shaking pass through the crowd. “I liked him [in 2008] and I liked him now,” said retired Crafton resident Fredericka Lewellyn. “I love him. Matter of fact, you know what? He gave me a kiss.”