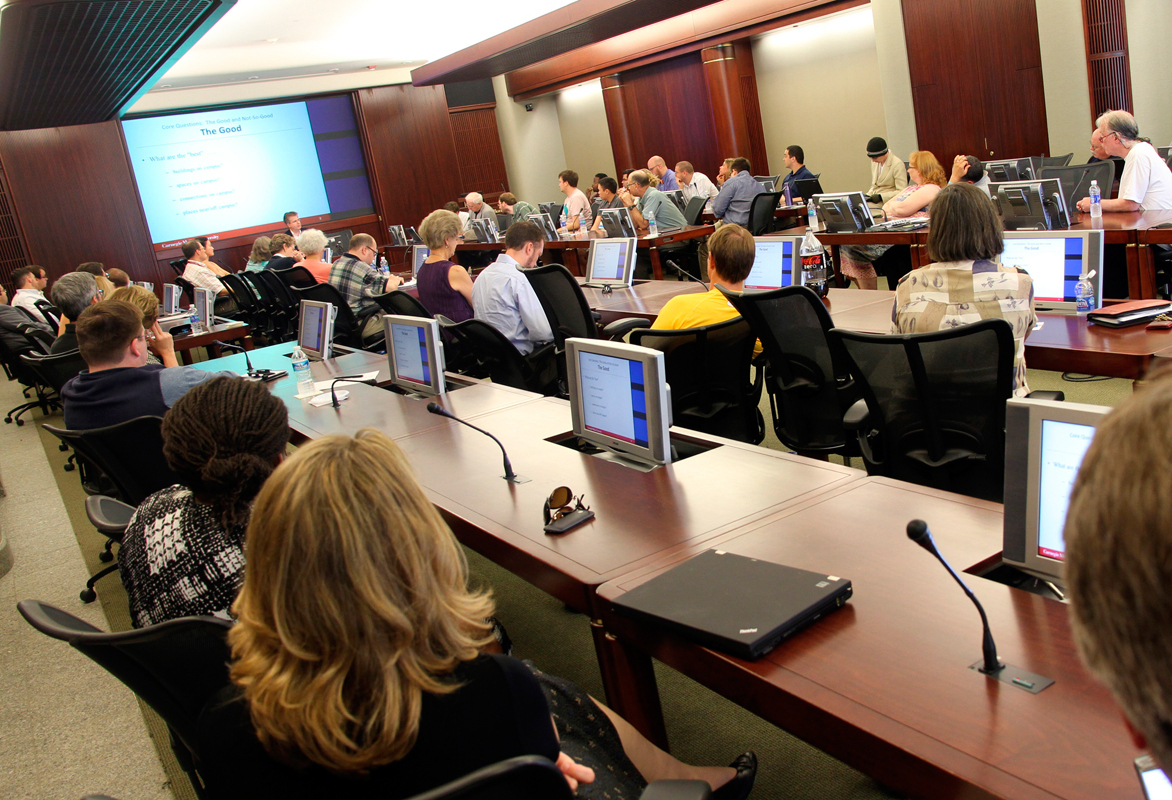 Participants filled the Posner Center to discuss their likes and dislikes about campus buildings and spaces. (credit: Jonathan Carreon/Photo Editor)

Campus Design and Facilities Development staff hosted town hall meetings on June 19 and June 28 to gather feedback on campus buildings and spaces from faculty, staff, and students. The comments will help to guide the implementation of the university's 10-year master plan.

The master plan, which was first made public last March, could lead to new academic buildings and significant alterations to Forbes Avenue. The plan needs to be reviewed by both the Pittsburgh city planning commission and city council.

Held in the same format as the first town hall meeting on June 19, it was also held in the same location, the Posner Center. With about 60 staff and faculty members, this second meeting had nearly double the attendance of the first.

Michael Murphy, vice president for campus affairs, led a discussion on the pros and cons of the university's spaces.

Attendees paid particular attention to the placement and upkeep of campus walkways, the availability of comfortable seating inside and outside of buildings, and the navigational difficulties campus newcomers seem to endure.

"I understand the hesitation with the look of signage, and certainly I understand you can't have printed directions from everywhere to everywhere," said civil and environmental engineering master's student Kyle Shatzer. "But after having lived for extended periods on four continents, I have to say that Pittsburgh remains one of the most logistically frustrating cities I have ever been in. And should there be a direction you want to tip in that balance, I would certainly lean in favor of signs."

Murphy noted that the extensive additions to the plan were meant to create an idealized blueprint rather than suggest concrete changes. He detailed the list of nine design principles used to create and implement the plan: open space, edges and entrances, multi-modality, sustainability, architecture, mixed use, universal design, public art, and neighborhood compatibility.

Murphy added that it would be unusual if more than half of the ideas in the master plan were implemented.