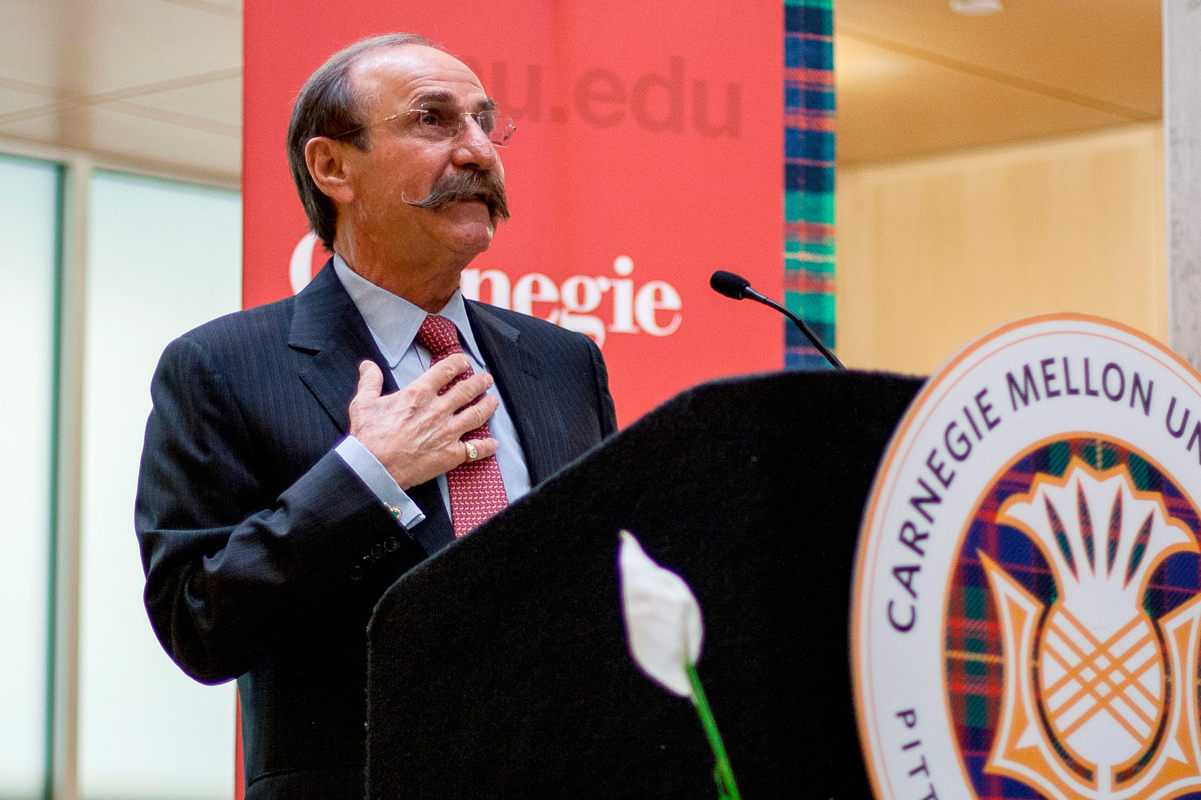 Mehrabian, who served as university president from 1991–97, oversaw the creation of the CIC.

Friends, colleagues, and students of Mehrabian spoke at the dedication ceremony, which was held in the CIC and attended by approximately 100 members of the campus and Pittsburgh communities. The speakers included current University President Jared Cohon; Board of Trustees member Tom McConomy; former Vice Provost for Education Indira Nair; alumna Rebecca Allbrecht Allison, who attended Carnegie Mellon during Mehrabian’s tenure; and President of the Regional Industrial Development Corporation of Southwestern Pennsylvania (RIDC) Donald Smith. Mehrabian himself also spoke.

“When I came here, I felt that Carnegie Mellon was on a great trajectory, and I saw my job as trying to keep it on the trajectory that Robert had laid out,” Cohon said.

Cohon pointed to Mehrabian’s emphasis on undergraduate education as one of the best aspects of his presidency: “I’ve had the experience — and I’m sure Robert did too, when he was president — of going to see alumni from the ’70s and the ’80s, and they would not hesitate to say to me, in very public settings, ‘I hated Carnegie Mellon. I got a great education, but I hated Carnegie Mellon.’ You don’t hear that, I haven’t heard it yet, from someone who graduated in the ’90s.”

Many of the speakers emphasized Mehrabian’s role in facilitating tech start-ups and bringing industry to the region.

Nair said that the CIC, which provides laboratory and office spaces to companies that want to collaborate with Carnegie Mellon on innovative projects, was the perfect building to name after Mehrabian. “This was what he was about,” Nair said. “He was as much about education as about this relationship with Pittsburgh, and bringing industry to Pittsburgh.... That industry coming back to Pittsburgh in a different way — not the steel, which is high machine industry, but the high people industry — was Robert. So this is the right place to dedicate to him.”
Apple, Disney, and Intel all occupy space in the CIC.

Sophomore computer science and statistics double major Kevin Gilbert attended the dedication as part of his role on the President’s Student Advisory Council. “I really wanted to come out to this event because it was under Dr. Mehrabian’s administration that the seeds for the School of Computer Science were born,” Gilbert said. “The School of Computer Science is unique across the entire country. It’s the only one of its kind where computer science is treated as a school and not just as a field. So I was really excited and honored to come to this, to meet the president who was able to accomplish all that.”

In his address, Mehrabian thanked many of the people in attendance who helped him or worked with him during his time as president. He emphasized the contributions that other members of the university and local communities had in bringing industry to the region. “Pittsburgh is a vital, creative environment, and Carnegie Mellon and the University of Pittsburgh played a great role, but it’s the leadership of Pittsburgh that’s played a great role,” Mehrabian said. “It’s a great place for everybody here.... When it comes to Pittsburgh, we always put our differences aside.”