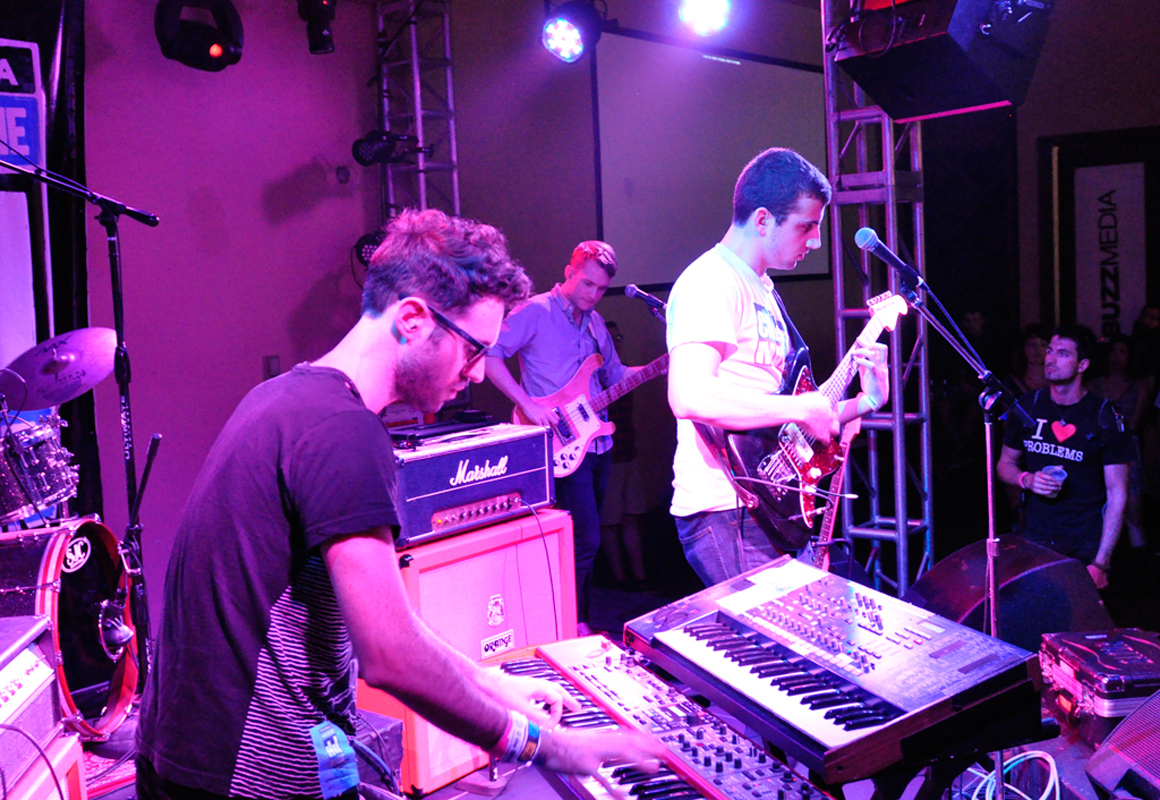 Cymbals Eat Guitars performed at South By Southwest in Austin, Tx. two weeks before continuing their tour to Pittsburgh. (credit: Courtesy of Jason Persse via Flickr)

Given the chill and nostalgic music that has been trending recently, it is not uncommon to go to a concert in which a majority of the crowd simply stands and watches a band play. Listeners check their phones and talk to their friends. They have the exact same experience they would have listening to an album in their car. This is not, however, the experience of a Cursive concert. Last Wednesday, Cursive performed at Mr. Small’s Theatre with Cymbals Eat Guitars and Conduits and provided an energetic musical experience that kept fans engaged throughout the show.

Conduits, an indie rock sextet based out of Omaha, Neb., was the first opening band. Despite releasing their debut album on March 20, they performed a cohesive set that mixed the straightforward arrangements of pop rock with the sonic textures of shoegaze and psychedelic rock. The crowd was small for Conduits’ set, but it was clear that the pulsating bass lines and beautiful guitar ­— imagine rippling water as a sound instead of a vision — captivated these dedicated fans completely.

By the time Cymbals Eat Guitars, a Staten Island-based quartet, took the stage, the audience had grown considerably. The band delivered a visceral performance of material mainly off their album Lenses Alien. The highlight of their set was their performance of “...And the Hazy Sea” off their debut album, which featured spastic lighting and an improvised solo by lead singer and guitarist Joe D’Agostino. The feel of their set contrasted sharply from their recorded material. While their records are cleanly produced, their live performance sounded much more like a wall of sound, which highlighted their shoegaze influences.

Before Cursive even began its set, audience members began chanting the name of lead singer and guitarist Tim Kasher. When the band took the stage, however, the members did not seem to take notice of the packed room and immediately began their set. While the audience had been receptive to Conduits and Cymbals Eat Guitars, it was absolutely enraptured with Cursive. Fans screamed and sang along to the fifteen-song set and four-song encore that Cursive provided, while several fans moshed spontaneously throughout the night.

While the opening bands both sounded very modern, Cursive’s sound straddled the angsty pop-punk characteristic of the early 2000s and the more recent indie trends. Their songs would drop suddenly from a hard-hitting melody to Kasher singing softly into the mic with lyrical dexterity. About half an hour into the set, Kasher addressed the crowd as if they were old friends and indulged some drunken fans in an argument about whether Millvale or Pittsburgh was better.

While a majority of the audience had come for Cursive, it was difficult not to leave as a fan of all three groups. Between the unique and captivating performances and the band members themselves manning the merchandise table, concert goers were treated to a night of musical participation instead of passive co-existence.