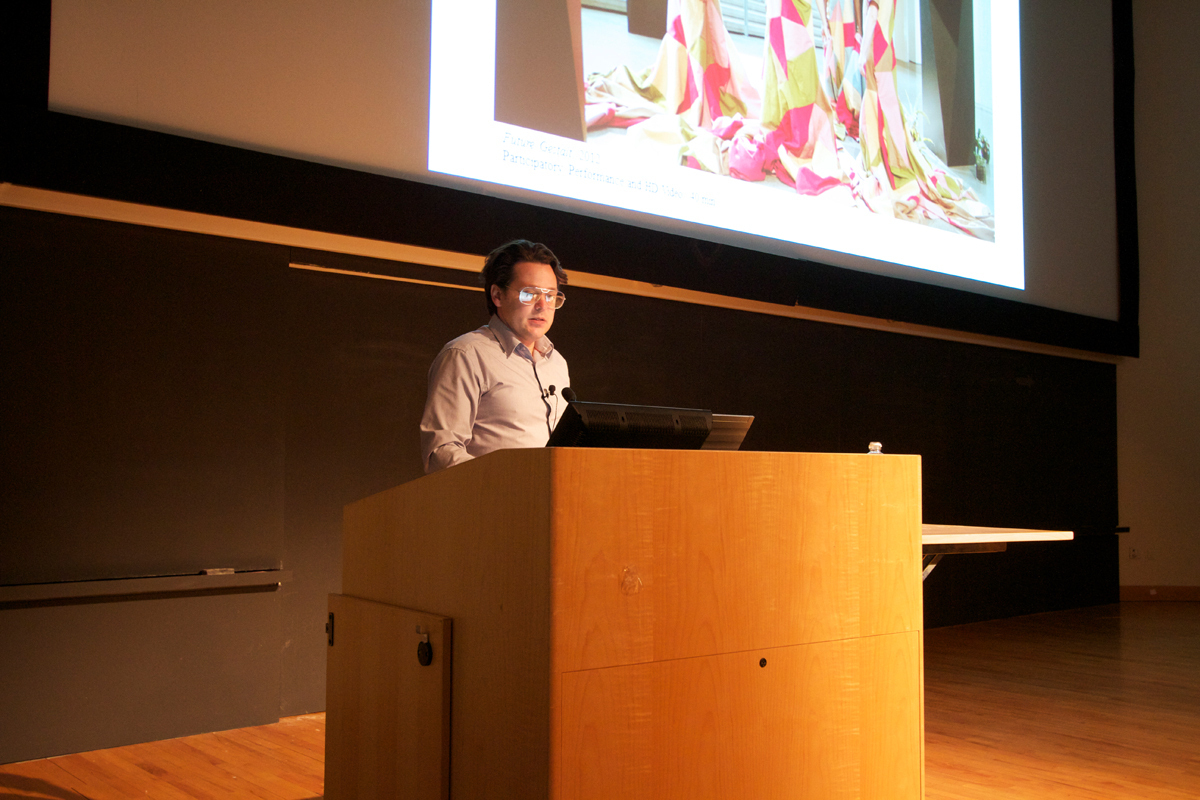 “They love artists at the IRS,” joked performance artist Brody Condon during his lecture in McConomy Auditorium last Tuesday. The lecture was part of the College of Fine Arts lecture series. Condon has been fully engaged in his art since he graduated with a Masters of Fine Arts in visual arts from of the University of California at San Diego in 2002, but still has no answers for the IRS when it comes to how long his “company” has been running.

After receiving a classical education in sculpture, Condon stepped into performance art and installation. In his 1998 sculptural performance art piece titled “Room,” Condon addressed his post-traumatic stress. In the piece, Condon set up a bare wooden frame of a room in a dried-up lake bed outside of Los Angeles. He then suspended himself for hours within the frame, held up only by pig intestines. His only audience for this piece was the all-terrain vehicles that would infrequently pass by the installation.

Condon now draws audiences everywhere he goes, from the New York Museum of Modern Art to the Los Angeles County Museum of Art to an expansive park in the Netherlands.

Condon often works with live action role-playing (LARP) in his performance arts. At the Dutch Sonsbeek Sculpture Exhibition in 2008, Condon directed a complex LARP performance, titled “Twentyfivefold Manifestation.” During the piece, the players created entirely new personas and cultures. They fabricated new gods around the sculptures of other artists, and even spent days on end in a sculptural tower of worship.

Condon asserted that he still wanted to hold on to the subculture of LARP and let the performers add their own detail to the scenario. “They bring their own material and their own interest. I only worry about their subjective experience if it gets dangerous or they break character,” Condon said.

In another performance art piece called “LevelFive,” Condon focused on the authenticity of the participant’s experience. The piece, which was installed multiple times throughout 2010 and 2011, is a reference to the self-realization seminars that became popular in the 1970s. The two-day experiment pushed volunteers to extremes in an attempt to recognize their true faculties. Condon said it was “kind of like creating a sort of experiential essay.”

Condon would at times debrief with his players, in order to “roll through what looks like a very extreme experience.” Additionally, he established tools that enabled the participants to check in with one another emotionally without breaking character. “For me personally, that’s the audience — that’s the point,” Condon said.

Third-year graduate student in the fine arts Agnes Bolt identified the contrast among performance, role-playing, and technology in Condon’s work. “[The] work speaks for itself... about the space of messiness in our mind,” Bolt said.