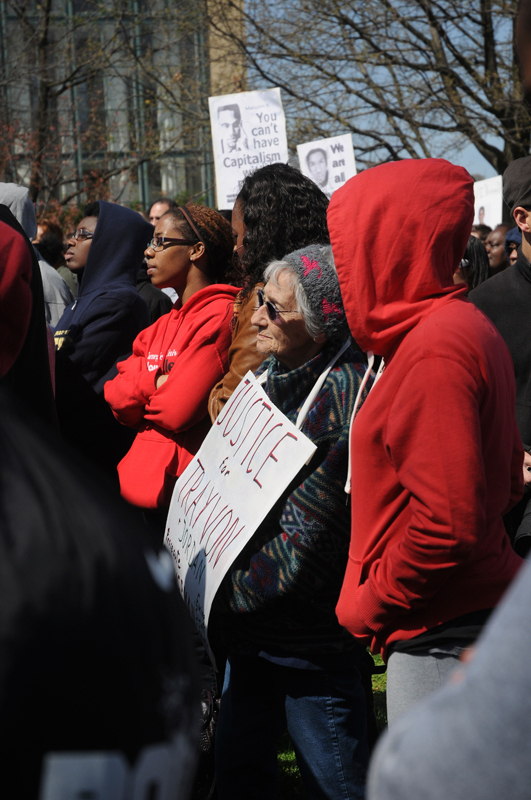 Several hundred people gathered around the Fence at a rally on Monday to demand justice for Trayvon Martin. The rally was organized by Carnegie Mellon’s Black Graduate Student Organization (BGSO).

Martin, a 17-year-old African-American boy, was shot and killed last month in Florida. The admitted shooter, George Zimmerman, says that he was acting in self-defense. Under Florida’s stand-your-ground law, any level of force is justified if a person believes that his or her life is threatened. Unless it is proven that Zimmerman was not acting in self-defense, he cannot be arrested or charged.

Critics say that Florida authorities have not conducted an adequate investigation to determine whether Zimmerman acted in self-defense, and that Martin was racially profiled. Phone records show that Zimmerman, a member of his neighborhood watch, followed Martin against the express instructions of a 911 operator.

Protesters at the Fence wore hoodies — the clothing that Martin wore the day he was shot, which allegedly made Zimmerman suspicious of him — and passed out Skittles and iced tea, the items Martin had just bought from a convenience store when he died. Many carried signs that said, “I am Trayvon Martin.”

Four Carnegie Mellon students, two University of Pittsburgh students, and a local artist spoke at the rally. Vice president of the BGSO Brittany Claud, a masters’ student in Tepper School of Business and the Heinz School of Public Policy and Management, introduced the speakers and kicked off the rally.

Kimberly Ellis, a local artist who goes by the name of Doctor Goddess, stressed the same point. Ellis tied it into the story of Jordan Miles, a local African-American teenager who was beaten and stunned by three Pittsburgh policemen while walking, unarmed, through Homewood in 2010. “Laws can be changed. But you have to show up at the voting booth. And you cannot just react.... So those of you who were in high school when [Miles was beaten], you’re probably now old enough to vote. And if you’re not registered, shame on you. It’s not just about the vote. What happens is we look to President Barack Obama. We look to the feds and say, ‘Please do something,’ and you completely overlook the local community where you can actually see an impact. You can feel it. When my city councilwoman wasn’t doing what I wanted her to do, I put her out!”

Voter registration forms were available at tables beside the rally.

“I’ve been in Maryland for the last five years, but I’m moving back to Pittsburgh, so I need to register,” said James Cole, a Morgan State University student who registered at the rally. “I felt I needed to do this. I felt like they were talking to me, even though I just got back in town. It was a very informative protest.”

“I know in the black community, we feel like our vote don’t count,” said rally-goer Brandy Mangham. “Because we see all these laws that are so against us. It’s basically institutionalized racism.... I feel like I’m more empowered now. I can go back, I can share the information that I heard from the speakers that presented today, and I can tell people that we can make a difference. We cannot allow things like this to keep on happening when it is ultimately our ability to vote that can prevent it.”

Other speakers emphasized the importance of combating racism on a daily basis.

“ ‘Is this man a monster?’ is the question I ask,” said the second speaker, sophomore information systems major Christopher Lindsay. “No. Racist? Potentially, yeah. But no more than me or any one of us. I’m just as wrong when I joke about my Hispanic brothers being illegal or assume my Asian brothers know karate. I’m just as wrong when I assume a white officer is only following me or pulling up beside me because I’m black. In this way, I’m no better than George Zimmerman. Martin Luther King Jr. once said, ‘Injustice anywhere is a threat to justice everywhere.’ If we desire to demand justice for Trayvon, we all must exercise justice on a personal level.”

“In order to break the cycle of carnage, we must change our culture,” Burgess said. “First, we must remember, as Chris said, we are George Zimmerman too. Fundamentally, Trayvon’s death wasn’t about unjust laws or poor policing. It was about fear. Like George Zimmerman, we too often fear those who do not look, talk, act, or speak the way we do. We may not be killing innocent men in cold blood, but every day, we take small actions that perpetuate the culture that led to Trayvon’s death.... Together, let us honor Trayvon’s legacy by creating a world where he could have lived.”