wats:ON? focuses on idea of transformers 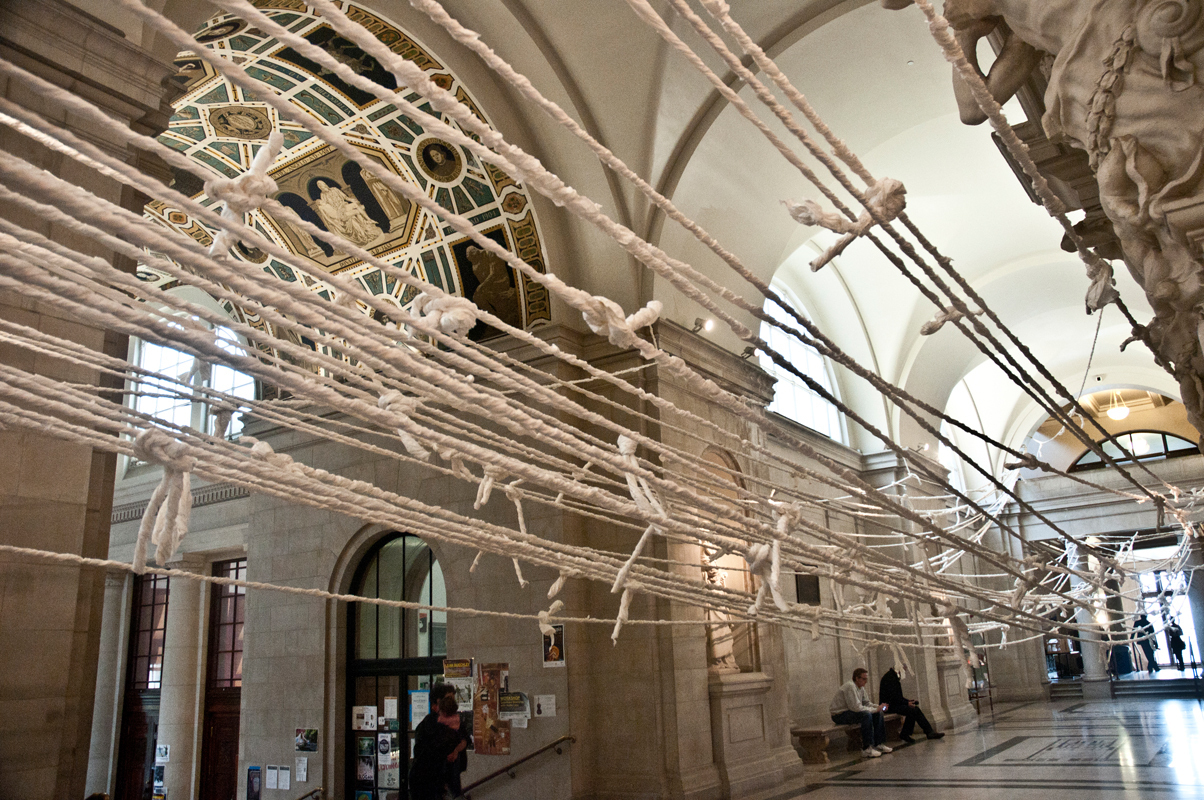 Wade Kavanaugh and Stephen Nguyen were originally intimidated by the venue for their installation “Tug O’ War.” “[The Great Hall] was beautiful and we didn’t want to screw it up,” Kavanaugh said. “We were really scared by it.” (credit: Allison Cosby/Pillbox Editor)

Students wandering into the College of Fine Arts (CFA)building last week may have noticed a lot of paper rope hanging across the Great Hall. The installation, by artists Wade Kavanaugh and Stephen Nguyen, was a major feature of this year’s Jill Watson Festival Across the Arts.

The School of Architecture hosted the annual festival this past weekend. The festival, more commonly known as wats:ON?, featured guest speakers, demonstrations, workshops, and installations centered around the theme of “transformer.”

The festival is an annual tribute to Jill Watson — a Carnegie Mellon alumna, adjunct faculty member, and local architect — who died in a plane crash in 1996. This marked the 15th year of the festival, which celebrates Watson’s “commitment to an interdisciplinary philosophy,” according to the festival’s website.

The wats:ON? theme this year was meant to build off this interdisciplinary idea and inspire questions about the transformation of architecture, art, and technology from materials to finished projects. All of the presenters demonstrated a transformative feature, whether it was transforming their bodies into instruments, rolled-up paper into sculpture, or an Arduino — an open-source single-board microcontroller — into a sewable patch.

According to Garcia, the co-curators asked themselves, “Who can we bring in who will amaze people and surprise them?” while planning the festival. The result led them to the theme of transformer. “The transformer theme has a lot to do with exactly that, but people who do it with almost the minimum amount,” Garcia said. “These aren’t people who are making complex things out of complex things with stuff that’s over people’s head.”

The festival opened on Thursday with a presentation by Leah Buechley, an associate professor at the Massachusetts Institute of Technology (MIT) Media Lab and director of the High-Low Tech research group. Buechley’s talk, titled “Expressive Electronics: Sketching, Sewing, and Sharing,” was cosponsored by the Human-Computer Interaction Institute’s Z-Axis seminar series and focused on the “diversification of electronics,” in Buechley’s own words.

Buechley and her team of graduate students at MIT focus on “helping diverse people create diverse technology using diverse methods through diverse processes.” She presented an example of their work: a rearranged Arduino into a sewable patch, called the LilyPad Arduino, which has expanded the audience for technology by altering traditional gender patterns in technology and computation.

Buechley, like the rest of the presenters and participants, was chosen because of her focus on the transformation of some aspect of her work. For Buechley it was technology and computation. For percussionist and rhythm dancer Keith Terry, it was his body.

Terry performed to a full audience in the Alumni Concert Hall on Friday. In a performance centered on sound and movement, he transformed his body into a multi-faceted instrument. “Terry’s a performer who essentially has nothing — just his body — and he can make an amazing array of sounds and beats and rhythms,” Garcia said. His performance on Friday was highly interactive; he taught audience members the basics of numerous types of body music and dance, including hambone and kecak.

Terry closed his presentation by discussing visual rhythms and the rhythmic qualities of architecture. After assigning pitches and sounds to various aspects of the room — including columns, wall features, and a row of timpanis — he joked, “We could spend the rest of the festival playing this room.”

The architecture of the College of Fine Arts building was also a recurring theme in the festival. While Terry found music in the architecture, Kavanaugh and Nguyen faced limitations created by the building while they were planning their installation.

Kavanaugh and Nguyen gave a casual lecture on Saturday night as a closing to the festival, discussing their previous work and their most recent project, titled “Tug O’ War,” which they had installed in CFA over the previous few days.

Their installation included nearly four miles of paper rope and showed how creative ideas could transform a challenging space into something amazing using common materials.

Kavanaugh and Nguyen have worked together on numerous collaborative projects in the past, usually involving paper, an economical and available material. They focus on movement and the viewer’s experience in their work. “We try to keep an element of play in everything we make,” Kavanaugh said.

“One of the goals for the wats:ON? festival is to be wondrous, to amaze, to inspire,” Garcia said. “And I think that’s one way that you can connect the five schools in the College of Fine Arts, which the festival serves. It’s hard to connect music to drama to architecture to art to design, but one of the things that they do is they are this creative endeavor that is usually amazing and really inspiring and wonderful.”