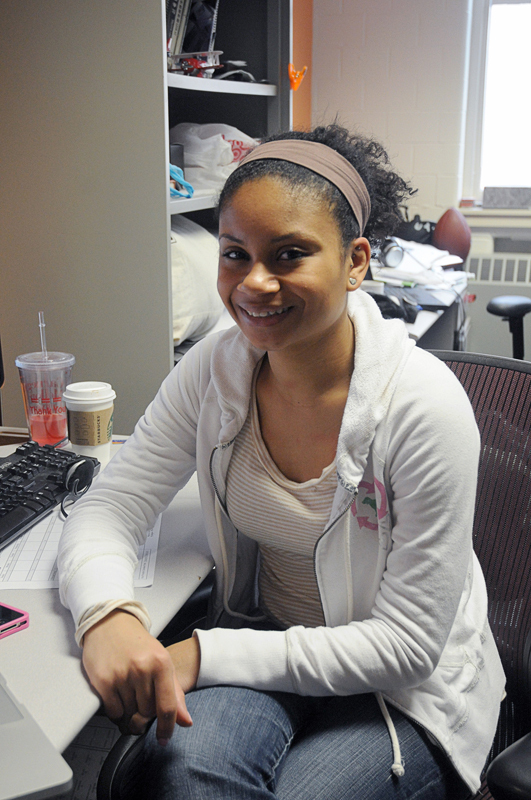 Portia Taylor, a Ph.D. student in the department of biomedical engineering, has worked to develop an “exercise coach” that gives physical therapy patients with osteoarthritis feedback and suggestions on their performance. (credit: Jennifer Coloma/Staff)

Using a program with a personalized user interface that tracks movement wirelessly and gives a score with feedback may soon become a reality for physical therapy patients. This isn’t the newest Wii game, however. Instead, it’s the work of researchers from Carnegie Mellon and the University of Pittsburgh helping patients with knee osteoarthritis.

Osteoarthritis (OA) is a disease that affects millions of people, especially among older generations. According to the Centers for Disease Control and Prevention, nearly one in two people will develop some form of OA in their lifetimes.

Portia Taylor, a Ph.D. student in the department of biomedical engineering, is leading the research for a digital “exercise coach” designed to help patients with OA maximize their physical therapy exercises and avoid injury. She presented her research at the 2012 International Consumer Electronics Show.

According to Taylor, there is a definite need for the “exercise coach.”

“A majority of patients are just sent home with paper instructions and pictures, and they self-report back to the therapist,” she said. This can lead to patients performing exercises wrong and physical therapists questioning the validity of their patients’ reports.

To use the digital “exercise coach,” the patient straps on a soft, brace-like pad to their knee and completes his or her exercises as normal. The sensors in the padding have accelerometers and gyroscopes that track the patient’s movement. The sensors then wirelessly connect to the computer and give feedback to the patient regarding how accurately the exercises were performed.

To give accurate feedback, the computer refers to stored information on how to correctly perform an exercise and how to fix incorrect procedures. The computer gives specific instructions to the patients immediately after they complete the exercise.

“It will say something like, you need to keep your torso forward; you’re at a 45-degree angle, you need to be at 60,” Taylor said.

To make it all work, Taylor needed the help of a University of Pittsburgh Ph.D. student in physical therapy, Gustavo Almeida, who watched video after video of people doing exercises and documented the mistakes they were making.

“From that, we get this big set of errors that we’re looking for, and the idea is to train the system to detect those errors,” Taylor said. Almeida then helped Taylor implement suggestions that the “exercise coach” would make to help the patient improve.

Although Taylor and Almeida were able to program the system with solutions to common exercise mistakes, it was impossible to record every way a patient could perform the exercise incorrectly. To solve this problem, Taylor implemented machine learning. With this programming, the machine is able to learn the different ways to solve an incorrect exercise as it is in use.

“If a new error comes in that is slightly different than all the rest it’s seen ... it knows how to correct it,” Taylor said. “The system says, ‘OK, I’ll correct this and make note of the what the error was,’ so this becomes error number 156 or whatever.”

In addition to giving feedback, the computer has a database that stores all of the information from the patient’s exercises. Physical therapists can access this information at any time, allowing them to keep track of their patients even after they’ve left the hospital. The program can also monitor declines in exercise performance and send notifications to physical therapists.

There is currently nothing like the digital “exercise coach” available in America. Although there are recreational games that use similar sensors, Taylor said that there is no such system that aids in physical therapy exercises.

“I can play my Xbox Kinect and then stop after three weeks, and presumably nothing would happen to me. But [my motion] doesn’t depend on it,” Taylor said. Furthermore, the “exercise coach” is aimed to be more precise in movement tracking and feedback than typical games.

The product isn’t available for use yet, as it is still in the testing phases. However, Taylor has plans to create a start-up that would serve to aid testing and get the product into the marketplace. She hopes to have the product available within five years. To many patients, the product may be a big help in their exercises.

For Taylor, the research also has a personal element.