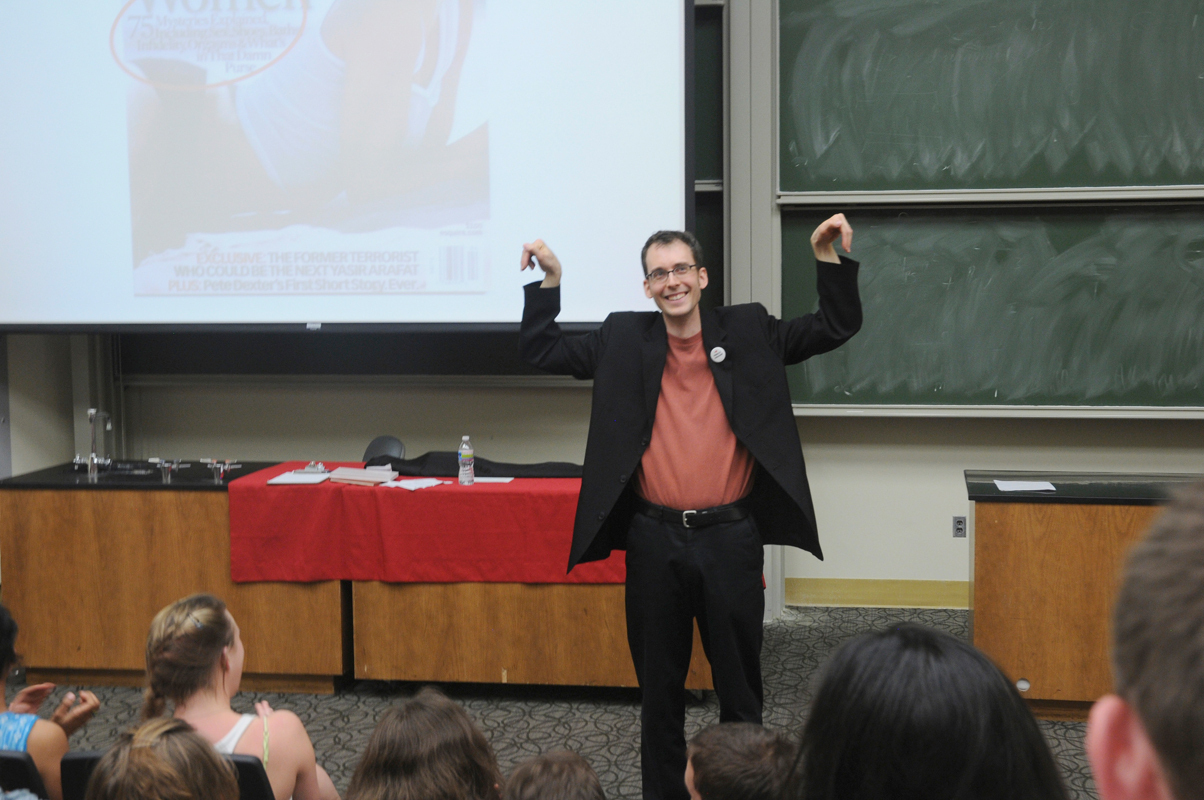 “I <3 FEMALE ORGASM” was prominently displayed on several students’ T-shirts last week. These T-shirts were not solely intended to be provocative or racy, but were also a walking advertisement for the much anticipated “I <3 Female Orgasm” program. Presented by Ms. CMU — a newly formed student organization focused on women’s rights — and the Peer Health Advocates, the presentation featured sex educators Rachel Dart and Marshall Miller, who talked about every Carnegie Mellon student’s primary concern: the female orgasm.

The lecture in Doherty Hall was completely packed last Thursday, with students sitting in the aisles and on the floor in front of the first row. The speakers started off the program by showing the famous “I’ll have what she’s having” scene from When Harry Met Sally. Students were roaring with laughter, which was exactly Dart and Miller’s intention, as they said the topic of female orgasm should be something fun to talk about — not something serious or awkward.

The presentation was interactive: The speakers invited audience members to share what they already knew about the female orgasm. Dart and Miller would then address each piece of knowledge by either clarifying it as a myth or expanding upon it. This flexibility gave the presentation a natural flow that was more comfortable than if the speakers lectured straight to the audience. Miller was particularly hilarious, comparing poor sex education in high schools to a driver’s education class that only teaches you how to put on your seat belt and not actually how to drive the car.

Mainly females attended the presentation, but there was a good number of males present. One of the male attendees, Nick Zuniga, a sophomore biology and psychology double major, said that he attended because he “just wanted to find out more about how the female body works ... how to better help my girlfriend.”

The publicity for the event made sure to stress that this was a program for all genders and sexual orientations. The speakers did a good job of addressing the topic from multiple perspectives; the program never seemed like it was focused solely on heterosexual relationships and intercourse. Dart and Miller also addressed more serious concerns such as sexual abuse, providing resources available to students who may be affected by such issues.

The entire audience then reconvened in the original lecture hall, where the speakers finished their presentation by further discussing the female body and answering questions along the way. At one point, audience member Anya Weitzman, a senior Bachelor of Humanities and Arts student in art and anthropology, offered to clarify the answer to a question a male student asked regarding the clitoris, citing her Body Politics class as the source of her knowledge.

The audience was enthusiastic about the presentation and discussion. At the end of the program, students rose and gave the speakers a standing ovation for an entertaining and informative session.