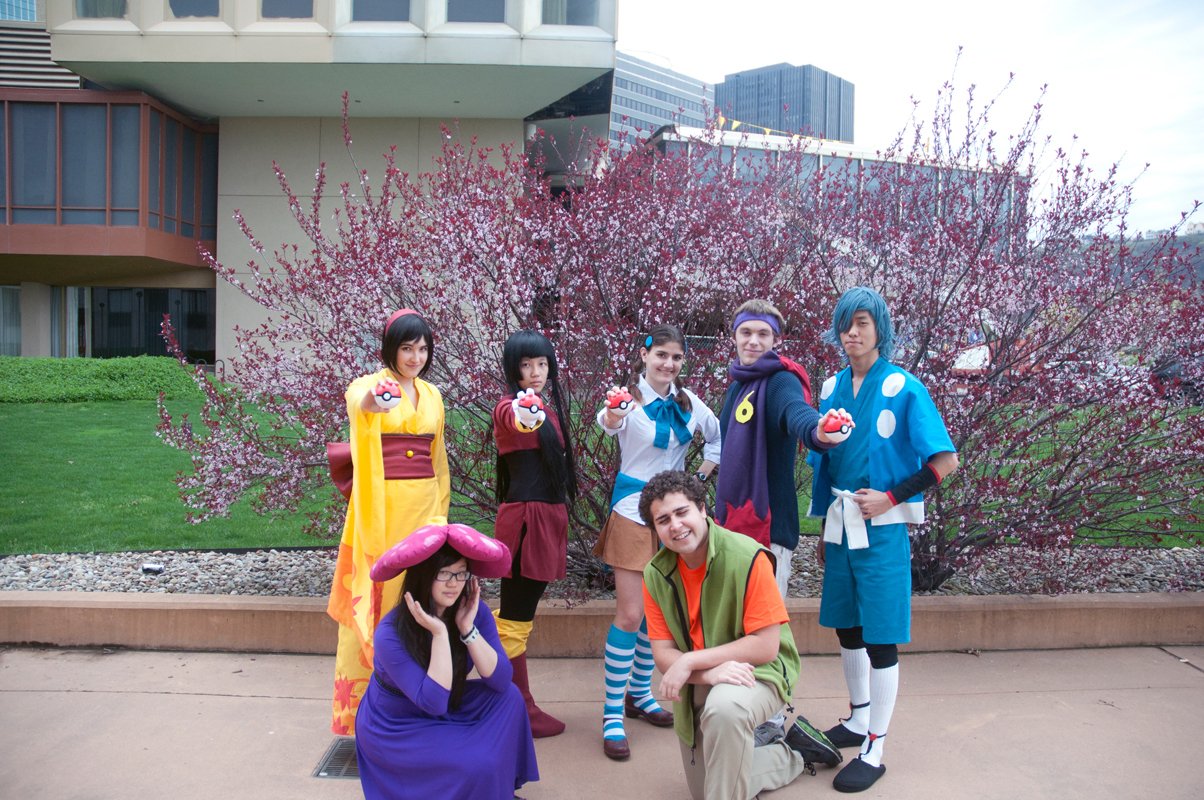 A group of Carnegie Mellon students in the Cosplay Club dressed up as Pokémon characters for Tekkoshocon last week. (credit: Justin McGown/)

Over 3,000 people converged at the Wyndham Grand hotel in downtown Pittsburgh when it hosted Tekkoshocon X, a Japanese culture convention, last Wednesday to Sunday. Many participants, known as cosplayers, came in hand-crafted costumes as anti-zombie commandos, school girls, wizards, aliens, knights, monsters, and more. Those not sporting guises wore shirts that declared their allegiance to superhero teams or their affection for certain video game characters.

This is the 10th Tekkoshocon — a portmanteau of convention and the Japanese word for steel mill. The first convention was the brainchild of a University of Pittsburgh student, who organized the convention in 2002. The event is run wholly by volunteers — from the administrators to those holding up signs indicating where the snaking lines of people clamoring for spots in screenings and panels begin.

One of those volunteers, Barry Marchetto, a junior biology major at Allegheny College of Meadville, has been coming to Tekkoshocon since its inaugural year. “So I figured, why not work here?” Marchetto said. “It gives me something to do in the downtime between panels.”

Having a panel only requires a willingness to do paperwork, leading to a highly diverse set of topics. Some explained the symbolism of the logos of obscure television shows, and others taught the dance moves to the latest pop songs from East Asia. Some of the nerdier aspects of Western culture were also represented, with discussions about the nuances of card games, what it means to be Bronie (an adult fan of My Little Pony), and the webcomic Homestuck.

The convention also featured voice actors who work on the English versions of animes, various musical and comedy acts, and an area for vendors. The vendors were difficult to access, however, since only a limited number of shoppers were allowed at a time. The fourth floor was dedicated to playing card games, a wide selection of video games, and several Dungeons and Dragons campaigns.

Still, cosplayers owned the day. Adventure Time heroes crossed swords with Darth Vader, as the dancing robot of LMFAO music video fame shuffled by the titular character of Inyuasha playing songs from the Persona 4 soundtrack on the lobby piano. The most anticipated events were the Masquerade, a group competition in which cosplayers performed a small talent-show-type skit, and an individual competition where contestants were judged on the quality of their costumes’ construction.

Enthusiasm for the costume aspect of the convention lead to the development of Carnegie Mellon’s own Cosplay Club. Mainly a development of the Vermillion Anime Club, the Cosplay Club was spearheaded by Angelique Rein, a first-year Japanese and linguistics double major. Rein is a veteran cosplayer.

“I started going to conventions as a freshman in high school, and after seeing everybody else, [me and my friends] decided to try it ourselves,” she said. Rein believes that accuracy takes dedication — her costume for Pokémon Gym Leader Erika for Tekkoshocon took over 40 hours of work — but is rewarding in the end. “People take pictures with you, they’re just happy to see you, and all your hard work pays off.”