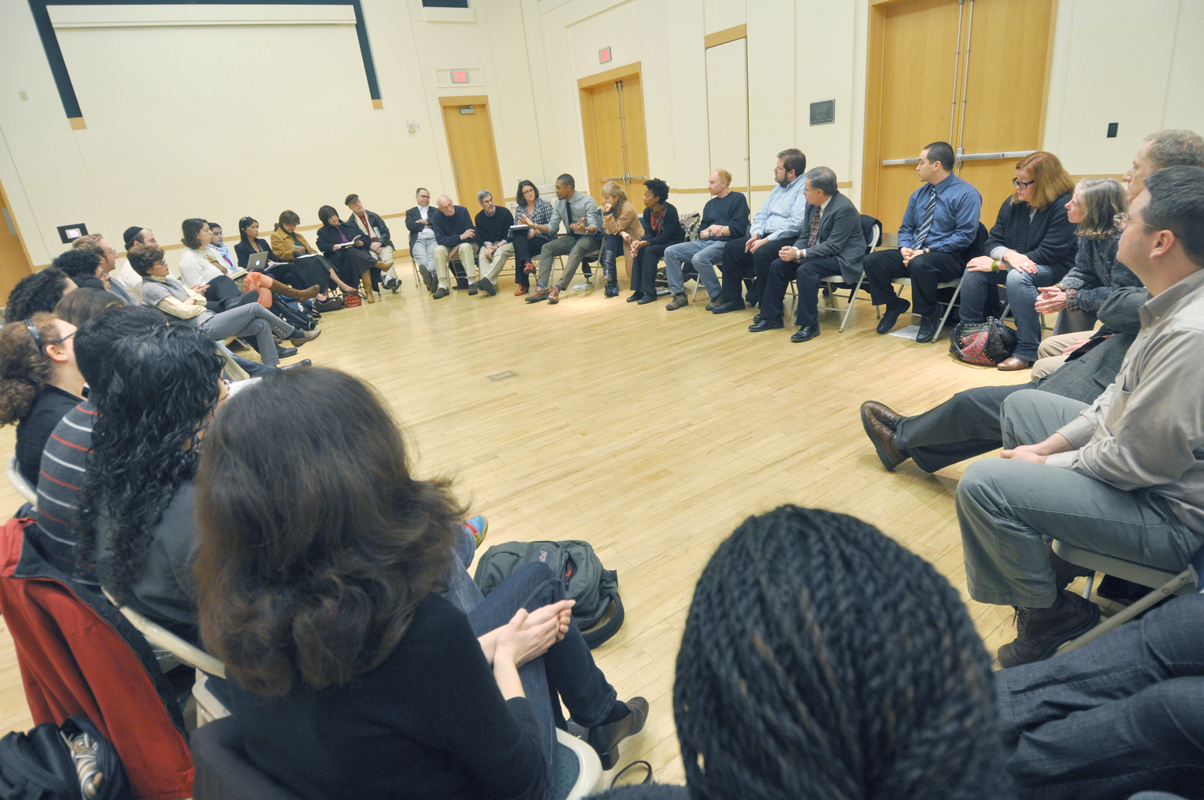 English professor Terrance Hayes stressed the need to pay attention to what the essay actually said, rather than people’s memories of it. (credit: Jonathan Carreon/Photo Editor)

Student Affairs held an open forum last Wednesday to discuss the controversy over one of the winning essays of the annual Martin Luther King Jr. Day writing contest.

The essay, written by Winchester Thurston High School junior Jesse Lieberfeld, is titled “Fighting a Forbidden Battle: How I Stopped Covering Up for a Hidden Wrong.”

The essay tells the story of how Lieberfeld came to believe that Israel is an oppressor in the Israeli-Palestinian conflict, and of how that belief has affected his life. It draws parallels between the struggle of Palestinians and that of black Americans during the civil rights movement.

Since the winners were announced on Jan. 15, many members of the local and national Jewish community have protested the selection of what they claim is an ill-informed and hate-filled essay as a winner of a contest designed to honor the memory of Martin Luther King Jr.

Before the forum began, facilitators stressed that the emphasis of the forum was on dialogue, not debate — although little traditional debate actually occurred. Critics of the essay did not provide much evidence to back up their claims about its tone, nor were they officially encouraged to.

Opponents of the essay argued that it was so filled with hatred against the Jewish people that Carnegie Mellon had a responsibility not to condone it by giving it an award. Eliana Weiner, a sophomore Bachelor of Humanities and Arts student in architecture and psychology and member of the Carnegie Mellon group Tartans for Israel, said that she went into the forum looking less to critique the essay, and more to find out why it was chosen as a winner.

“I was more offended by the institution’s choice of the essay — to elevate it — rather than the kid’s writing it,” Weiner said.

According to English professor Yona Harvey, who has served on the selection committee in prior years, the essays are chosen as winners based on several factors.

“Essentially, we’re looking for people who can tie their topic to the legacy of Dr. King. Craft has also been cited — how well it’s actually written. I guess it can be subjective, just like any submission to a national journal,” Harvey said.

The essay does have many supporters. Dr. Naftali Kaminski, an Israeli professor at the University of Pittsburgh, said that he believes Lieberfeld’s essay was, in many ways, true to King’s spirit.

Kaminski pointed to Lieberfeld’s reference to King’s letter from Birmingham jail, and called the letter a “guiding document for people who want to change reality.”

“When you want to change reality, when you want to fight injustice, you use nonviolent resistance, but it doesn’t mean that you turn the other cheek. It means that you stand, you speak truth to power,” Kaminski said. “And I actually think that Jesse’s essay was reflective of the spirit of the letter from Birmingham.”

Students who attended the forum generally had positive reactions to the event.

“I think it was a very good idea to have this forum in this environment, because I think the discussion was necessary,” Weiner said. “And I think it was successful, but at the same time, I think it veered off from what they wanted a bit, in terms of not trying to attack the writer himself, and using the personal facts about him.”

Some opponents of the essay criticized Lieberfeld himself, calling him disturbed, ill-informed, or pathetic.

“I sort of cringed when people started to analyze Jesse, a little,” Kaminski said. “I don’t know that it’s fair, when the person is not here.”

“I am happy I went to [the event], as it helped me to get a feel for the pulse of the community that I am part of,” said Chloe Lynn Oxley, a junior double-majoring in decision science and professional writing, in an email.

Oxley added that while she was glad the Carnegie Mellon community was able to have an open discussion, that was not enough on its own.
“Let’s not stop at getting our viewpoints off our chests, but instead, let’s consider working towards something greater than ourselves. Respect is crucial and time is of the essence,” Oxley said.

Smith said that if members of the campus community have a problem with the way any aspect of the Martin Luther King Jr. Day festivities are run, there are opportunities for them to do something about it.

“We start planning for MLK the day after MLK happens. If there’s anyone in the room who wants to be involved in that process, to continue to create opportunities for these kinds of meaningful dialogues, or if you have ideas that you’d like to see happen that day — it’s a day for everyone,” Smith said. “If you want to get involved in that process, and you have suggestions, I encourage you to email us, and we’ll present those suggestions for next year.”

Lieberfeld’s essay can be read online at the Pittsburgh Post-Gazette 's website.