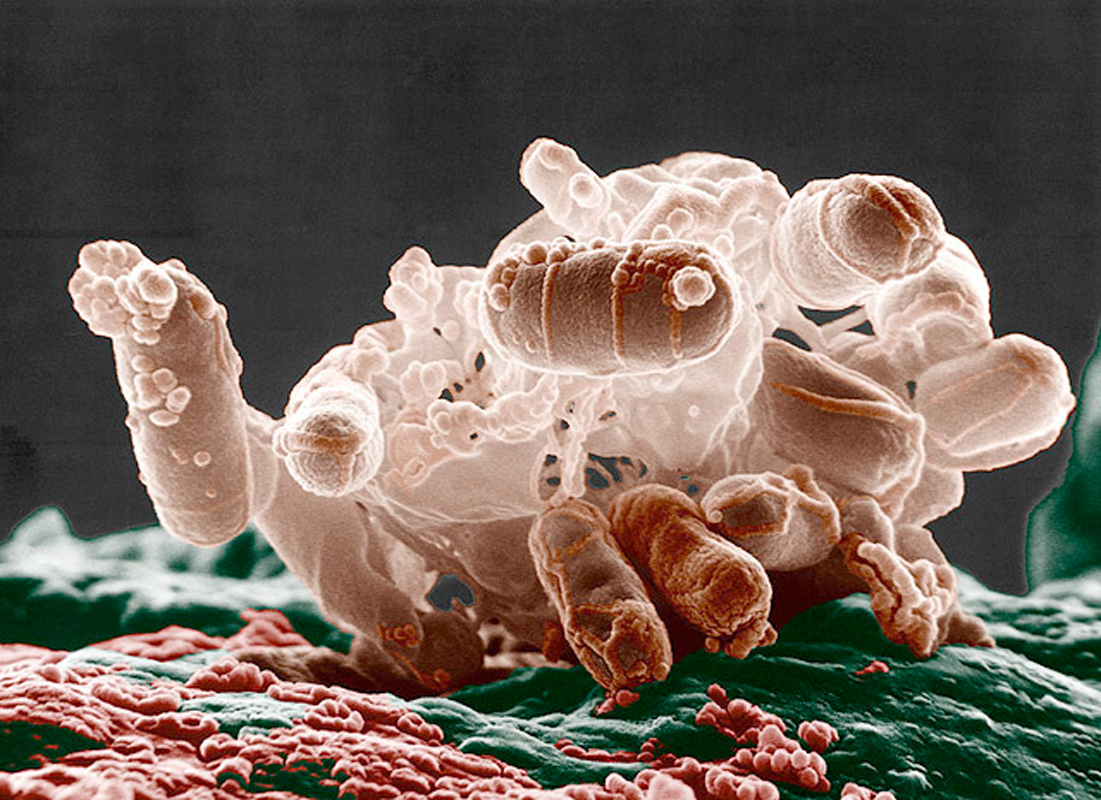 Escherichia coli bacteria and similar organisms cause illness and death, and can be difficult to treat due to the toxins they release. New research by Carnegie Mellon scientists suggests that the metal manganese can provide protection against the toxins, working as a preventative treatment against infection. (credit: Courtesy of Microbe World via flickr )

When multiple children died of an E. coli outbreak that stemmed from a Jack in the Box restaurant in 1993, the bacteria made national headlines. Millions of people around the world continue to die from multiple strains of Escherichia coli and other organisms from the Shiga toxin family of bacteria despite efforts by the federal government to fight the strain, according to an MSNBC article. To aid in this fight against the toxin, researchers at Carnegie Mellon may have found a friend in the element manganese.

Shiga toxin bacteria has been the culprit in millions of deaths, especially in developing nations, according to a Carnegie Mellon press release. Although there are currently antibiotics to fight the bacteria, the treatment forces the dying bacteria to release more toxins. This discharge can prove fatal for some patients.

Searching for a solution, postdoctoral researcher Somshuvra Mukhopadhyay and professor Adam Linstedt, both within the department of biological sciences, discovered the effects of the metal manganese. Their research was recently published in a January issue of the journal Science.

Much of their answer came from searching one of the most basic units of life: cells. The Shiga toxin entering a cell will quietly take over and shut down ribosomes, the cellular machines that create essential proteins for the body.

The researchers observed that the toxin would latch itself onto GB3, a fatty membrane found in some cells. The toxin would then enter the cell, roaming around and interacting with a protein named GPP130, which Linstedt discovered in the mid-’90s. From there it would visit other cellular regions, and eventually the ribosomes. Without ribosomes, the cell is deprived of important proteins; this can create major issues within the body.

Even after looking closely at this model, the researchers were unaware of how the toxin was able to successfully bypass so many parts of the cell. They knew that the GPP130 protein played an important role in the movement of the toxin, but they didn’t know how to stop it.

“The original idea can be traced to a phone call from Don Smith at UC Santa Cruz, a toxicologist working on [manganese],” Linstedt said via email. “He thought he saw an effect of [manganese] on GPP130. We started a collaboration and my lab, especially Somshuvra, verified and then extensively characterized the effect of manganese on GPP130.”

That “effect of manganese” Linstedt spoke of was that the metal can cause a deterioration of GPP130, leaving the Shiga toxin all dressed up with no place to go. In addition to being barred from the cytoplasm, the toxin was displaced to the lysosomes where it could be destroyed. The treated cells were 3,800 times more protected than those without manganese.

The next step was to test the effectiveness of manganese in mice. After formulating a safe dosage, the researchers exposed groups of mice to the Shiga toxin along with the manganese, and another group with just the toxin alone. Within four days, the mice treated with manganese were completely unharmed — in contrast to their stiff counterparts in the control group.

This discovery is promising for health advancements and brings enticing possibilities for future Shiga toxin treatment. Manganese is a relatively inexpensive and abundant metal. If the research gets past human trials, it could be a feasible treatment.

Researchers still need to check if manganese can protect against E. coli. Although it is a clear protector against pure Shiga toxins, there needs to be more research to see how the manganese affects the bacterium that carries the toxin.

Mukhopadhyay, however, is confident. “It is very likely the manganese will also work against the bacteria,” he said. He added cautiously, however, that it is by “no means an absolute certainty.”

In addition to figuring out the effect on bacteria, the researchers want to test the effectiveness of manganese in combination with antibiotics. Linstedt plans to study the manganese after the toxin has already created intestinal damage — their success in mice was only a preventative treatment.

Human trials, while distant, are in sight. “These assays will take a few months to a few years,” Mukhopadhyay said, assuming that all the studies will go as planned.

Eight years after discovering the connection between GPP130 and Shiga toxin, the researchers have finally found an ally in manganese. Although more research must be done, the manganese brings possibilities for the millions suffering from Shiga toxin-induced bacteria.