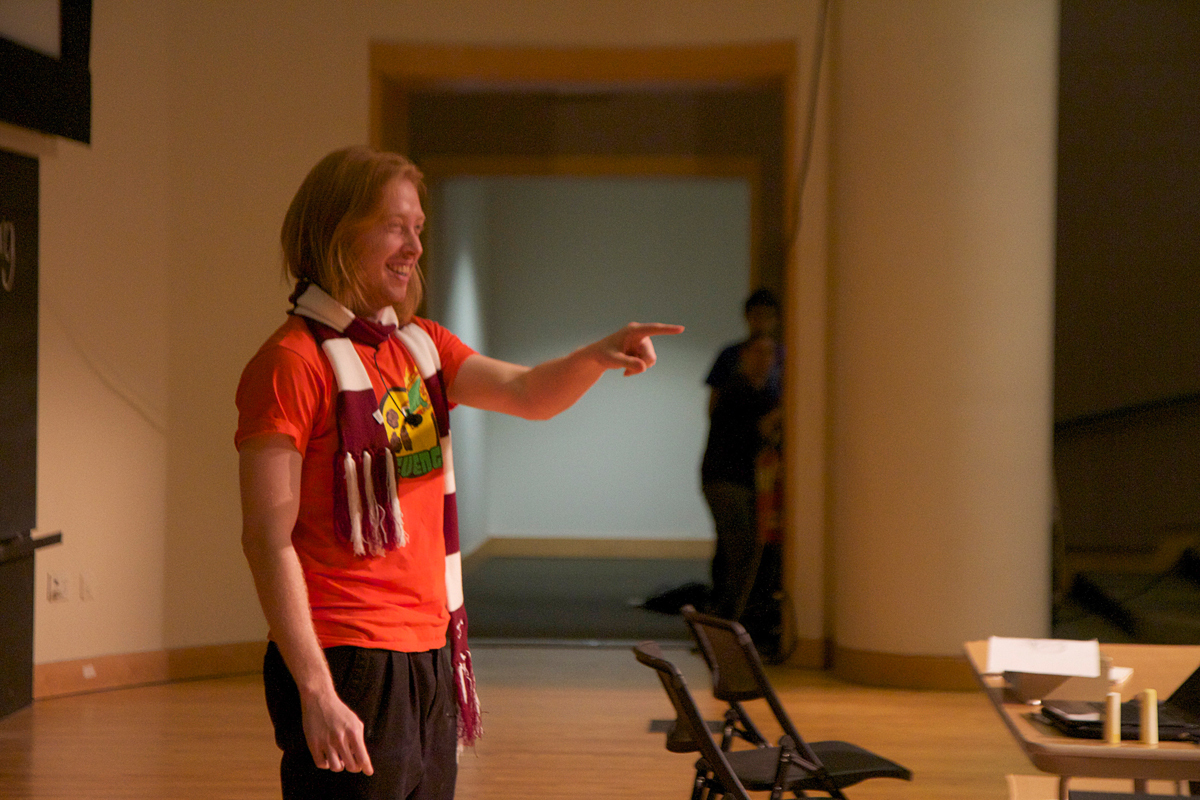 Author and illustrator of the popular daily webcomic Saturday Morning Breakfast Cereal Zach Weiner came to Carnegie Mellon last Thursday to give a lecture in McConomy Auditorium, sponsored by the Activities Board. The content of his lecture, from a preview of his new book to a Q & A session, solidified the reason why his work is so popular on campus.

While McConomy wasn’t packed with attendees, the enthusiasm that accompanied Weiner’s entrance made up for it. Weiner greeted the crowd, adorned in a Carnegie Mellon scarf and socks with sandals.

His lecture consisted mainly of two parts. The first involved him presenting an “Adventure of Your Own Choosing,” plotted out in a Microsoft Word document and projected for everyone to read. It is the current version of a book he hopes to have written, illustrated, and published in a few months.

Without giving too much away, the book involves the reader choosing among various vocations, dealing with interesting people and places named after Czech curse words, and making heinous decisions. When confronted with a future career path, the crowd, of course, chose for the protagonist to be an engineer.

“This is unhygienic, even for the engineering department,” Weiner said, quoting a passage from the book detailing a gruesome fight scene. He knew his audience too well.

“It was different from most lectures,” said Lauren Ruoff, a sophomore in the College of Fine Arts. “While the Q & A was usual, it was cool that he had the book preview.”

Nerdy and humorous references abounded as Weiner presented the rest of the novel, and his comedic nature really exhibited itself. In a community like Carnegie Mellon, often deemed socially awkward even by its own students, such humor thrives because of its geeky perspective.

After the “Adventure of Your Own Choosing” portion, Weiner then proceeded to the Q & A portion of the lecture. While the advance preview of his new book was funny and entertaining, this part of the evening was much more interesting.

Weiner usually focuses his comics on the topics of science, math, love, religion, history, and phallic humor. When asked about the prominence of nihilism in his comics, Weiner responded, “Nihilism is funny. It’s kind of depressing, but it’s fun to put in comics.”

His ability to connect to the audience had less to do with the subject matter of his comics and works, and more to do with his genuine persona. “He was just a very cool guy,” said Karl DeStefano, a sophomore physics major. “He was very nice. Before the show he was doing drawings and talking to people.” In many ways, Weiner could have been a student at Carnegie Mellon. He was very attuned, both in appearance and speech, to the populace of the university.

During the talk, Weiner also described his writing process, often sending ideas to a “joke congress” comprised of his friends and wife before they become comics. When a comic that his wife did not find funny becomes popular and receives a lot of views, Weiner described it as, “Winning the relationship.” He added, “I’m way ahead.”

Weiner really connected with the audience throughout his lecture. While the book preview was humorous, it was his casual talk with the audience that really shone through. It’s how his perspective comes through in person and in his work, in addition to the subject matter and style of his comedy, that made this lecture memorable.