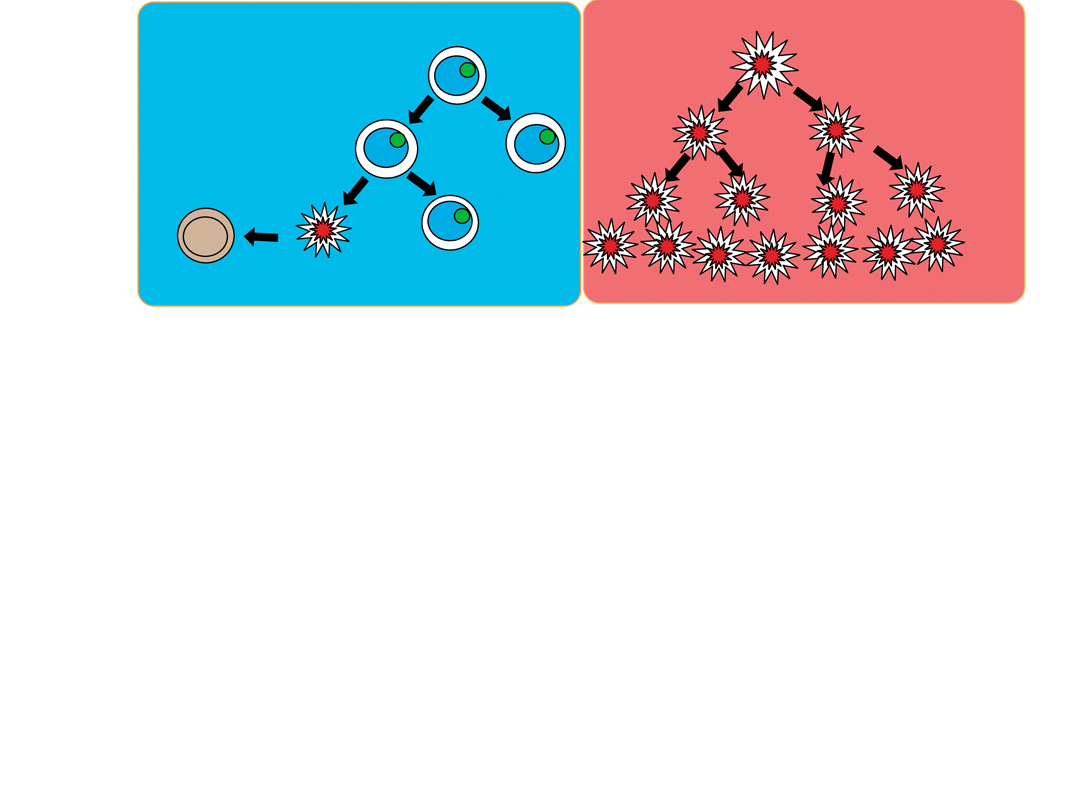 The two images represent healthy (left) and cancerous (right) cell division. In healthy cell division, a healthy cell will terminate a damaged cell through a process called apoptosis, or programmed cell death. A cancerous cell may have a mutation in the gene that regulates apoptosis. Without it, damaged cells will continue to divide and may lead to the growth of a cancerous tumor. (credit: Michael Setzer/Acting SciTech Editor)

Cancer: A brief mention of the ubiquitous killer conjures up unpleasant images of the painful consequences that sometimes result from a diagnosis. According to the American Cancer Society, there were over 500,000 estimated deaths from cancer in the U.S. this year.

While cancer is the result of a myriad of different causes, fast-paced advancements in genetics have allowed physicians and scientists to discover multiple biological receptors critical for tumor growth. Researchers at Carnegie Mellon have explored alternative forms of treatment that inactivate the genes behind these receptors and stop the progression of tumors common in neck and spinal cancer.

Chemistry professors Danith Ly and Bruce Armitage, chemistry post-doctoral researcher Srinivas Rapireddy, and chemistry graduate student Raman Bahal teamed up with multiple researchers at the University of Pittsburgh to look into the prospect of using peptide nucleic acids as an alternative to current treatments that target the growth of a tumor at the molecular level.

The team included specialists in chemistry, oncology, pharmacology, and biostatistics. Their research was published in the journal ACS Chemical Biology.

While the motivation for the use of oligonucleotides stems from infectious diseases, the research team believed they could use the same type of treatment to target certain cancers as well.

Like antibiotics, many cancer drugs can lose their effectiveness within weeks due to resistance. But because oligonucleotides are made up of a combination of the same four base pairs that make up DNA, scientists can tailor them to fight any mutated gene or strain. “With oligonucleotides, the advantage in usage is that you can change the sequence to match anything that can emerge,” Ly explained. “[It’s] similar to using different bullets depending on what the targets are.”

Oligonucleotides are rarely used in clinical treatment, however, due to their sensitivity to degradation and poor cellular uptake. In other words, the flimsiness of oligonucleotides makes it difficult for them to even get to the cell intact. And even if it arrives, it is a challenge for it to latch onto the cancerous cell due to its size and permeability.

In an attempt to make a stronger and better oligonucleotide, the team focused their attention on guanidine-based peptide nucleic acids (GPNAs). PNAs are analogous to DNA and RNA, but are much more stable; the added base pair guanidine — the G — is necessary for cellular uptake. The researchers surmised that the combination of these attributes would overcome the issues currently hindering oligonucleotides.

The researchers tested their synthetic oligonucleotide on a receptor involved in tumors called the epidermal growth factor receptor (EGFR), which is associated with advanced-stage, large tumors that typically have a poor prognosis. The idea was that the GPNA would be able to block the synthesis of key proteins that lead to growth of the tumor.

The effects of the study on mice indicated that the GPNA, which was injected in the stomach, began having an impact on head and neck tumor growth within one week; this was a two-week improvement over current oligonucleotide treatments. This accomplishment was even more significant because the treatment didn’t have to be directly injected into the tumor, or even close to the tumor.

This development could prove beneficial to those whose cancer has metastasized. “That was sort of the ultimate goal of the research,” Ly said.
Next, the researchers ran trials comparing their GPNA to erlotinib and cetuximab, two different medications that also target EFGR. The GPNA had comparable effects on tumor suppression to the FDA-approved drugs.

Even more remarkably, the GPNA was also successful at delaying the growth of a tumor of a mutated, resistant strain of EFGR. It’s this result that is groundbreaking, Ly said, as patients with this strain would normally have no further treatment options.

The team has plenty of work to do for the future, however. An actual form of medication utilizing this mechanism wouldn’t be available for years, and that’s only if every step of the research process goes perfectly. The study also looked at a very small number of mice, so it’s still possible that the oligonucleotide could pose unforeseen health risks. Ly is optimistic about the future, but is proceeding cautiously in this fight against cancerous tumors.

“We don’t want to publish for the sake of publishing papers,” he added.

Bahal, however, doesn’t hide his excitement. “This is a great step forward toward GPNA-based gene therapy and will serve as platform for targeting many other genes accountable for different kinds of cancer,” he said via email.