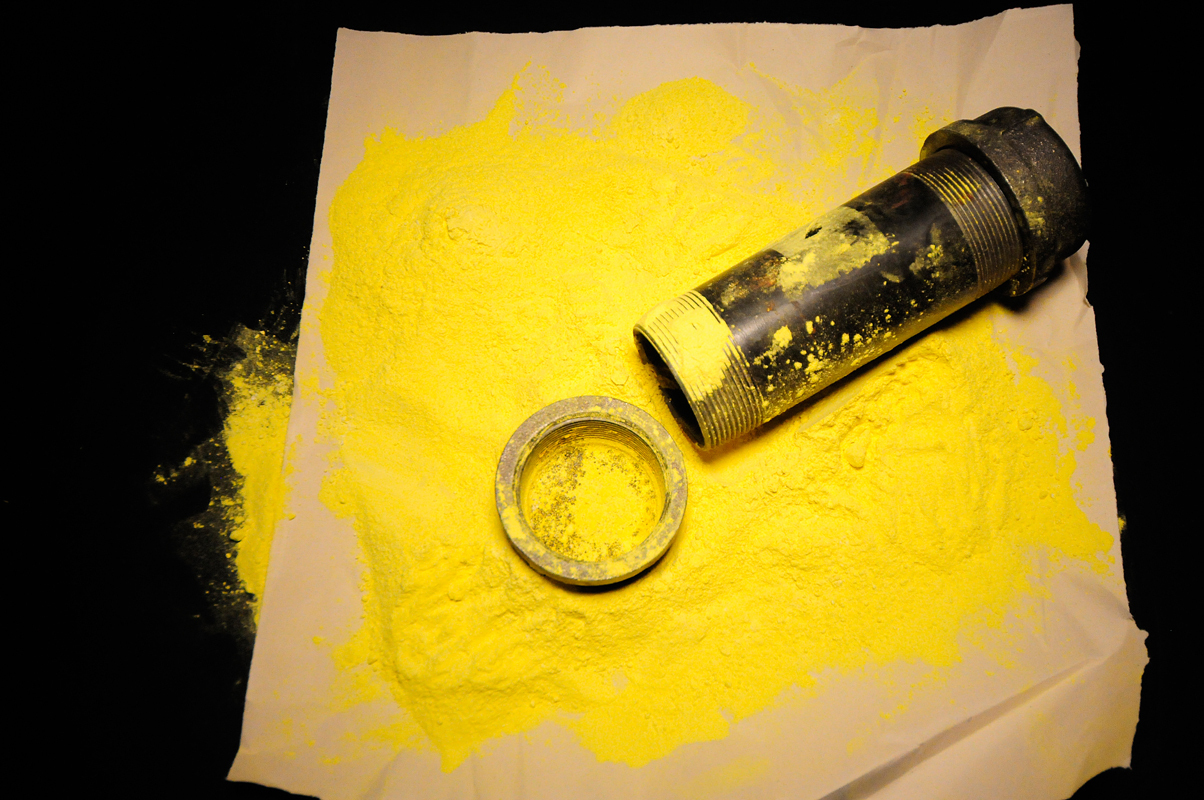 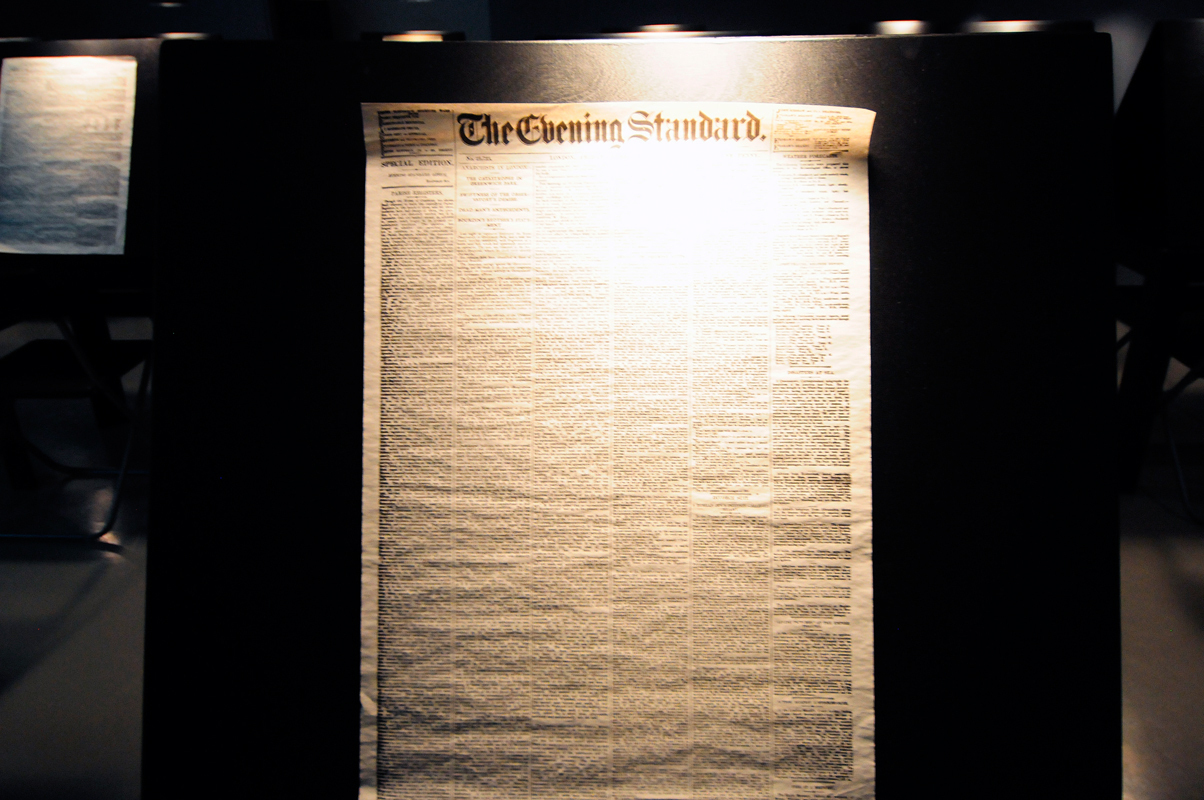 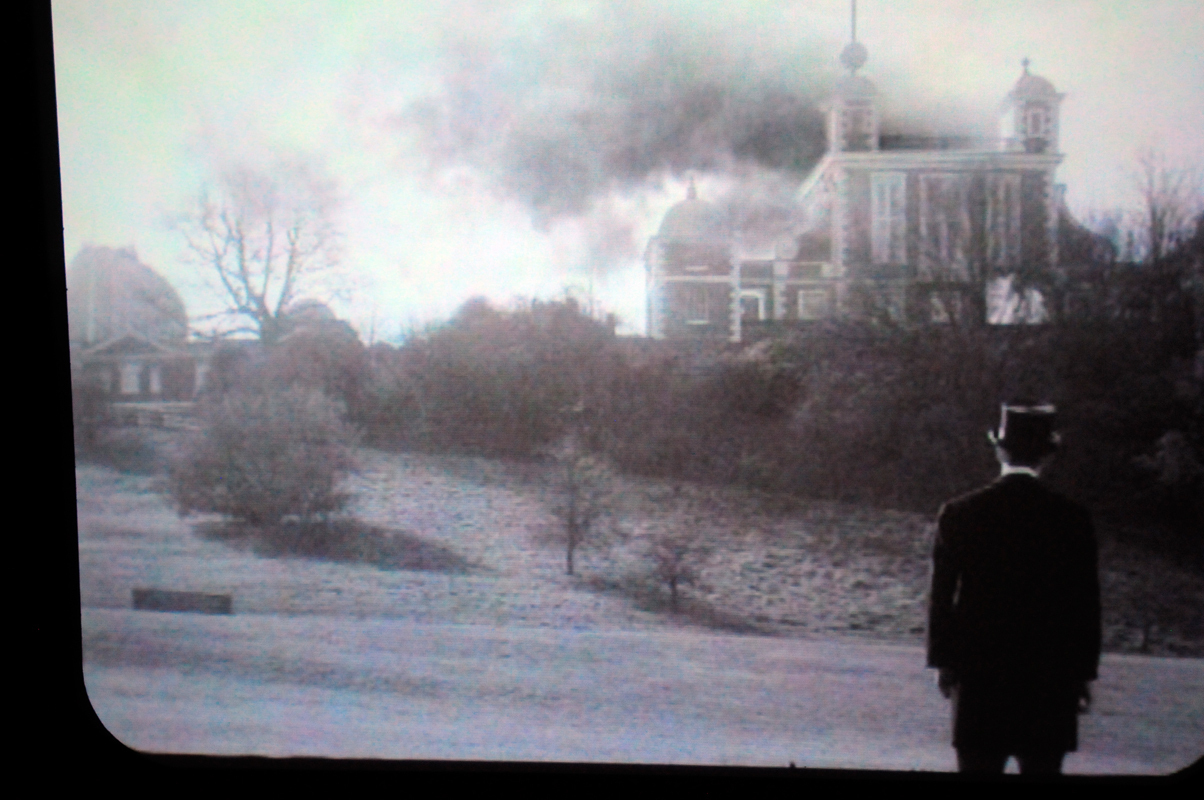 As part of “Greenwich Degree Zero,” a falsified film portraying smoke rising from The Royal Observatory, Greenwich adds to the artists’ imagining of the destruction of the Observatory. (credit: Chloe Lula/)

As individuals with unique experiences, humans have inherently subjective interpretations of the world. The City & the City: Artwork by London Writers, an ongoing exhibition at Wood Street Galleries, is a study of this concept — that our emotions and backgrounds shape how we perceive a place.

For experimental artists and authors Sukhdev Sandhu, Rod Dickinson, Tom McCarthy, and Rachel Lichtenstein, among others, London is a shared hometown through which they project their respective examinations of a modern city and varying ways to look at a single place through language and art.

The exhibit, which opened Sep. 31, is curated by Pittsburgh conceptual artist and writer Justin Hopper. Although the installation is aesthetically minimal, the entirety of the exhibit is ample in theoretical content. The artists challenge viewers to consider a world beyond the confines of their immediate environments, assessing the present in light of historical trends and alternate realities.

The first room of the gallery is dark and bare, save for a wooden table and a computer mouse. Once the mouse is engaged, projected images materialize against the walls and dissonant music spills out of speakers in the ceiling. The piece — titled “Night Haunts: A Journey Through the London Night” and created by London-based author Sandhu — recounts the gradual waning of the furtive nighttime atmosphere that characterized London throughout the Victorian era.

In the projected text, the author laments the city’s fabricated, disingenuous present. Certainly, London’s modern-day nighttime atmosphere no longer resembles the mysterious luster of its past. The text describes it as “a clutch of surly-looking bouncer-fronted clubs pumping out monotonous bpm, and from which puked-breathed likely lads emerge at 2 a.m. to pick fights with girls that won’t go home with them.”

Sandhu’s London has been economized, rebranded, and deauthenticated. Even the stripped physical structure of the installation seems to mirror the city’s emptiness beneath its ostensible personality. The room reflects the relationship between place and memory, depicting the author’s disillusionment with a city that has betrayed its own history.

London’s past is also surveyed in a piece titled “Greenwich Degree Zero” by Dickinson and McCarthy. The work is an alternative history based on French anarchist Martial Bourdin’s very real attempt to blow up The Royal Observatory, Greenwich in 1894. The artists demand that viewers consider the alternative to reality: What if Bourdin had succeeded in his terrorist attempt?

The thorough multimedia piece displays newspapers, photographs, and film that have been doctored to portray the destruction of The Royal Observatory, Greenwich. The artists even created fictional anarchist magazines to document Bourdin’s personal history and political activism preceding his attack on the observatory.

The counterfeit reports are comprehensive and creative, detailing Bourdin’s alleged desire to bomb the observatory as an expression of his frustration with the parasitical nature of an “idle and vicious” upper class. Dickinson and McCarthy’s interpretation, while mythical, is timeless and universal, speaking to individuals beyond the specific historical situation they examine in their piece.

Lichtenstein’s “Sight Unseen” is probably the most tangible avenue for historical analysis and the relationship between past and present. The piece is a site-specific installation that coincides with the launch of her new nonfiction book, Diamond Street: The Hidden World of Hatton Garden.

Hatton Garden is London’s diamond and jewelry quarter, home to an extremely private community of brokers and manufacturers. Working behind closed doors are silversmiths, gold beaters, pearl and diamond merchants, and lapidaries. In her piece, Lichtenstein reimagines the skills, stories, and memories of these individuals by recreating their artifacts. Velvet and gold objects form a multilayered homage to the craftspeople who operate in the Hatton Garden area.

The collection is not striking upon first inspection. However, a more profound understanding of its origins lend it considerable power as an ensemble. Unlike the gallery’s other pieces, Lichtenstein’s does not present the viewer with a metaphysical concept. Her representation of London is concrete; for her, it is a city built upon the endeavors of the industrialists that lived and worked in relative obscurity.

The respective historical studies of Sandhu, Dickinson, and Lichtenstein contextualize our modern world. Their perceptions of London’s present-day identity, along with the diverse relationships they have each cultivated with the city, are rooted in their own interpretations of historical perspective. Indeed, it is evident that each artist relates differently to London in the same way that many people relate dissimilarly to cities across the U.S.

It is the exhibit’s ability to transcend geography and audience that makes it so memorable. Every person establishes some relationship with the geographical places they inhabit. This unifying feature of The City & the City offers an experience that many people can relate to and ultimately acknowledge in their own lives.

In particular, Hopper hopes to allow viewers to examine these geographical places through a new artistic lens. “I’d be pleased if people came out of the show with, perhaps, a slightly altered idea of how art and literature can combine to envision new nonfictions — how can we look at our surroundings in a different way because of the ideas that these artists have presented. That’s how all contemporary art shows function: What’s beautiful in the world that I hadn’t previously recognized as beauty?”

However, Hopper hopes that the exhibit will reinforce an identity in the city of Pittsburgh specifically. “Pittsburgh has been seeking to newly understand its own identity, and artists and writers are a significantly important part of that process,” Hopper said via email. “London is the most written-about, artistically-represented city in the western world, and is currently the home of a fiercely independent and yet dominant scene of artists and writers looking to understand notions of place and memory and the intersections thereof.”

Pittsburgh, though not usually compared to London, is certainly similar in the sense that it receives varied and divergent reviews regarding its appeal as a city. It seems apt that the artists chose Pittsburgh as a location for a portrait of a place that shares so many of our city’s conceptual qualities.

“Psychogeographers, concrete poets, documentary-fiction videographers, liminal cartographers, avant-historians — London is littered with people creating new methods and concepts for looking at ‘place’ and at ‘the city’ in different ways,” Hopper said via email. “Pittsburghers are doing the same thing. Why not position the two together?”

Sandhu was impressed that Pittsburgh was host to the exhibition, noting in an interview with the Pittsburgh Post-Gazette, “People have been hearing about this show, and they say, ‘It’s in Pittsburgh?’ as though they expect it to be in California or New York or even Chicago. They say, ‘Let me know how it goes because we’d like to do it here.’ ”

Hopper has similar enthusiasm about Pittsburgh as a site for fostering cultural introspection and awareness: “As to why a show on London in Pittsburgh: Why not? If this show were in New York, Chicago, L.A., no one would bat an eye. Why shouldn’t Pittsburgh host an exhibition of important contemporary artists working in a new cross-disciplinary way, regardless of where they come from or what their subject is? The question should be, ‘Why isn’t there a show of work about Pittsburgh in London?’ ”