Researchers use cell phone data to track down malaria 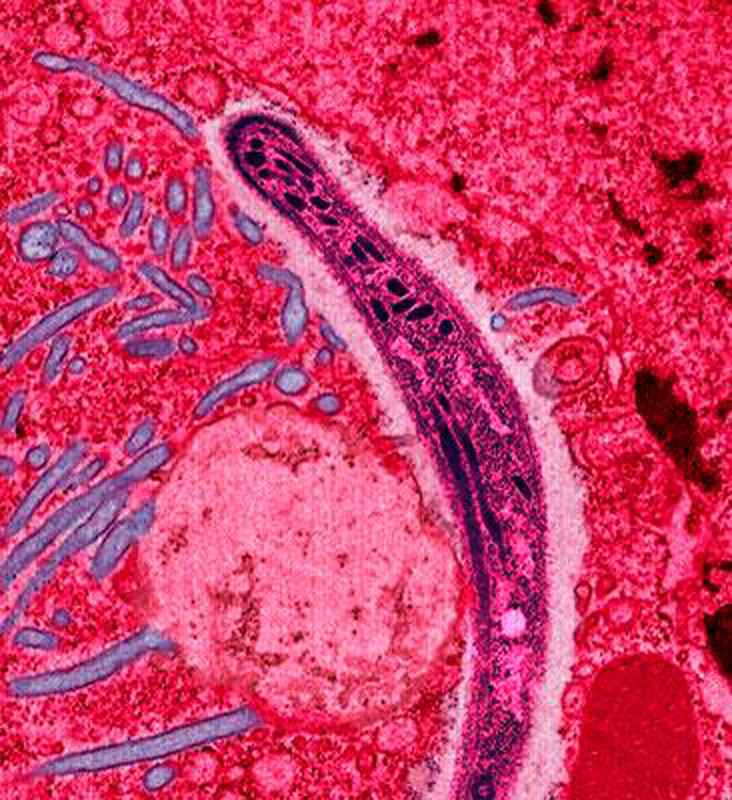 Ph.D. student Amy Wesolowski tracked the movement of Kenyans using cell phones to map the spread of malaria throughout the East African country. Above is an electron micrograph of a malarial sporozoite inside a mosquito. (credit: Courtesy of Ute Frevert and Margaret Shear via Wikimedia Commons )

According to the Kenya Medical Research Institute, malaria is the leading cause of death in Kenya, as well as in many other East African countries. Luckily, a new technique that uses cell phone data to track the movement of a population has made a breakthrough in medical research, and the new method will be able to assist in the fight against this deadly disease.

Amy Wesolowski, a Carnegie Mellon Ph.D. student in engineering and public policy, is a co-author of the paper “Quantifying the Impact of Human Mobility on Malaria,” which was published in the journal Science. The study followed the movement of 15 million Kenyans over a year.

Understanding human mobility and the mosquito-transmitted disease’s hot spots is critical to disease intervention. When a disease-carrying mosquito takes blood, its saliva often leaves behind the malaria parasite. But just as a mosquito can give the disease to humans, it is equally important to understand the implications of an infected human transmitting the disease to a healthy mosquito.

It’s a deadly cycle, and because humans travel much farther than the one-kilometer radius to which a mosquito usually keeps, humanity’s role in carrying and spreading the disease is more far-reaching than the insect’s.
But while mosquito populations and a region’s malaria density might be well-known factors in the disease transmission equation, the human factor is not. Out of the copious past studies on malaria, very few have gathered information on the topic.

Caroline Buckee, an assistant professor of epidemiology at Harvard University and the paper’s senior author, told CNN, “This is the first time that such a massive amount of cell phone data — from millions of individuals over the course of a year — has been used, together with detailed infectious disease data, to measure human mobility and understand how a disease is spreading.”

This big data allowed the research team to create a high-resolution vector map of human motion throughout the East African country. A vector includes both quantity and direction, and can visually describe the journey between malaria “source” settlements (malaria-infested regions) and “sink” settlements (regions where the disease is less prevalent).

These vectors reveal that, as expected, the highest percentage of human travel is to and from the capital, Nairobi. But this travel network did not overlap that of the parasites, indicating that the city-to-countryside travel has a minimal role in spreading the disease. Instead, the overlap of human movement and parasite movement vectors occurred mostly within the high-risk regions themselves.

The team found that the highest-risk areas are around Lake Victoria and coastal regions; the rural and humid environment supports more mosquitoes than do the mega-city’s streets.

This isn’t to say that large cities are safe from disease; the problem of disease prevention is complicated. “Governments and other organizations have often concentrated malaria control efforts in low-infection regions [like cities],” Wesolowski explained in a university press release. “Those initiatives cost less and provide sense of accomplishment, but ultimately may not be successful because, in those areas, there are many travelers from high-infection areas.”

The research revealed that the root of spreading malaria is not where there is the most human-to-human interaction, but where there is the largest mosquito-to-human interaction. Focusing control practices in these regions and providing cautionary advice and education to those who travel between them the most could reduce the disease spread by the mobile human population.

According to the researchers, doing so would decrease malaria prevalence in a more permanent and meaningful way than current methods can accomplish.

In a comment to ABC News, William Schaffner, professor and chairman of the department of preventive medicine at Vanderbilt University, said, “I suspect that some people will get antsy about Big Brother following you. I’m more excited about the possibilities to prevent serious disease.”