Spoon is tasty yet flawed 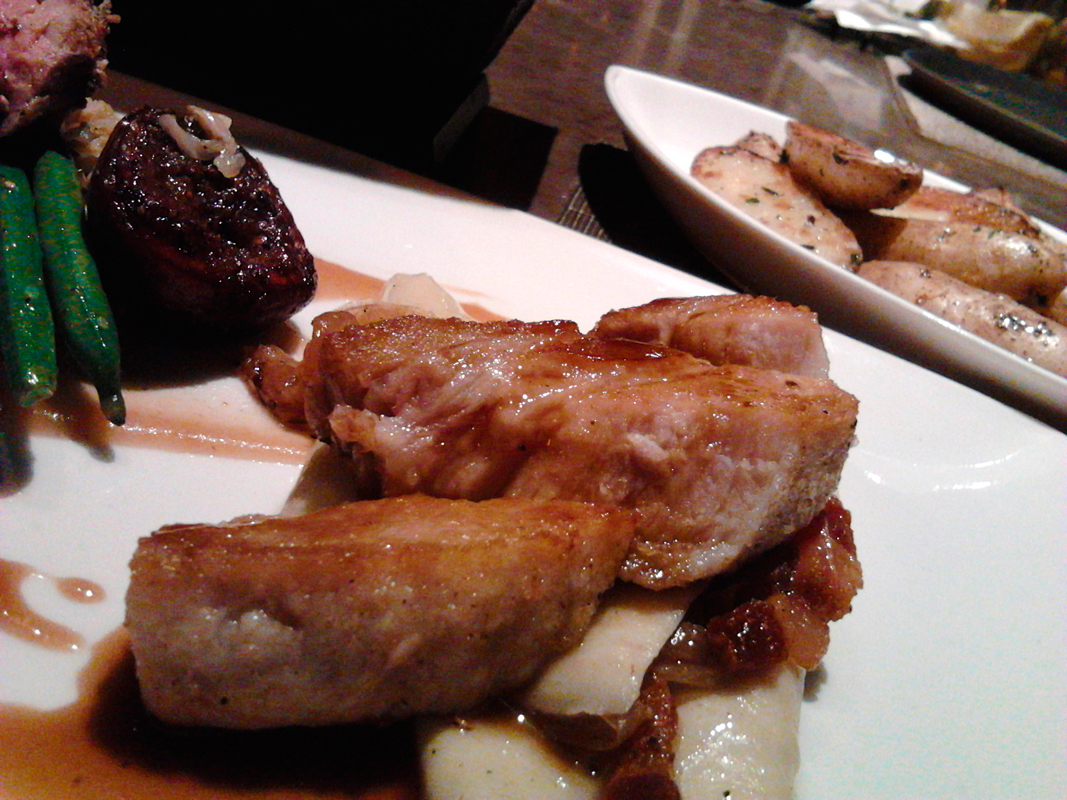 The food at Spoon offers an incredible explosion of flavors that is diverse and different. (credit: Jennifer Coloma/Operations Manager)

If you’re looking for a restaurant with lounge music, an older crowd, and expensive food, Spoon is a good place to start.

Located at 134 South Highland Ave., Spoon is approximately 30 minutes from campus by foot and six minutes by car. The price of its appetizers ranges from $7 to $14, and the price of entrées goes from $14 to $38.

A tip for eating at any restaurant: If the bread is good, the napkins are towels, and the placemats are fancy, then the food will likely be delicious but expensive. Spoon is dimly lit to create a romantic atmosphere and has a beige curtain going across half the room, so you could reserve the space behind the curtain for a formal event. Spoon also has a fireplace surrounded by couches for those waiting to be seated. Each door has a long, intricate spoon for a handle.

This meal consisted of the $9 roasted kabocha squash soup appetizer, the $25 pork three-ways entrée, the $5 roasted fingerling potatoes side, and $6 Sangria. If you want something to drink other than wine, Spoon may not be ideal: The restaurant mostly shelves wines, but it did have Wigle whiskey and some beers.

The staff served three different breads with the meal: cream cheese bread with chives, corn and dill bread, and fresh homemade baguettes. Sometimes the cream cheese bread had a mild dash of the topping that spiked the flavor of the soft bun; other times, it was layered on thickly.

The kabocha squash soup would be better suited as a bread dip. It has a very thick consistency and a mustard-like flavor, with pockets of meat and sour cream. Dipping the corn and dill bread in it is a bad idea, but if you dip the cream cheese bread in it, the flavors explode in your mouth.

The pork three-ways entrée has a wide range of flavor, but only displays two ways of cooking pork, as opposed to the advertised three. The first sample of pork was a marinated tenderloin sliced into thin strips with gravy drizzling, all on a bed of sauerkraut and green beans. The bedding had a distinct lemon flavor to contrast with the peppered pork.

The second sample was called a pork belly “haluski.” The meat was soft on the inside and faintly crunchy on the outside. Resting on a bed of noodles and bacon, it tasted like savory chicken with a bit of oil, and resembled lamb. Between the two meats lay a caramelized fig, which can be a nasty surprise if one expects another piece of meat.

Overall, the restaurant staff presents its food in a loving and appetizing manner, accenting the finer parts of a dish by laying them on top of the other food. Each piece contributed to the flavor as a whole, and if one part was unappealing, there was always another part to turn to.

Although the food is impeccable, the service at Spoon is less so. At least twice, waiters and waitress dropped dishes in the background. The bar service, however, was pleasant and attentive. One of the bartenders was cheery, although she kept dropping dishes.

Spoon is expensive and relatively far from campus, but it serves food that is diverse in flavor; it’s best for formal events or special nights out. Overall, it rates four out of five spoons.