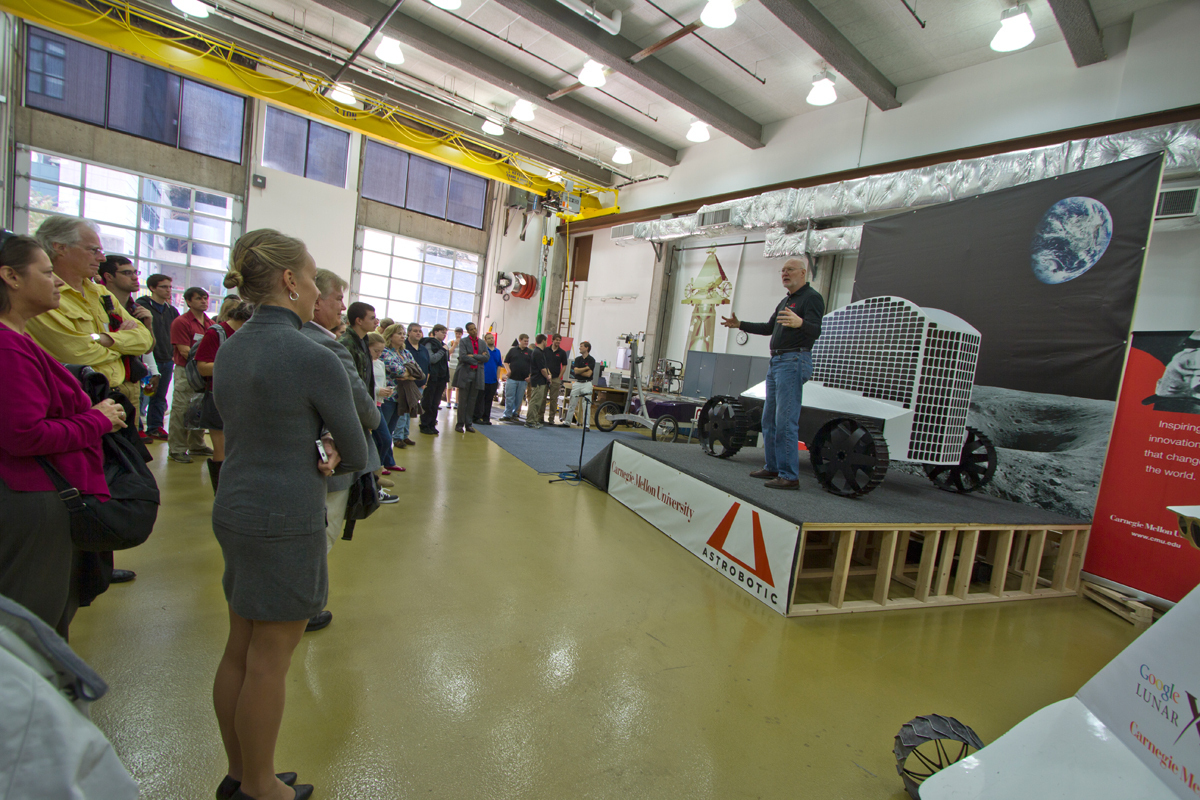 Alumni gather around William "Red" Whittaker in the Gates Center during Cèilidh Weekend as he presents Polaris, a lunar rover that will prospect the underground water and gas resources discovered as ice on the moon two years ago. (credit: Jonathan Carreon/Photo Editor)

As a part of the Cèilidh Weekend festivities, the Lunar Robot Open House brought students, staff, family, and alumni around a stage that held Polaris as William “Red” Whittaker spoke about the rover. A Robotics Institute professor and Astrobotic’s CEO, Whittaker described the goal of Polaris: to explore the vast underground water and gas resources discovered as ice on the Moon two years ago.

Polaris, equipped with a drill and other prospecting equipment, can answer questions about the gas that satellite data cannot. “What is it, what is it made of, where is it, what is its concentration, can you extract it, can you use it?” Whittaker said. “[Polaris] changes everything.”

Answering these questions could have a large impact on the future of space exploration. “This polar ice, when utilized, can transform the whole direction of space exploration,” Whittaker said. “Because see, if you could refuel after leaving the Earth, you can go anywhere.” But to learn how to use this extraterrestrial gas to fuel travel beyond our current limits, Whittaker explained we must first travel to the Moon.

And this will be difficult, he said, because the rover will be completely autonomous. Without radio GPS and remote control, the robot will have to compare its surroundings to satellite images of the Moon’s surface to determine its location. It will have to see and maneuver around rocks larger than 15 centimeters —or roughly the size of a bowling ball — that could obstruct its path. Perhaps the most difficult challenge is how the solar-powered Polaris would balance operating in areas that not only have ice, but also sunlight.

In October 2015, Astrobotic plans to send Polaris to a carefully chosen location near the Moon’s northern pole. Like the Earth, the Moon’s region with the most frozen resources is also its coldest and darkest: the poles. The rover must utilize complex algorithms to predict when and where shadows will fall as it travels the surface and as the Moon changes positions. For the mission to be a success, the rover needs to detect both ice and sunlight.

Polaris also needs to be able to successfully land, and to achieve this, Astrobotic is also developing a high-precision lander. Once the lander and its payload near the desired region of the Moon’s surface, it will slow down and hover for about four days before it decides where to land and make its slow descent.

In addition to accuracy, the lander will also boast versatility. Kevin Peterson, a Ph.D. student in robotics who has worked on the project for two years, explained the many features of the lander’s design.

“... this lander is designed for this rover, [but also] for the smaller rover and for carrying payloads underneath. We can go without a rover all together, as long as we are within our mass constraints, which are fairly large, actually,” Peterson said. “That lets us design one lander and then go out and find a payload.” This will allow the company, which is already receiving $1 million a year from NASA alone, to easily commercialize its lander to other Moon-goers.

“The company’s goal is not to win the X PRIZE; it is to commercialize space,” Aaron Acton said, referring to the Google Lunar X PRIZE, the largest contest of its kind in history. Acton has been working on the project for more than three years, ever since he began his master’s in mechanical engineering. “As part of that goal, to win the X PRIZE, would be great,” he added.

According to Google’s X PRIZE website, “A total of $30 million in prizes are available to the first privately funded teams to safely land a robot on the surface of the Moon, have that robot travel 500 meters over the lunar surface, and send video, images, and data back to the Earth.”

Astrobotic was founded shortly after the announcement of the contest in 2008, and is determined to compete with 26 other groups. With its team of over a dozen Carnegie Mellon students and alumni, the company is preparing to move to a new location so that it can expand its research and operations.