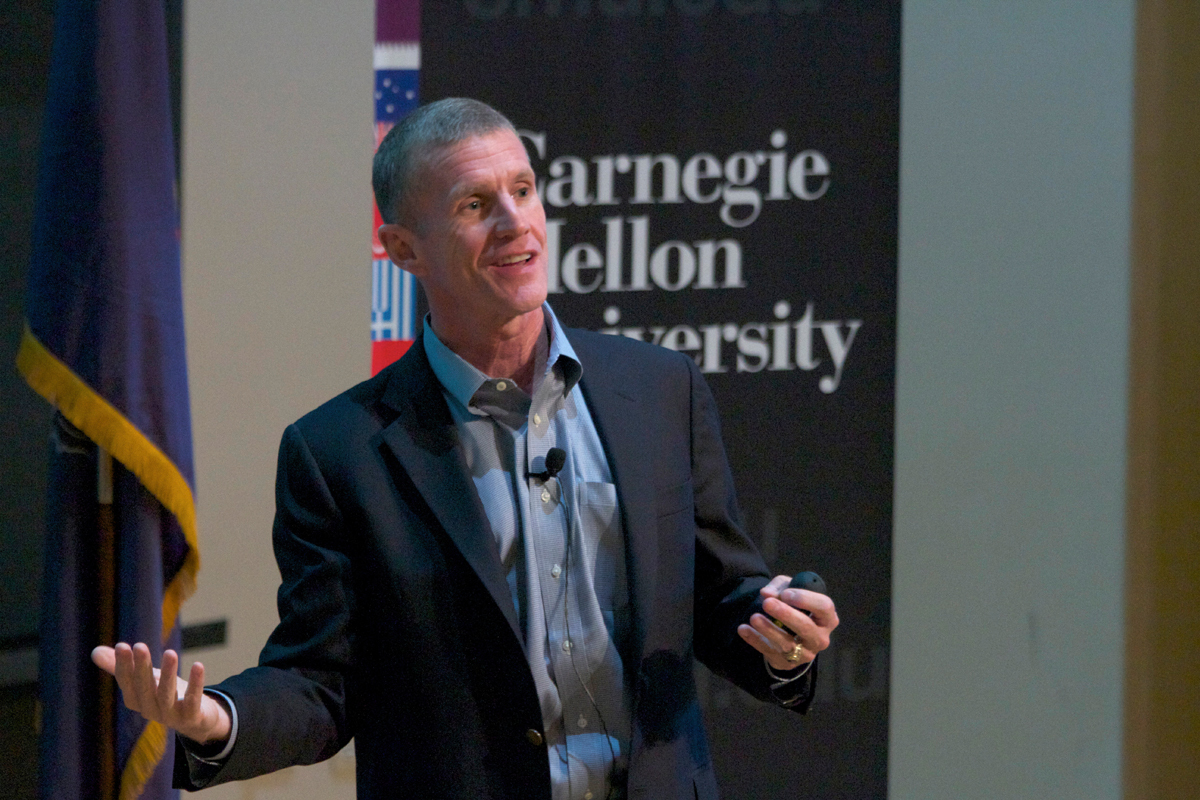 General Stanley McChrystal, four-star general of the U.S. Army and former commander of U.S. and international forces in Afghanistan, focused on relationships in terms of achieving strategic objectives during his lecture at Carnegie Mellon last Friday.

McChrystal presented to an audience of around 400 Carnegie Mellon students, faculty, parents, and alumni in McConomy Auditorium.

By taking a philosophical approach toward strategic issues, McChrystal employed both military and personal examples during his presentation as a means of offering applicable advice to his audience.

He pointed out that, during war, military generals tend to lose sight of relationships while focusing on certain strategic military objectives.

“In Afghanistan, what I think we did to a great degree was try to drive around the people,” McChrystal said. “We tried to focus on the enemy, focus on the Taliban, focus on Al Qaeda. [However], if we ignore the relationships with the people at individual, organizational, or national levels, [we] miss the point.”

“Relationships are the strategic intermediate objective. They are not a byproduct of getting something done; they are a way to get something done,” he added.

McChrystal applied his experience seeking and maintaining relationships to the battlefield, explaining that relationships with civilians played a crucial role during his tenure as a general.

“Relationships were not between me and the soldiers that I had grown up with; I needed relationships with kids, females, bearded elders who had a different culture — and I had to build real relationships, not just superficial transactional [ones],” he said.

McChrystal believes that focusing on relationships with civilians during war can keep ethical groundings in check.

Concerning the inevitable deaths of civilians during war, McChrystal said, “I think that ethics are more important during war than [during] any other time because you have things going on that put people at risk, and so your own ethical foundation needs to be extraordinarily strong. People do get hurt in war, and unfortunately, a lot of the time it’s civilians — but what we can never do is let loose of our ethical moorings.”
The general added that listening is the key factor to sound relationships.

Shifting gears to cite a personal anecdote, McChrystal referenced his relationship with his son to show how building bonds helped to achieve his goal.

Despite his son’s rebellious haircut choices and lack of educational drive, McChrystal said that during his son’s high school and college years, he tried to focus on their relationship instead of their disagreements.
“We maintained this close relationship because I figured that with time, he would turn out all right at some point, which is of course what happened,” he said.

McChrystal’s son is currently a counter-terrorist analyst. “If we had broken the relationship earlier at some point, I don’t think any of that would have happened,” McChrystal said. “[The relationship] is the essential enabler.”

McChrystal also pushed the importance of relationships on a larger scale, using the fall of America’s GDP and the subsequent decline in U.S. global economic prevalence as an example.

He explained that this downfall should not be a hindrance, but rather a reminder that it is becoming increasingly more important to build relationships with other nations.

“Instead of one world leader, we now have groups of world leaders of which we must be credible and legitimate members,” he said.

McChrystal highlighted empathy and self-discipline as traits that display good command. He said, “If you can’t put yourself in somebody else’s position, it’s really hard to lead people. It’s hard to convince them that you’re thinking about them.”

McChrystal’s lecture was sponsored by Carnegie Mellon’s Center for International Relations and Politics (CIRP) and the Humanities Scholars Program.

Kiron Skinner, associate professor of social and decision sciences and director of CIRP, said, “I thought that [the most salient point of McChrystal’s lecture] was that he focused on people, because a lot of time when we think about war it’s about bombs and bullets and killing people and breaking things, but he really talked about the role that people play in healing nations and overcoming conflict. For a four-star [general] to make that kind of argument was extremely profound, and I think it will affect many of our students who are thinking about a career in national security.”

Students responded positively to McChrystal’s talk, saying that they enjoyed receiving a different kind of perspective on military strategies.

Sophomore international relations and politics major Jamison Howell said, “When you meet with a lot of political leaders it’s always great to know where they are coming from, and you don’t really get that from military personnel. However, [McChrystal’s lecture] showed that they are very compassionate, very understanding, and there’s a lot that goes into [warfare] — it’s a much more complex system, and I loved being able to hear about that.”

First-year international relations major Ariel Lee said, “I liked that McChrystal brought to our attention the fact that we have to look beyond the military’s immediate strategic goals toward the relationships we build with other people. When we attack other countries, it becomes a very impersonal thing because we’re not putting American civilians at risk, but we can’t lose sight that our enemies are actual people as well.”