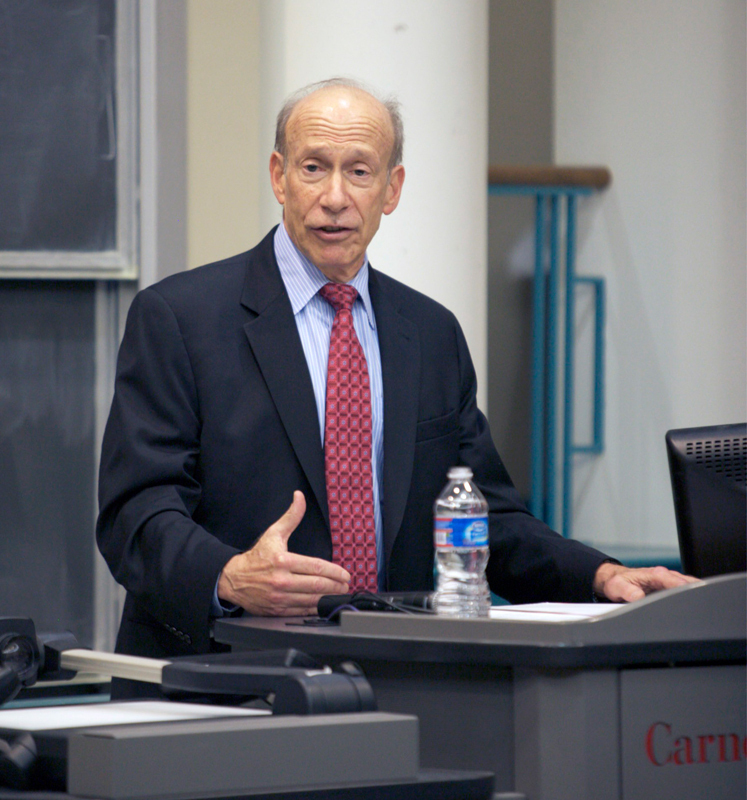 Ambassador Ira Shapiro spoke at Carnegie Mellon on Wednesday about the disparity between what he said was the greatness of previous U.S. Senates and the poor performance of today’s Senate. (credit: Jonathan Leung/Junior Photographer)

Former General Counsel and Ambassador for the Clinton administration Ira Shapiro delivered a lecture last Wednesday that compared the Senates of the past 30 years to the current Senate.

The lecture was hosted by Carnegie Mellon’s Center for International Relations and Politics (CIRP) and is part of an ongoing series of talks sponsored by the CIRP leading up to and following this year’s presidential election.

Kiron Skinner, director of the CIRP, said, “We think it’s important to bring in speakers that offer views from both perspectives [on political issues] before and after the election. Last week we had General Stanley McChrystal, and this week we are fortunate to have Mr. Shapiro.”

Shapiro, who has worked with the U.S. Senate and senators for the past three decades, began by talking about what he called “the last great Senate” — the Senate from the ’60s to the ’80s.

“I was at first worried that my nostalgia was making me see past Senates too favorably, and influencing my views on the present [Senate],” he said.

But after three years of research coupled with extensive personal experience, Shapiro published his book, The Last Great Senate. The book details the efficiency and successful bipartisan efforts of previous Senates.
Shapiro described the Senate of this past era as one with a record of monumental accomplishments: passing civil rights laws, creating Great Society legislation, and clashing with the executive branch over the Vietnam War and the Watergate scandal.

Shapiro pointed out that the senators of this period were able to achieve an extraordinary amount and avoid the gridlock of today’s senators thanks to their willingness to work in a bipartisan way toward the common good.

What made the “last great Senate” so great? Shapiro offered an answer in three parts.

First, he explained that many of the senators between the ’60s and ’80s had either fought in World War II or had been affected by it in some large way. He described the generation that went through and emerged from the war as one that had great faith in the government and what it could do for the people.

Second, Shapiro said, this generation of senators did not have the vitriol and polarization of parties that the current Senate suffers from. He described the relationship among the past senators as a “healthy ecosystem.”

“They would have fierce debates and then go out to dinner as friends,” Shapiro said.

Finally, as a result of the previous two points, the “last great Senate” was made up of a group of individuals that realized the Senate was a vehicle for national action, and not a vehicle for personal interest.

“They were in parties and represented states, but the national interest was first in their minds,” Shapiro said. “They were willing to take political risks, to be bipartisan, if they believed it was best for the country.”

He pointed to a series of events that led to the gradual change from the great Senate to the “miniaturized institution” of today. The first was the landslide victory of Ronald Reagan and Republican senators in 1980. “There was a great exodus of experienced senators, and there was an entrance of many neophyte conservatives,” Shapiro said.

Then, in the ’90s, things shifted for the worse when the resentment and polarization between the two parties in the House of Representatives began moving into Senate.

Since then, Shapiro said, it has gradually turned into more of a competition between two parties than an institution acting in the nation’s interest. “In the past, once an election was over, governing started. Somehow, we’ve entered the ‘permanent campaign’ and never a time for governing. There’s always jostling for a political advantage,” he said.

Shapiro said that much of today’s gridlock stems from the Republican Party. He pointed to the aftermath of the 2008 presidential election, when newly elected President Barack Obama faced the worst financial
crisis since the Great Depression and the prospect of ending two wars.

“If you look back at what happened, the Senate Republicans didn’t allow the stimulus to be big enough.... They tried to block the healthcare bill even though it contained ideas from both parties.... We got close to the brink of default in 2011. In the past, [the debt ceiling] would have gotten raised automatically,” he said.

Even so, Shapiro has some optimism for change.

“The hope that I see comes from the senators themselves. They are as frustrated with the hyper-partisan system as the public is. There is a chance for change now, but they must decide themselves to go back to being senators,” he said.

Those who attended the lecture responded positively to Shapiro’s talk, saying that his explanation of what made past Senates so effective was clear and insightful.

“What he said made sense,” said sophomore international relations and politics major Razghiem Golden. “A lot of times, politicians worry about staying in office more than getting stuff done. The change needs to start from the top down.”

“I’m Republican, but I think Obama is the best choice for the next election. He has the chance to do something more radical [if elected] because he doesn’t have to worry about running for another term,” Golden continued.

As Shapiro closed his talk, he reminded the audience both of the past Senates’ triumphs, and of the problems that face the current and next Senates.

“The next Senate elected in January has a great privilege; they walked where the greats walked. They have to work the way the greats worked,” he said.