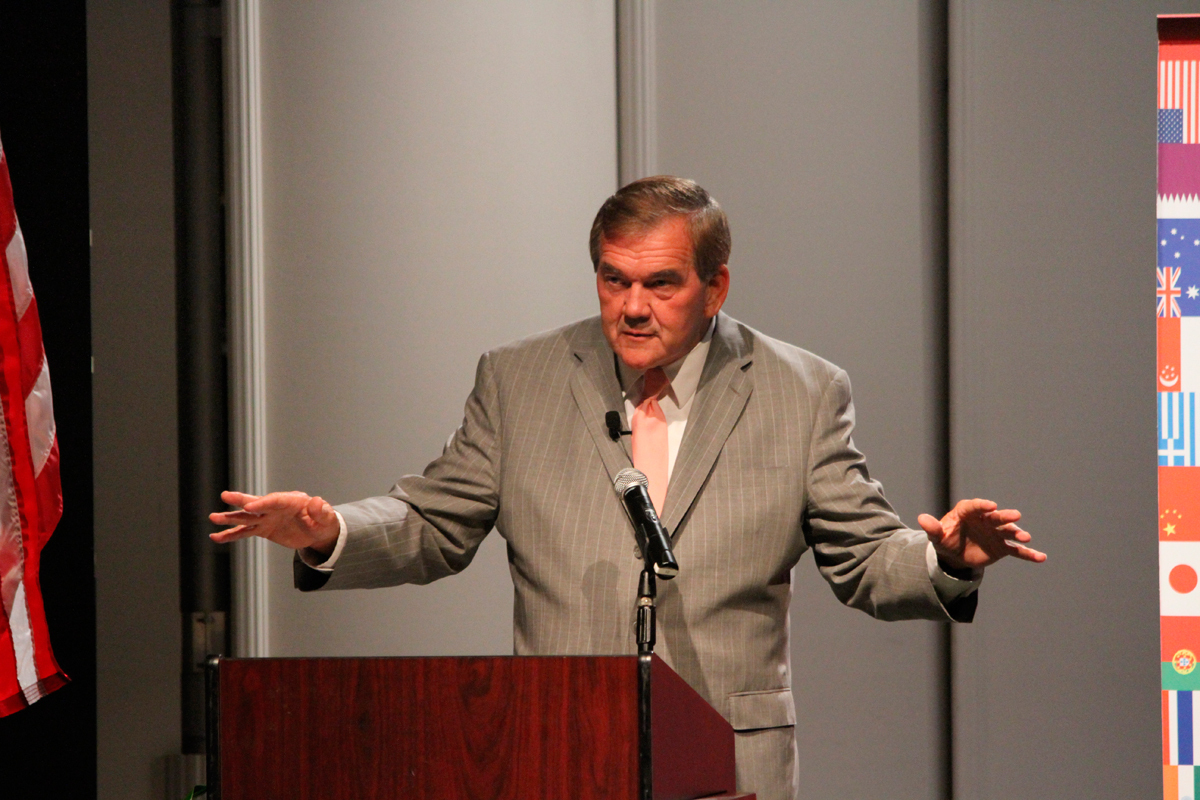 Former Pennsylvanian Republican Governor Tom Ridge spoke in Carnegie Mellon’s Kresge Theatre on Thursday about the issues in this year’s presidential campaign. According to the event’s program, the lecture was meant to “survey the political landscape and explore the primary issues of this campaign season and of America’s future.”

Associate professor in social and decision sciences Kiron Skinner is the head of the Center for International Relations and Politics, which hosted the event. Skinner said that the Center’s scope is not limited to international issues, and includes domestic ones as well. “Some of our speakers, like Governor Ridge, have held significant positions on the domestic side, as governor, as congressman, but also ones that have more international implications, like his time at Homeland Security,” she said.

The program for Ridge’s lecture gave a summary of his long career in U.S. government. After graduating from Harvard University in 1967, Ridge was drafted into the army as an infantry staff sergeant in Vietnam while earning a degree at Penn State University’s Dickinson School of Law.

Ridge’s political career began in the House of Representatives, where he served six terms. Next, Ridge was governor of Pennsylvania for two terms and later, following the events of 9/11, became the first Secretary of the Department of Homeland Security. Currently, Ridge is CEO of Ridge Global, a security and risk management firm based in Washington, D.C.

Ridge divided his talk into four main parts, dedicated to what he called the “four different areas where I do believe, regardless of the outcome of the election, the president has to make significant changes.” Ridge focused on global engagement — specifically addressing military strength, diplomacy, and foreign aid — the budget deficit, energy policy, and immigration policy.

Regarding a strong military, Ridge said that it is an “absolute imperative that we maintain one.” Along with the need for a military leadership, Ridge emphasized the need for a generous foreign aid policy. “I would rather see preemptive aid than preemptive military.”

Ridge’s lecture also addressed some of the country’s most pressing issues at the moment, such as the national debt. “We have got to get more serious about the deficit, folks,” Ridge said. Included in Ridge’s proposed plan were cuts to government welfare programs like Medicare, as well as an insistence on a return to manufacturing and “making things” as an attempt to “reinvest in America.”

Energy policy reform, too, was an important point of contention for Ridge; he specifically addressed the U.S.’s over-reliance on fossil fuels.

“We need presidential leadership on energy policy ... the world has to wean itself off this addiction [to fossil fuels] — there are multiple sources of fuel out there,” Ridge said.

While Ridge acknowledged the U.S.’s natural wealth of coal-based resources, he sees a more sustainable future in newer types of energy, such as nuclear power.

Another issue on which Ridge gave an opinion was the U.S.’s immigration policy. Talking not only about immigration from the southern border, Ridge had a globally-oriented view: “We need an immigration policy that recognizes the diversity of the world.”

The speech ended with a reference to what Ridge calls the “American brand,” and the global reputation of the U.S. “If America is a product, our values, I think, are our brand.”

In a Q & A session after the speech, Ridge opened the floor to students and faculty members. The questions asked addressed a broad range of contemporary sources of political contention, including terrorism, immigration policy, and the U.S. diplomatic stance regarding Israel.

Ridge was very willing to engage his audience, and said while taking refreshments after the talk, “I appreciate the audiences who are willing to listen, hopefully learn, to be provocative in a very respectful question and answer session. So for me, it’s not so much what I get a chance to say, for me it’s even more fun to get a chance to interact based on what I’ve said.”

Jenna Asperslag, a first-year international relations and politics major who attended the speech, embraced the opportunity to hear a fresh opinion on American politics. “It was ... interesting to hear his perspective on what the politicians need to focus on,” she said.

Ridge is familiar with Carnegie Mellon and the city of Pittsburgh: He is a native of the city, and his daughter, Lesley Ridge, is an alumnus of the university.

Ridge said after the talk, “Interaction with college students has been, generally, part of both my public and professional life that I have enjoyed the most ... I thought it was a really good session.”