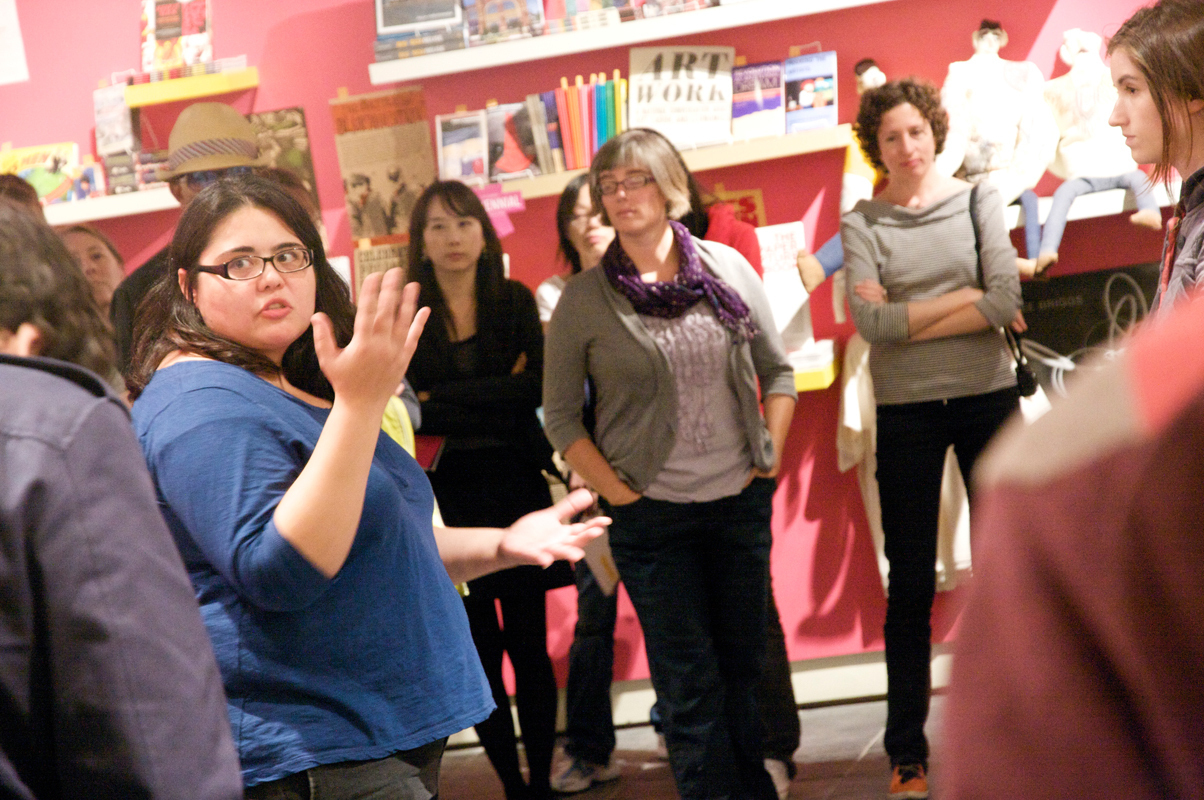 On the opening night of the exhibit, the gallery’s guests were led on a tour through the installations, with the curators and artists present for questions and comments. (credit: Jonathan Carreon/) 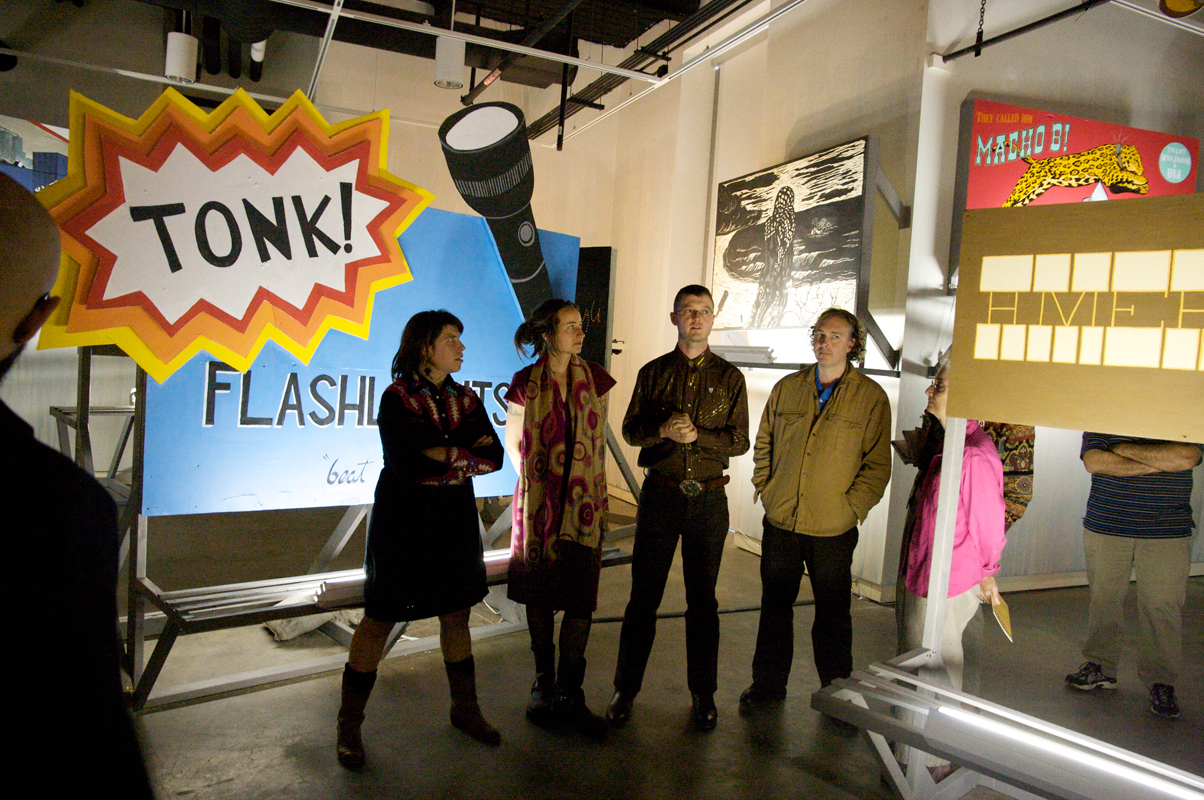 The power of the collective is the center of attention at the Miller Gallery’s 2011 Pittsburgh Biennial exhibit, an exciting display of work by five local art organizations.

On the first floor, the group Temporary Services, consisting of artists Brett Bloom, Salem Colo-Julin, and Carnegie Mellon alumnus Marc Fischer, presents a collection of books from the “Do-it-Ourselves” movement, titled The Self Reliance Library. Along with the book collection, the exhibit included quotes picked from the collection and quilted on discarded trash bags. Convincing visitors to interact with work in a gallery setting can be difficult, but The Self Reliance Library does it well. Each of the books looks like someone’s worn-out favorite, lent to a friend to share some new ideas that they would really enjoy. The quotes, too, invite you to look a little closer. Each is an enticing view into something resting on the shelves right in front of you, asking you to pick up The Survivor if only to find out why “the inexperienced dreamer simply cannot survive alone.”

From there on, every floor houses two separate exhibits from two separate artist collectives. The second floor is split between a politically motivated billboard landscape from artists’ cooperative JustSeeds and an informative space on sustainable deconstruction by artist group Tranzformazium. The contrast between JustSeeds’ larger-than-life billboard, reading “A Billionaire Stole your Job, Not Migrant Labor,” and Transformazium’s neatly stacked pile of bricks, cleaned by the three female artists in attendance, was interesting to say the least, but each concept shone brighter when viewed separately.

JustSeeds’ side packs a powerful visual punch. The billboards loom over you and huddle together, creating walls of industrial-looking forms illuminated by fluorescent lighting that forcibly sell beauty and acceptance. JustSeeds’ exhibit is an ironic combination of street art, a sterile gallery setting, and harsh material forms that ends up coming together to effectively sell its cause — migrant worker reform.

Tranzformazium, on the other hand, uses visual aids to enhance a personally powerful topic. The four women who compose Tranzformazium, Ruthie Stringer, Dana Bishop-Root, Leslie Stem, and Caledonia Curry, have been sustainably deconstructing their North Braddock-based home since the spring of 2009, and they have learned a lot about both their community and green building practices along the way. Their exhibit showcases a mixture of these revelations through props, interactive pamphlets, and a video documenting their process.

Global Cities, Model Worlds sits in the center of the room, splitting subRosa’s exhibit in two. The show consists of photos comparing Olympic stadiums, cities before and after “mega-events,” and birds’ eye views of coastlines, along with models illustrating facts about world fairs and Olympic events. Each model or photo presents a wealth of information, showing readers that almost all world fairs and Olympic events have been hosted in Europe, the United States, or Asia, and that Beijing citizens were forcibly evicted from their homes in preparation for the 2008 Olympics.

subRosa’s space is less informative and more exploratory, asking visitors to essentially create the art themselves, by either writing a letter to a feminist scientist or by sitting down at a tea table and having a conversation with a total stranger (an idea borrowed from a Virginia Woolf essay calling for “tea table thinking”). subRosa’s exhibit tries to connect people, either by fostering communication between isolated pockets of high-profile women or by simply putting strangers attending a gallery opening together. Only time can tell how productive their idealistic concept will be.

These five organizations present inspiring examples of the transforming power of collaborative art, and the results are worth the trip. Be sure to stop by the Miller Gallery to see their section of the Pittsburgh Biennial, running through Dec. 11, and visit their website to find out more about workshops associated with Transformazium’s work. In addition, revel in some Pittsburgh pride by visiting Biennial events happening across the city at the Carnegie Museum of Art, the Andy Warhol Museum, Pittsburgh Filmmakers, and the Pittsburgh Center for the Arts.