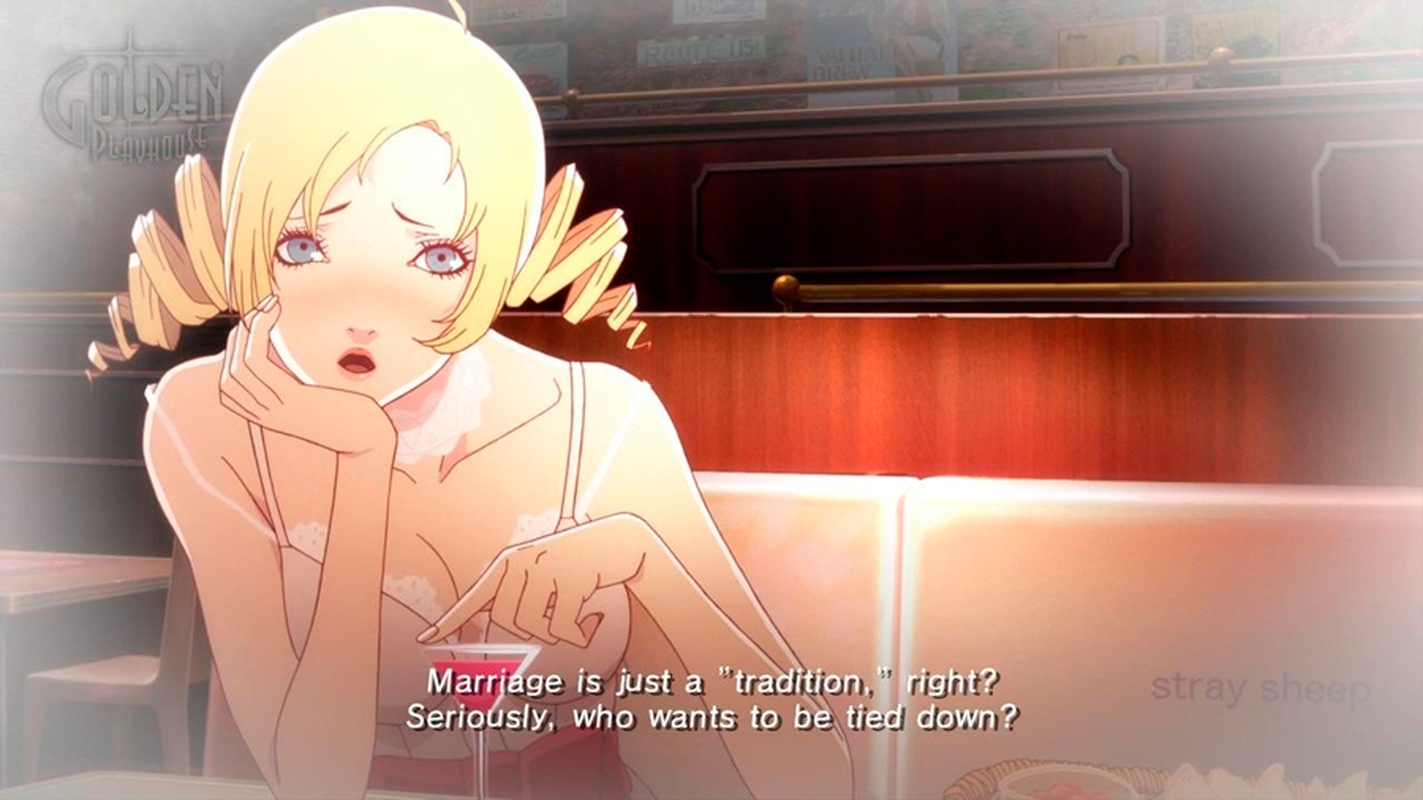 Catherine, a blonde bombshell, forces the main character to confront his own life goals. (credit: Courtesy of Atlus) 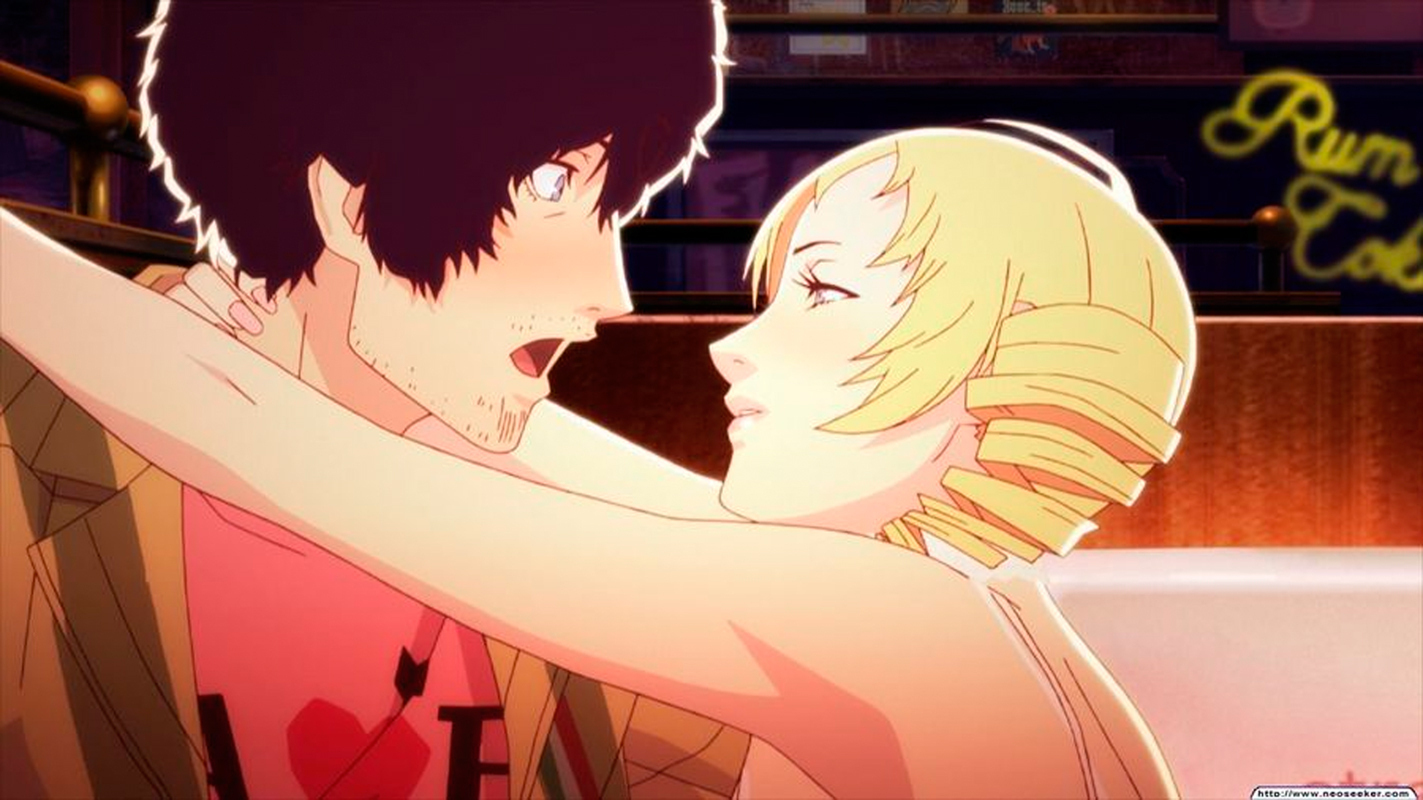 The player makes social choices on Vincent’s behalf that ultimately determine whether he will end up with Katherine or Catherine. (credit: Courtesy of Atlus)

It’s rare to see a game pushing a realistic social issue — in fact, most video games ignore modern issues altogether in favor of a suspended, thrilling reality (a la Call of Juarez or Battlefield). Catherine, a new Playstation 3 and Xbox 360 title developed and published by Atlus, diverges sharply from this stereotype and brings some truly relevant themes into the spotlight.

The game’s story follows a man named Vincent, a software engineer trapped in a mid-’30s crisis of drinking and aimlessness. He has been dating a girl named Katherine for years, but is terrified of committing to her. Enter Catherine, a blonde bombshell who just happens to share the same name as Katherine. Initially a one-night stand, Catherine pulls Vincent from the pressures of his relationship with Katherine and draws him into a steamy affair. He is ultimately forced to confront his own life goals and ponder the nature of his two romances.

The first half of gameplay involves making social choices on Vincent’s behalf. During Vincent’s evenings of drinking at The Stray Sheep, the player not only interacts with the other patrons of the bar face-to-face, but must also respond to calls and text messages from both Catherine and Katherine. At The Stray Sheep, the player picks up local rumors, helps other characters sort through their own personal issues, and juggles two love affairs simultaneously. The player is given a meter that, similar to the game Mass Effect, runs the gamut between pure red (Catherine) and pure blue (Katherine). Certain actions — for example, refusing to meet with Catherine or supporting the idea of marriage to Katherine — will cause the meter to turn more blue, while favorably responding to Catherine’s sexy cell phone pics will turn it red. With time, it’s soon implied that there’s more to Catherine than meets the eye.

The secondary narrative follows a series of strange deaths in Vincent’s area; initially more of a backdrop, Vincent soon begins to have terrible nightmares in which he is turned into a sheep and prepared for slaughter. To escape certain death, he must spend each night climbing blocks and solving puzzles. This is where the core gameplay starts: Players start off by pushing around regular blocks to make climbable formations, and the levels later scale up to special blocks — slippery “ice” blocks, cracked blocks, “flame” blocks, and immovable blocks. Over the course of a week, the puzzles get gradually more difficult, and each one has a time limit, after which the blocks beneath Vincent collapse and the level restarts. Independent of the story line, the gameplay is compelling enough to stand on its own, and it brings a unique perspective to a tradition of block puzzles dating back to early Zelda games.

At the end of each level, the player is asked a question. For example, “Is marriage the point where life ends... or begins?” The responses to these questions, alongside the player’s choices in previous conversations, will influence the outcome of the love story; there are eight endings to the game in total.

Ultimately, Catherine does have its flaws. The graphics are not much more advanced than the Persona graphics of previous years, and the puzzle gameplay can get repetitive in later stages. Although the gameplay tries to become more difficult, the player can learn new techniques that make it easy to skip entire sections of puzzles.

Additionally, the socialization aspect of the game soon becomes more of a mechanic used to game the system — for example, trying to get “the Catherine ending” involves consistently being mean to Katherine, even if that is not what the player would otherwise choose. For this reason, upon a first play-through, players should disregard trying to achieve any one specific outcome, and instead react as they would in real life to the given situations the game presents.

But Catherine manages to pull off a deeper message that is well tailored to today’s college-age generation: It deals with the post-coming-of-age slump and the pressures society places on men and women — to fall in love, to rush through youth and build a life, and to be productive members of society at all times. The fear that Vincent feels as a character is reflected in the generation playing Catherine, a generation that is often called “slow to mature.” Through Vincent, Catherine makes a case that being afraid of these changes is natural, but to avoid them altogether is ultimately a path that few are able to take.