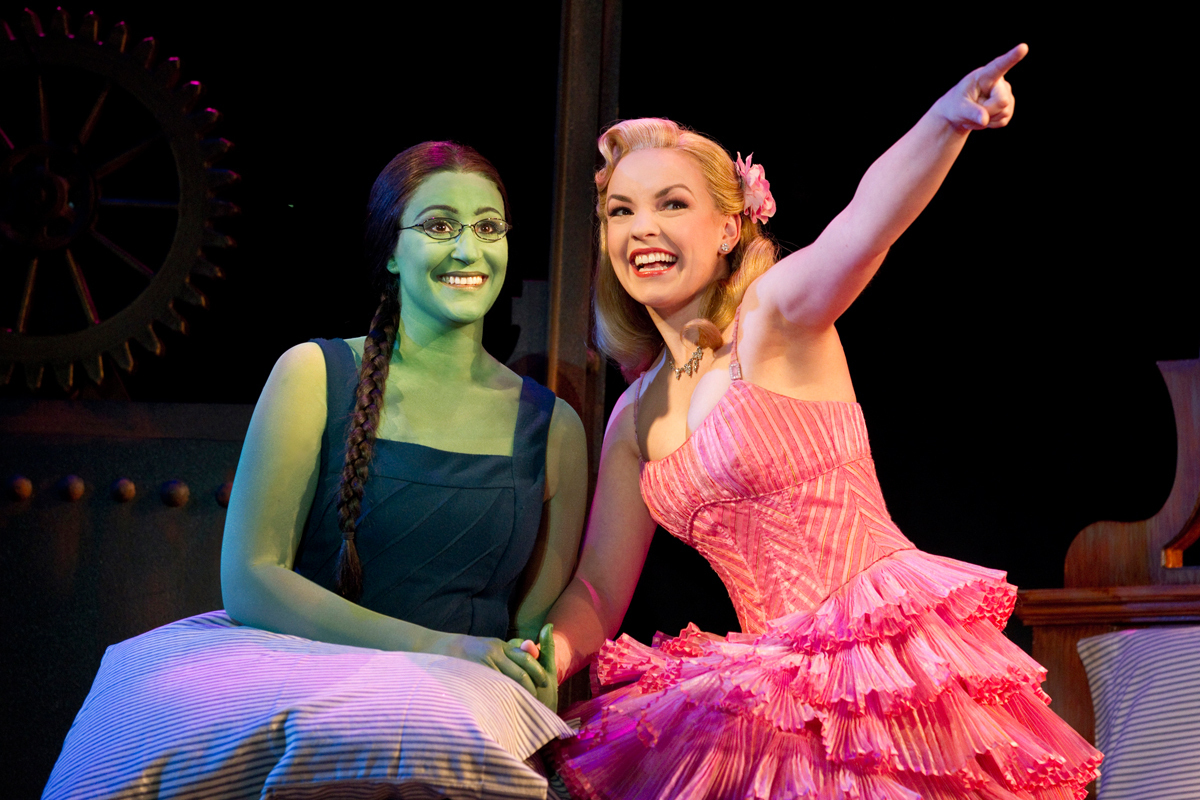 The relationship between Elphaba (Anne Brummel) and Glinda (Natalie Daradich) is the driving force behind much of _Wicked_'s appeal. (credit: Courtesy of Joan Marcus)

Unloved by her father and despised by all around her, the Wicked Witch of the West still managed to charm Pittsburgh last Thursday night. Last week marked the return of Broadway Across America’s production of Wicked to Pittsburgh, bringing Elphaba, Glinda, and all the wonders of Oz to the Benedum Center for the first time since 2008.

Wicked portrays an alternate version of the classic story of The Wonderful Wizard of Oz. Instead of following Dorothy, the musical focuses on the villain of the original tale, Elphaba (Anne Brummel), better known as the Wicked Witch of the West. Instead of being characterized as heartless, Elphaba is portrayed as misunderstood, forever in the shadow of her rival and later friend, the flashy blonde Glinda (Natalie Daradich). Although it is based on a 1995 novel of the same name by Gregory Maguire, Wicked the musical has taken on a life of its own. It has broken box office records since its first Broadway showing in 2003 and has toured worldwide.

The relationship between Glinda and Elphaba is the core of Wicked’s appeal. Although originally intense rivals, the two become close despite their opposing personalities. Daradich embodied the over-the-top, too-perfect, always-popular Glinda, making the audience laugh with her unnecessary posturing. In a sharp contrast, Brummel captured the cynical, brooding nature of Elphaba. The pair’s interaction provided comic relief throughout the light-hearted first act, particularly in “What is this Feeling?,” a duet about their mutual loathing.

For the most part, the supporting cast in Wicked serves only to enhance the characters of the two leading witches. Elphaba’s younger sister, Nessarose (Michelle London), is a catalyst for the early interactions between Elphaba and Glinda during their time at school. Compared to the strong leading roles, however, Nessarose often fades in importance.

Further complicating the duo’s relationship is arguably one of the most dynamic characters in the show, Fiyero (David Nathan Perlow). Initially appearing just as shallow and carefree as Glinda, this young prince ultimately becomes more selfless than either Glinda or Elphaba. Perlow perfectly captured Fiyero’s complexity, from the early scenes where he wants only to dance through life to the moral torment he faces later on.

Taking place in the Land of Oz, Pittsburgh’s production of Wicked uses special effects and garish costumes that enhance its inherent fantasy. The Emerald City, capital of Oz and home of the Wizard, is an overwhelming rush of green dresses, green hats, and green canes. The elaborate, often gaudy costumes make it quite clear that the setting is somewhere more fantastic, more wonderful than anywhere on Earth.

The Emerald City also features the most stunning effects in the musical, including the giant mechanical head that speaks for the Wonderful Wizard of Oz (Don Amendolia). Meeting the Wizard presents Glinda and Elphaba with a moral dilemma and leads into what is probably the best-known song from the show, “Defying Gravity.” Suspended in air, surrounded by fog and ethereal light, Elphaba realizes her independence and embraces her identity as an outcast.

In addition to the costumes and effects, Wicked’s ambience is enhanced by the varied set designs. The first thing audiences notice upon entering the theater is the large dragon head dominating the top of the stage. The purpose of this mechanical dragon is never fully explained, and it seems generally unnecessary except for dramatic effect. Most scenes have fairly simple sets, with a couple of beds to indicate a dormitory, for instance. One sharp exception is the Wizard’s palace. In addition to the mechanical head, there are also steampunk-esque towers and gears that move around the stage. The Wizard’s monkey servants climb around these towers to add a sense of urgency and chaos to the relevant scenes.

Although Wicked is an enjoyable escape from dreary Pittsburgh, it has its limits. The witches’ relationship is far more entertaining than the actual plot, and the self-conscious Wizard of Oz allusions and occasionally awkward song lyrics detract from any deeper message. Referring to Dorothy’s dog jokingly as “Dodo” rewards those familiar with the original story but breaks the audience’s suspension of disbelief. A few of the songs (“I’m Not That Girl” and “For Good,” in particular) are touching, but on the whole Wicked shines more when it tries not to take itself too seriously.

Despite its minor flaws, Wicked is an engaging, entertaining show, and the cast treats it with just the balance of exaggeration and sincerity that it needs. The memorable characters and musical numbers will remain long after the curtain falls.