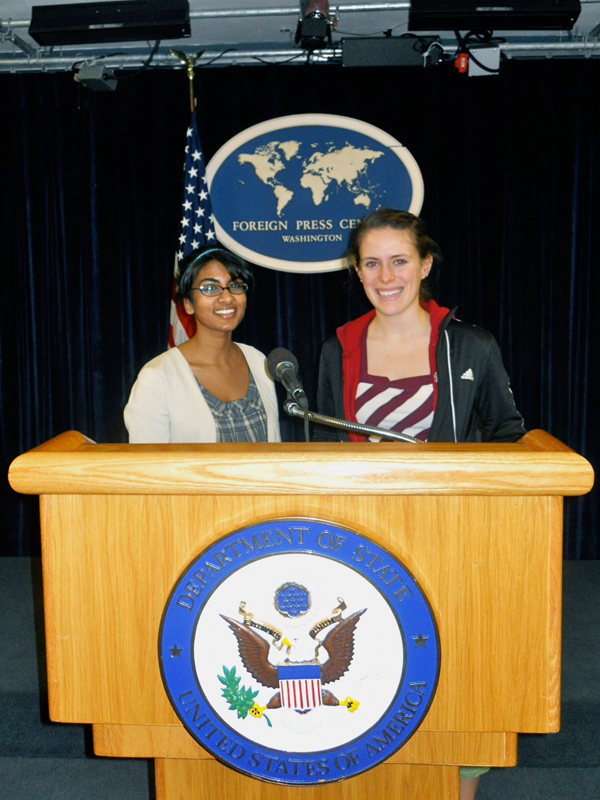 Easterwood and Srujana Penumetcha, both seniors in H&SS, pose at the Foreign Press Center in Washington, D.C. (credit: Courtesy of Carmen Easterwood)

Last spring, along with several other Carnegie Mellon students, I participated in the Washington Semester Program at Georgetown University. The experience was nothing short of incredible — I loved being surrounded by people who were so interested in and informed about politics, policy, international affairs, and all the other topics centered in D.C. Being able to witness national and international events first-hand, such as the government’s near-shutdown and the announcement of Osama bin Laden’s death, was an amazing learning experience that will influence the rest of my academic and professional career.

My internship was probably the most important part of my experience in D.C. I worked at the Millennium Challenge Corporation (MCC), a government agency formed in 2005 by President Bush to distribute foreign aid in a more impactful way and to hold governments more accountable than USAID’s model. I worked in the Department of Private Sector Initiatives, which works to encourage public-private partnerships in our invested projects and encourages American companies to make investments that would allow the impact of our projects to continue, even after MCC had used up all its funding for the project.

Specifically, I worked on projects in Namibia, Malawi, and Ghana. I was most involved in the Namibia project, which focused on Indigenous Natural Products (INPs). These products, mostly roots and fruits, can only be found in certain parts of Southern Africa and are often gathered by Namibian women to earn extra income. MCC was asked to help figure out some potential methods of streamlining the supply chain of gatherers, aggregators, exporters, and importers. I conducted research on which U.S. markets would be the easiest and most profitable to enter (for example, many of these INPs could be used in cosmetics, various food products, herbal medicines, or as components of industrial processes). After gathering the information, I gave a presentation on barriers to entry into each of these markets and possible marketing strategies for each of these markets.

One really cool part of my internship was getting to attend conferences and meetings led by international development professionals from all over D.C., especially those focused in African agricultural development, which was my boss’s specialty. I learned a lot about the roles of governments, banks, small and large farmers, agricultural businesses, and technology in agricultural development, but mostly I learned just how much I didn’t know about the subject. I hope to make my future career in economic development, so this internship was an eye-opening experience that taught me a great deal about how governments and NGOs interact with developing countries.

In addition to the internship, the academics at Georgetown were great. My favorite parts were having constant access to high-quality (and often famous) guest speakers and the intriguing field trips. I also really enjoyed the independent research project, where I got the chance to research a topic closely related to my internship and hopefully to my future career, which was the role of China in African development. And, despite having never heard of “public diplomacy” before getting to Georgetown and being unsure how I ended up in such a class, I ended up really enjoying my academic seminar on the topic.

Public diplomacy refers to the government’s efforts to shape the public’s opinion of the U.S. in foreign countries. in In my public diplomacy class, I learned about how the U.S. conducts its public diplomacy and got to interact with people from interesting, diverse backgrounds, such as Voice of America, the Department of International Information Programs, and the Art in Embassies program. We also got the chance to visit various embassies to find out how they conduct their own public diplomacy in the United States, which was my favorite part of the course.

I even got a summer internship in the public diplomacy field, and spent the summer working in the Office of Public Affairs at the U.S. Embassy in El Salvador. That internship was lots of fun and hugely informative, and my Washington Semester experience really allowed me to hit the ground running when I got to El Salvador. The information I picked up in D.C. about embassies, the Foreign Service, and public diplomacy was invaluable and made my transition to working in El Salvador much smoother. While I was there, I even got to visit an MCC project site and sent pictures back to my old boss in D.C.

I sometimes get a little nostalgic for the time I spent in D.C., but I know I’ll be back there again in the future. After such an awesome semester there, I know I won’t be able to stay away for too long.