Dietrich's donation to be one of higher education's largest 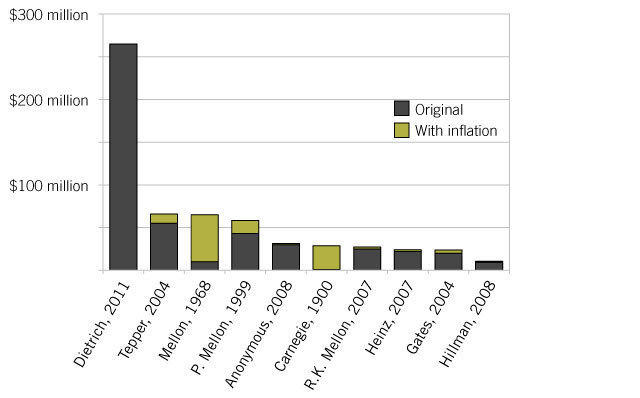 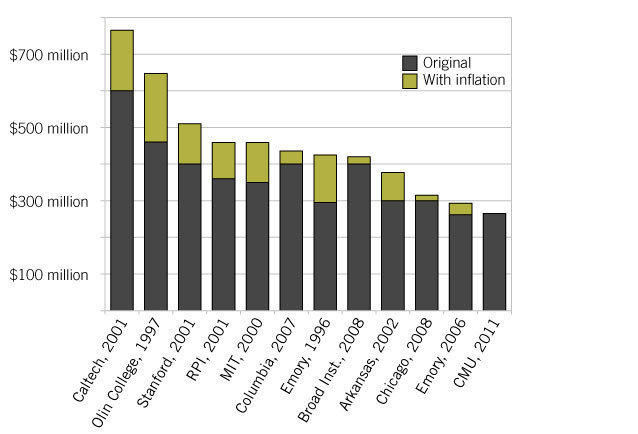 With his $265 million gift to Carnegie Mellon, trustee William Dietrich has provided not only the largest donation in the university’s history, but also one of the largest private donations to higher education anywhere.

Dietrich’s gift is nearly five times larger than the $55 million given by David and Marlene Tepper in 2004, which until last Wednesday had been the largest single gift to Carnegie Mellon in the university’s history.

“This gift is truly historic; that’s not just talk,” University President Jared Cohon said at Wednesday’s ceremony honoring Dietrich’s bequest. “Even taking into account the time value of money, this gift is larger than the one Andrew Carnegie made in establishing this university in 1900.”

In a letter dated Nov. 15, 1900, Carnegie announced his intention to provide an initial $1 million in bonds to create a technical school in Pittsburgh. Inflation data from Yale University economist Robert Shiller and the U.S. Bureau of Labor Statistics indicate that Carnegie’s grant would be worth approximately $28.9 million today. Carnegie made further donations to the school multiple times.

Also referencing the university’s other namesake, Cohon said that Dietrich’s donation “will have lasting effect in the way the Mellon family’s generosity has had on this university over many, many decades.” Among other gifts, members of the Mellon family founded the eponymous Mellon Institute in 1913, donated $10 million to establish what is now known as the Heinz College in 1968, and left the university a $43 million bequest in 1999.

Looking outside the university, information released by Carnegie Mellon and reported in the Pittsburgh Post-Gazette estimated that Dietrich’s bequest was the 14th largest gift by an individual to higher education worldwide and among the top 10 in the United States. Taking personal and family foundations into account, The Chronicle of Higher Education placed Dietrich’s donation as 11th in the United States among single-university grants and 14th worldwide.

Nationally, the biggest private donation to a single university went to the California Institute of Technology in 2001. Intel co-founder Gordon Moore and his wife Betty gifted $600 million in cash and stock to Caltech to be paid out over a 10-year period, The Chronicle reported.

In 1997, the Franklin W. Olin College of Engineering was established in Needham, Mass., with a $460 million grant in cash from the F.W. Olin Foundation. Adjusted for inflation, these two gifts would be worth $765 million and $648 million, respectively, in 2011 dollars.

Nine other U.S. universities have been the beneficiaries of private donations of more than $250 million in the last 10 years, according to The Chronicle.