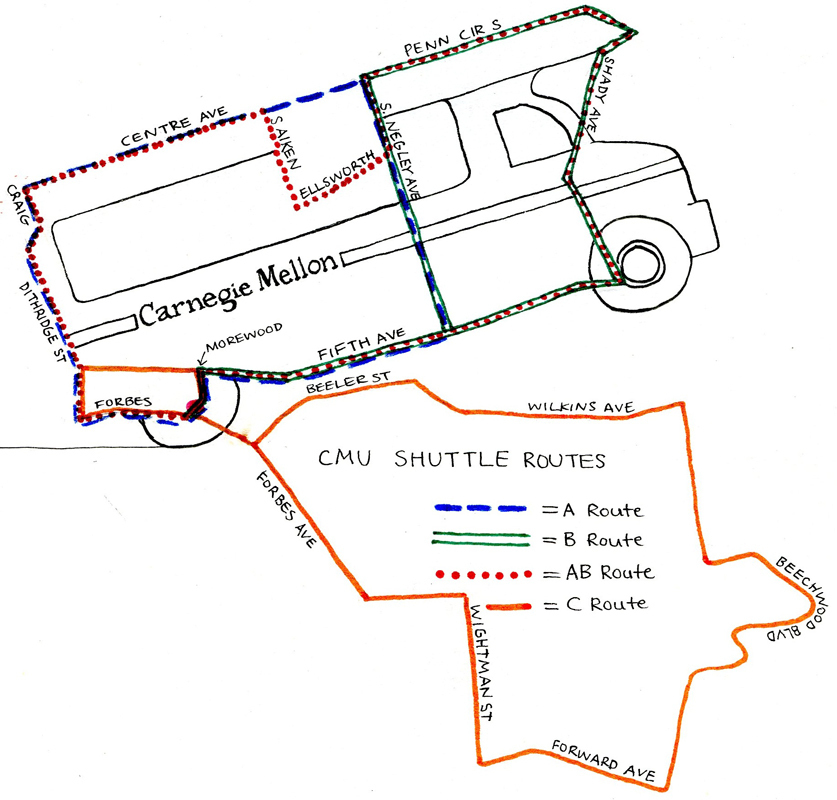 Carnegie Mellon shuttle service operations have been altered for the 2011–12 school year. Additional routes have been added, and several new services have been introduced.

“We had a couple of things we tried to accomplish when we did this,” Lieutenant Joseph Myers of the Carnegie Mellon police said, “and one of the things was to take a load off of the escort system, which was bursting at the seams.”

The escort system takes students who live outside the range of the fixed-route shuttle system to the intersection nearest to their home. According to Myers, ridership of the escort system rose 26 percent last year, and the same percentage the year before.

Last March, the Port Authority announced the elimination of 29 routes and the restriction of 37 others, amounting to a 15 percent reduction of service. Several of the affected routes served the Carnegie Mellon area. Meanwhile, Myers said, students are moving further away from campus. As a result, the escort service has become overburdened.

According to Myers, the Carnegie Mellon police consulted with shuttle drivers and student groups to determine the best way to fix the system.

“We looked at adding one more escort [bus], but we were restricted due to our resources and money situation,” Myers said. Instead, the police worked with drivers and students to determine what the best changes were to make to the shuttle routes.

The largest change to the shuttle service is the addition of a Squirrel Hill route, which runs from 7:30 p.m. to 3:30 a.m., five days a week. The Bakery Square, Oakland, and Shadyside routes have also been expanded. The new routes stretch as far as Beechwood Boulevard in Squirrel Hill and Shady Avenue in Shadyside. The combined Oakland/Shadyside route, which runs on weekends and from 11:15 a.m. to 11 p.m. on weekdays, now runs on a 45 minute loop, as does the Squirrel Hill shuttle. The individual Oakland and Shadyside routes, which run from 6:45 a.m. to 10:45 a.m., and then again from 4:30 p.m. to 6 p.m. on weekdays, continue to run on 30 minute loops.

Carnegie Mellon police have also added several new services to make it easier for students to use the shuttle service. The shuttle and escort service website has been revamped, with maps of the new routes and pages listing the stops on each one. A Twitter account called @AndysBuses now reports up-to-the-minute updates of traffic jams, bus breakdowns, and service changes.

The shuttle service has also collaborated with the creators of Locaccino, a GPS-tracking application, to let students locate shuttles using the application.

“Over the past year, a number of people have been asking if Locaccino could also be used to help them track the [Carnegie Mellon] shuttles,” Norman Sadeh, computer science professor and leader of the Locaccino development team, said in an e-mail. “As it turned out, our timing was perfect as they were just looking for a solution to do this. So over the summer, we went ahead and instrumented to have them report their locations to our servers.”

Students can access Locaccino from either a computer or smartphone, and see exactly where a shuttle is at the moment.

Despite the changes, some students do not feel that the shuttle service meets their needs.

H&SS junior Paul Carboni, who lives in Bloomfield, plans to walk to and from campus. “The nearest shuttle stops to me are halfway to campus,” Carboni said. “By that point, it’s easier to just walk the whole way than wait for the shuttle.” The escort service, which could theoretically take a student to Bloomfield, only runs in one direction; students cannot ride an escort bus to campus.

But Myers said that the shuttle service is much improved.

“We’ve had a lot of input from a lot of people,” Myers said, “and hopefully we’ve put together a reliable and effective transportation service, and kids will take advantage of it.”