The Cutoff Man: A sad direction for Major League Baseball 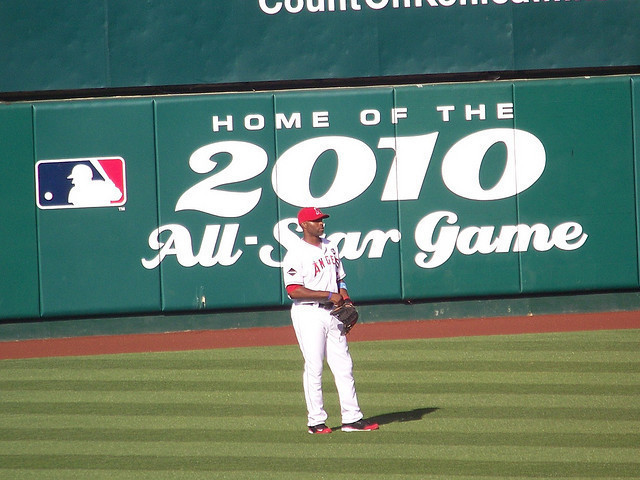 Would Major League Baseball one day let fans win a spot in the All-Star Game? (credit: Courtesy of Evan Wohrman on Flickr )

Ladies and gentlemen, welcome to Tammi Wilson Stadium for the Opening Day 2020 matchup between the Pittsburgh Pirates and your Milwaukee Brewers! Here now to throw the first pitch is Tammi Wilson herself, winner of MLB.com’s Twitter sweepstakes to rename the ballpark and start as pitcher for the team of her choice! Let’s hear a big round of applause for Tammi and her winning tweet: “I luv da #Brewers nd I wud luv to kiss Ryan Braun hes such a qtie! #MLBSWEEPS2020”

Perhaps things won’t be this drastic, and perhaps it’ll be closer to 2025 than 2020. But regardless, Major League Baseball has amped up its marketing throughout the past decade, especially in the past five or so years, and the results have not always been positive. Sure, there’s been a positive overall response; but loyal baseball fans loved the game long before MLB.com existed, and “giving the fans what they want” has quickly become “giving the fans what they didn’t know they wanted until it was advertised as a real option.”

It’s not just the folks in the MLB marketing department who are doing this. Recently, reporters and announcers have started to view things from the perspective of a fan, rather than a neutral party paid to portray the game in the most informative way possible.

For example, Saturday’s White Sox-Tigers game saw a tough play end Brad Penny’s no-hit bid. Chicago’s Brent Morel hit a sharp grounder down the line that Detroit third baseman Brandon Inge made a terrific effort getting to and fielding cleanly, but his long throw pulled first baseman Miguel Cabrera off the bag and Morel was safe. The Tigers’ radio announcers immediately opined that the ball was a hit — and it certainly was, given that a less-gifted third baseman wouldn’t have reached the ball to begin with.

However, rather than confirm what would end up being the right call, Thom Brennaman and Mark Grace — announcers for FOX’s broadcast of the game — spent time offering reasons for the play to be ruled an error in order to preserve the no-hitter.

“And they ruled it a hit,” Brennaman said, sounding incredulous, upon seeing the ruling.

“Much to the chagrin of Tiger fans,” Grace agreed. “They wanted to see some history!”

Well, of course they did, but that doesn’t mean it was the wrong call. That’s why the official scorer is one of my favorite people in the ballpark. He’s the most neutral guy there can be, going strictly by the book and not by favoritism of any kind, no matter how cool a no-hitter would be.

Maybe in 2020, Tammi wouldn’t get to choose the ballpark to rename and the team to start for — she’d just get to do it for the All-Star Game. That seems a bit more, um, realistic. In fact, All-Star balloting began on April 19 last year, so perhaps it hasn’t started yet this year because MLB.com has a big surprise up its virtual sleeve that’ll blow fans’ minds. Something crazy and super-awesome that will not only wow current fans, but bring in those new fans in droves.

Sure, baseball garners new fans every day, but I doubt those fans notice baseball because they can vote 25 times for the All-Star teams or because there’s a chance to throw out a first pitch at a ballgame. Maybe if that one person who wins that sweepstakes wasn’t a fan already, he or she would take a closer look at the game, but would those who didn’t win care at all? Probably not.

The integration of blogging and commenting into MLB.com has done some good to promote fans’ involvement and opinions. But while 5 to 10 percent of these comments and blogs are well-informed and well-thought-out, the other 90 to 95 percent just provide an outlet for bandwagoners and other such “fans” to let their uninformed thoughts fly into the public eye like YouTube comments.

Bad for baseball? Yes. Fans are a very important part of the game, but almost all fans have a team that they root for, and more than promotions or the public acknowledgment of their opinions, the thing that keeps them coming back is good, winning baseball. Hopefully, for the good of the game, Major League Baseball will not expand replay further than its current use for home run calls.

That said, if it does, one of commissioner Bud Selig’s reasons had better not be, “We want to make sure we are providing the best baseball experience for the fans.”