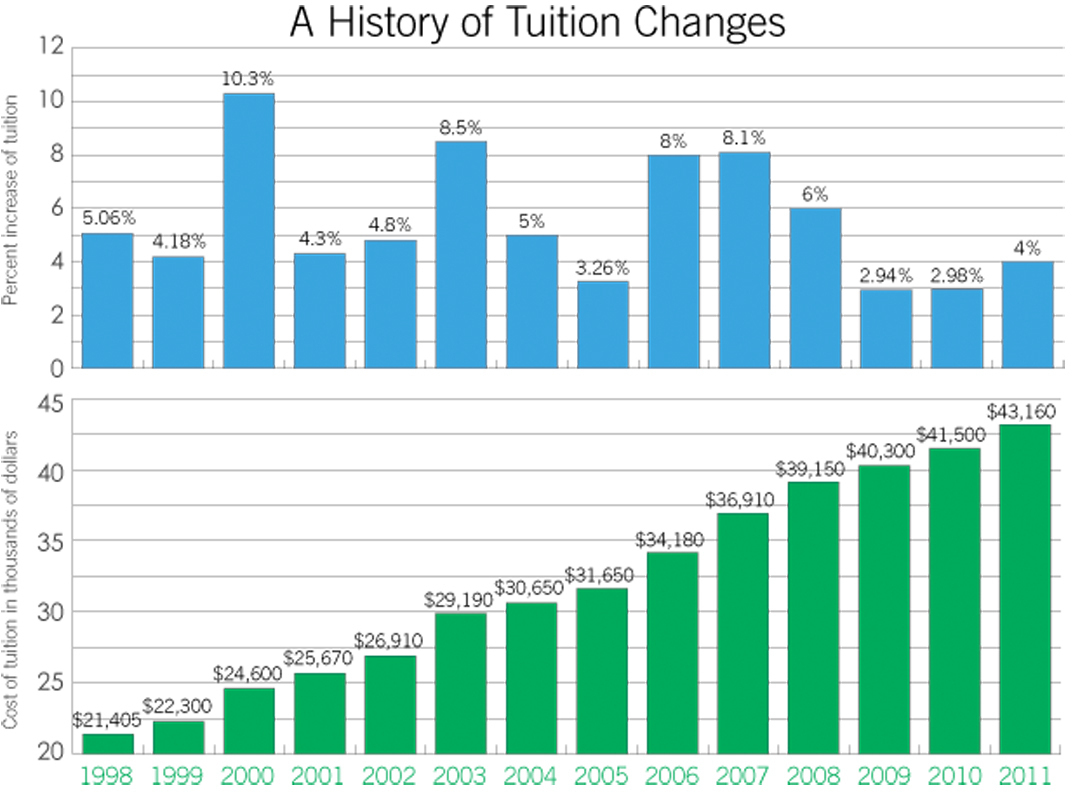 According to Kim Abel, the director of Housing and Dining Services, room and board costs depend on a number of factors, including necessary repairs, general program costs, and the state of the market. “We make every effort to control costs,” Abel said via e-mail. “We also review economic issues. For instance, gas cost can impact services delivered to the department such as freight charges.”

Tuition increases, however, are affected by other factors. Michael Murphy, the vice president for campus affairs, said that the amount that tuition is raised in a given year is determined largely by inflation.

According to the Bureau of Labor Statistics, the overall rate of inflation in the United States was 2.1 percent in 2010. Tuition increases are proposed by members of the administration and approved by the board of trustees. Murphy is one of the decision-makers behind tuition increases, along with Carnegie Mellon’s chief financial officer, Deborah Moon, and provost, Mark Kamlet.

Other factors, in addition to inflation, are considered as well. “Probably the two biggest issues [in determining tuition] were financial aid and the impact that the current economy was having on students and families, and also on the university in terms of the endowment,” Murphy said.

The other 70 percent of tuition revenue generally pays for operational costs in instruction, student services, and academic support — for example, professors’ salaries.

In addition to tuition, Carnegie Mellon has two other major sources of income: research grants, of which a portion is used to support utilities that make research possible, but the majority of which pays for the research itself; and the endowment.

Carnegie Mellon’s endowment is built out of large private donations. The university then invests the donations, and withdraws 5 percent of the market value annually, on a three-year running average. That is, Carnegie Mellon withdraws enough each year so that, given any three consecutive years, the average draw for those years is 5 percent. Thus, when the economy hits a low point, there is less money for the university to draw. Moreover, even if the economy recovers, the endowment draw will still be affected for several years, due to the three-year average.

Between 2008 and 2009, according to the factbook, the market value of Carnegie Mellon’s endowment dropped by $300 million, from just over $1 billion to about $750 million. Though it regained about $60 million in 2010, the annual endowment draw is still lower than normal, and will continue to be low for several years. This puts pressure on tuition funds.

Despite low endowment draw, the tuition increase for the 2009–10 school year was 2.9 percent for incoming students, the lowest since 1975. For the current school year, the increase was a similarly low 3 percent for new students.

In contrast, the average tuition increase for the past decade was 5.4 percent. The 2009–10 school year saw across-the-board pay freezes for faculty and staff, and last year, a modified pay freeze took effect.

“I think [the low tuition increases were] purely recognition that these are hard economic times,” said Murphy.

Recently, however, the administration decided that it was time to take a different strategy for the upcoming 2011–12 school year. Murphy said that the larger tuition increase was made in order to maintain the quality of Carnegie Mellon’s education and in order to bolster financial aid. Carnegie Mellon has traditionally held an annual fall meeting with a selection of local students and families in order to discuss tuition, and Murphy said that the decision to raise tuition was met with general agreement.

“I think it was a good decision,” Murphy said. “I think it was a positive decision for students.” He stressed, however, that the current environment is still one of financial constraint.
“I can’t find too much fault with the logic of raising the tuition,” said sophomore creative writing major Jack Homer, who was not involved in this year’s tuition meeting. “But I do wish that it didn’t have to happen, because it’s obviously going to be putting a strain on everybody involved.”

In contrast, according to The Wall Street Journal, the University of the South cut tuition by 10 percent for the coming school year. It is the only major university to have done so in recent years.

Carnegie Mellon does not consider the actions of other universities when making decisions about tuition increases, Murphy said. He said that the strategy for tuition adjustments is to place the majority of the burden on incoming students.

“We try to keep increases for continuing students as manageable as possible and put our risk in the marketplace,” Murphy said. “[New] students can make their decision with their eyes open.”

According to Murphy, the risk is paying off; Carnegie Mellon is still a popular candidate among prospective college students. The university’s undergraduate applicant pool grew by 9.5 percent between 2009 and 2010.

In other words, as long as people still want to come to Carnegie Mellon, students can expect tuition to keep rising.