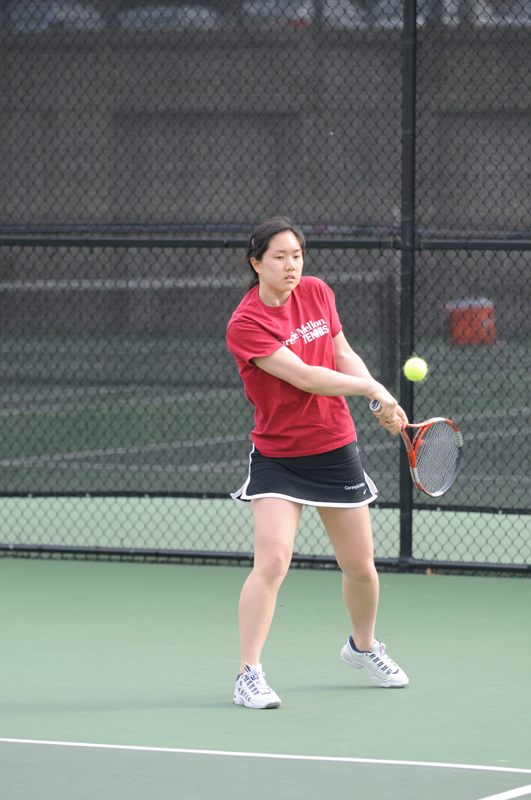 Junior Laura Chen hits a backhand during her doubles match against the University of Pittsburgh. (credit: Alex Webster/ Photostaff)

The term “Subway Series” doesn’t quite fit, but perhaps “street match” would suffice to describe the action between the women’s tennis teams of Carnegie Mellon and the University of Pittsburgh last Wednesday. The Tartans hosted the Division I Panthers from down the street and fell 6–3 to move to 10–6 on the year.

The Tartans entered the match with an excellent 30–12 doubles record during the outdoor season, but were unable to muster a win in doubles play against Pitt. The closest match came at third doubles, where senior Ashley Herrick and junior Cze-Ja Tam fought to a 6–8 loss to the hands of Panthers Minh Evans and Taylor Washington.

At singles play, junior Laura Chen deftly won her match at first singles, 6–1, 6–0. Tam earned another point for the Tartans by sweeping Pittsburgh’s Karma Parbhu 6–0, 6–0 at fourth singles. Senior Jennifer Chui got the Tartans’ third and final point after winning a marathon third set and match at fifth singles, 1–6, 6–3, 12–10.

Carnegie Mellon’s women will host Grove City College today, April 11, at 4 p.m. It will be their final regular season match before the University Athletic Association (UAA) conference championships later this month and the NCAA tournament in May.