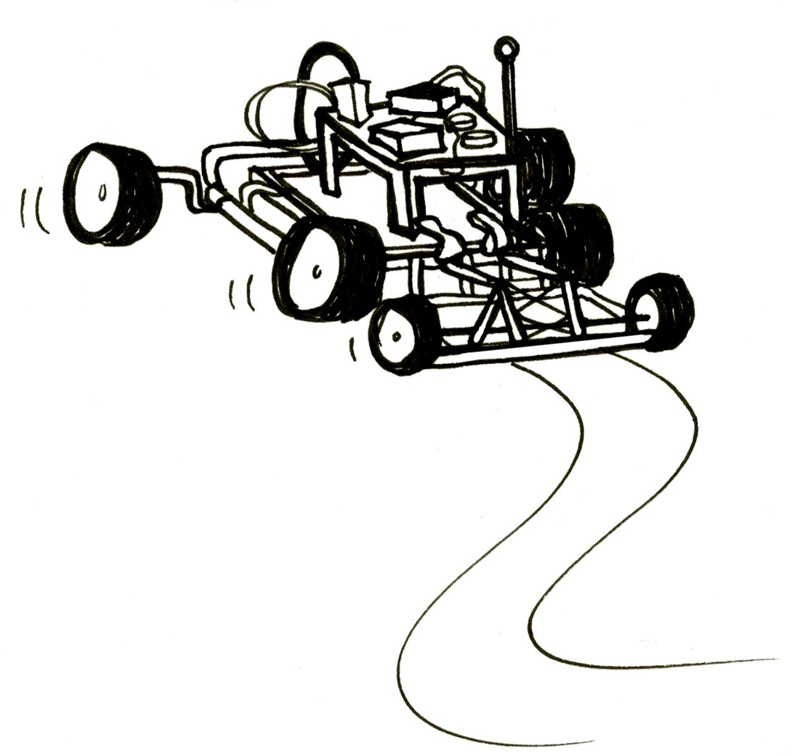 The sounds of carpentry filling the air and late-night buggy practices blocking the streets behind Hunt can only mean one thing: Carnival is just around the corner. While most people are busy preparing their booths or practicing pushing, there is also a small subset of people preparing for another event unique to Carnival, the 17th Annual Mobot Races. Challengers can enter their autonomous vehicles (“MObile roBOTs”) to race on a painted 400-foot course outside of Wean Hall, with prizes up to $1000 for the fastest mobot. Junior electrical and computer engineering major Kwabena Agyeman explained how mobots work. “It’s really just a mathematical [process]; running the robot along the course is just watching control theory in action,” he said.

The Mobot course consists of a painted white line two inches wide, and several “gates” or markers, which the mobot must pass through en route to the finish line. The course itself starts off with only a few curves and turns, but the end consists of several sharp curves and “decision points,” where the mobot must decide which version of the path to continue along.

There is also a four-minute time limit for each race. Each mobot will be allowed to race twice. Although human control is not allowed once the races begin, the official website states, “Animals (except primates) may be used to assist with vehicle control as long as such use is humane (does not harm the animal in any way) and conforms with applicable University regulations.”

A basic mobot requires several components to work: wheels, a sensing mechanism for the course line, a controller board, motors, and a power source which may vary from AAA batteries to a rechargeable lithium battery. The mobot is controlled by various algorithms that control the motors and sensing mechanisms. The wheels must be durable enough to traverse over different sidewalk textures, crevices, dirt, and travel up and downhill. Agyeman’s mobot has a central rear wheel called an omni wheel, which can move smoothly in all directions, not just forward or backward.

As for the autonomous portion of the mobot, every line of code is typed by hand. “How do I communicate to this motor? How do I communicate to this sensor? You have to figure that out yourself at the lowest level,” Agyeman explained. He uses a proportional integral derivative (PID) algorithm to help control for possible errors that his mobot may make. The sensing mechanism he uses returns eight data points, with different values to account for different colors of the sidewalk — the white race course stripe will return a lower value than the gray portions of the track. The controlling board will then adjust the path of the mobot accordingly to keep the white values “centered” on the race line. The PID will calculate the errors and integrate other values to keep the mobot on track.

Another issue mobot builders must keep in mind is controlling for the hill portions of the race — how does one keep the mobot speed constant? Too fast will give the mobot less time to calculate how to steer the wheels in the next few seconds, but too slow will hamper overall time.

Agyeman has devoted 100–200 hours over the past two years to building his mobot, named “Stingray,” which can drive six feet per second at full power. While intellectually satisfying, the costs of parts for a mobot can run up to almost $1000, depending on the quality. For students who join the Robotics Club, many of the parts are subsidized.

For Agyeman however, participating in the Mobot Races is only part of the fulfillment he gets from such an experience. “The whole point of [mobot building] is to see something move through your own effort. If you don’t take the time to do all of this yourself, then you’ve missed the learning opportunity. This is a good way of applying what you have learned.”

He added, “I wanted to do something with robotics, so I started working on mobots. My goal in college is to learn as much as possible in college as fast as I can, because once you enter the real world you rely on just what you know and get stuck in your ways. I’ve learned a lot from this.”

The Mobot Races will start at noon this Friday.