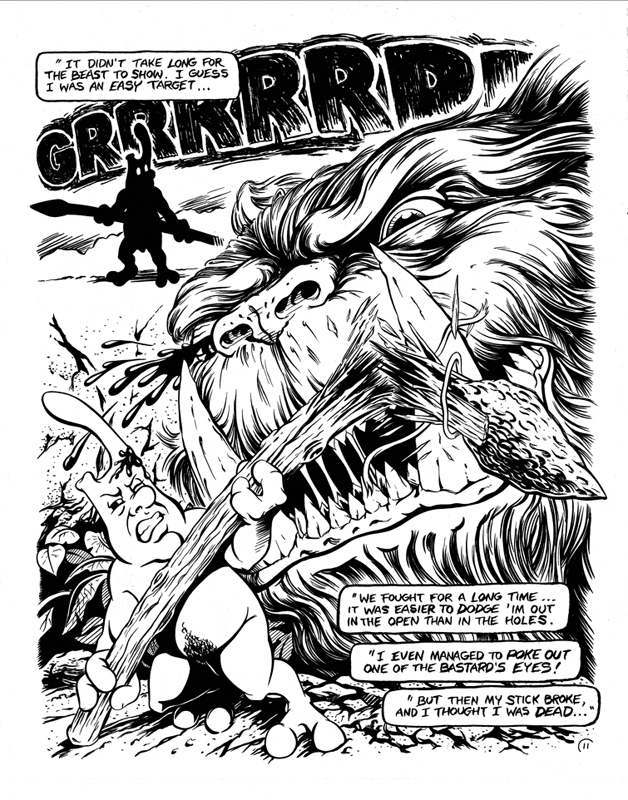 This illustration from _Grey Legacy_ was penciled by Wheaton and inked by Wise. (credit: Courtesy of Wayne Wise and Fred Wheaton)

One such lover of comics is Pittsburgh’s own Wayne Wise. Wise is an active member of the Pittsburgh independent comics community. A self-described grizzled veteran of the comics convention circuit and author of the comic Grey Legacy, Wise currently teaches a course at Chatham University on comics history, illustrates strips for Chatham Communiqué, and works at Phantom of the Attic Comics. Simply put, Wise has his feet deep into the world of comics.

Wayne grew up 50 miles away from Pittsburgh, reading comics off of spinner racks. It wasn’t until 1981 that the world of comics really presented itself to Wise. He recalled, “My first comic book convention was PittCon ‘81, held at Duquesne University. It was a big deal. It was maybe the second time I had ever driven in Pittsburgh — growing up out in the country, the consensus was that Pittsburgh was as far away as, and probably larger than, Tokyo.” After that trip, he and his friends began to make regular trips to Pittsburgh, their cultural mecca.

Throughout the ‘80s, Wise wrote and drew minicomics with his soon-to-be best friend and Grey Legacy collaborator Fred Wheaton. It was then that they started developing the Grey Legacy universe.

Grey Legacy is a science fiction webcomic that originally made its way into the world as a print publication. It was published in mini comics, anthologies, and as its own book in 1992 thanks to a Xeric Grant, a grant dedicated to helping comic creators self-publish their work. Notably, Grey Legacy was among the first four comics to win the Xeric Grant. Wayne and Wheaton’s visual style in Grey Legacy is like a well mixed cocktail of Dave Sim’s Cerebus and Jaime and Gilbert Hernandez’s Love and Rockets. The ink work uses hard black lines that usher in detail through the negative space on the rest of the page.

The comics environment from which Grey Legacy originated plays an important backdrop to the development of the series and the story’s universe. From the beginning, Wise and Wheaton had been working together on their own self published mini comics. When asked to describe the environment into which these mini comics were born, Wise opened up completely.

“There was a huge underground of self-published mini comics that was, by today’s Internet standards, hard to learn about or track down. It was a bonafide underground. We started doing comic strips for a music/humor [magazine] called The Plain Brown Wrapper. This was sold in local music stores and comic shops, but mostly through mail order. Through this, Fred and I learned of the existence of Factsheet Five, a review magazine for ‘zines and minicomics. Anyone could send their book in and get a listing and a review, and hopefully, as a result, some mail order business.”

Factsheet Five was one of the essential tools of the trade. Wise and Wheaton sent copies of the original Grey Legacy, as well as some of their other mini comics like Buggly the Inbred Bear, Dumpy Geeks at the Mall, and Boo Boo Chute; they sold a few copies and traded many more. Wise said, “In retrospect, more important than the sales, we found a supportive underground network of other people who were self-publishing.” It was at this point in time that the two decided to get more exposure.

In their search for exposure, Wise and Wheaton experienced the 1986 black and white comics explosion. This explosion in the black and white comics market was partially due to the rise of Kevin Eastman and Peter Laird’s independently created Teenage Mutant Ninja Turtles series. When asked about the explosion, Wise recalled, “At that time, anyone in America that could hold a pencil was publishing, and we were one of them.”

“The explosion of 1986 became the implosion of 1987, because the material printed was simply not selling,” Wise stated. It was in this shifting climate that Wise and Wheaton began exploring the world of extensive publication. In this exploration, Wise and Wheaton finally carved out with brush and ink the framework of the Grey Legacy universe for all to see. Wise recalled with sadness that “unfortunately, in the crash that happened amongst printing houses in ’87, the publication that was going to print a story revolving around a character named Shadowlock never saw the light of day. Despite the heartbreak of not seeing our comic make it to print, Fred and I were glad that not many folks saw that story; Grey Legacy simply wasn’t ready yet.”

In the limbo that ensued after the lack of publication, Wise and Wheaton convened and thought seriously about their story. The two realized that the story that they wanted to tell did not start with Shadowlock, the young man; it began 40 years earlier with Greylock, Shadowlock’s father. Wise and Wheaton had already been telling stories in their universe for a while, but it was in 1987 that they finally had a long arching story that they wanted to tell. Wise recalls that “soon after [beginning work on the Greylock story], we were contacted by the small anthology book, Wavemakers, with an invitation to write a story for one of their issues.” Wise and Wheaton put together a nine-page story revolving around a female character named Brix. In the grand scheme of things, she would be Shadowlock’s mother.

It was shortly after the publication of the short Brix story that Wise and Wheaton learned of the Xeric Grant. “Within a day, we had a letter in the mail with an application. Lo and behold, we got the grant.” Thanks to this grant, they published a huge run of magazine-style issues of the first Grey Legacy. It entered the world to good reviews and the future seemed bright for Grey Legacy, but unfortunately, as occurs often in the world of indie comics to even the most ambitious creators, life got in the way of the stories.

Wise and Wheaton have worked on Grey Legacy and other comics projects off and on over the past 10 years, but the epic Wise and Wheaton stories have been on hiatus. Hopefully, the two can find a way to get some more Grey Legacy publications into the world.