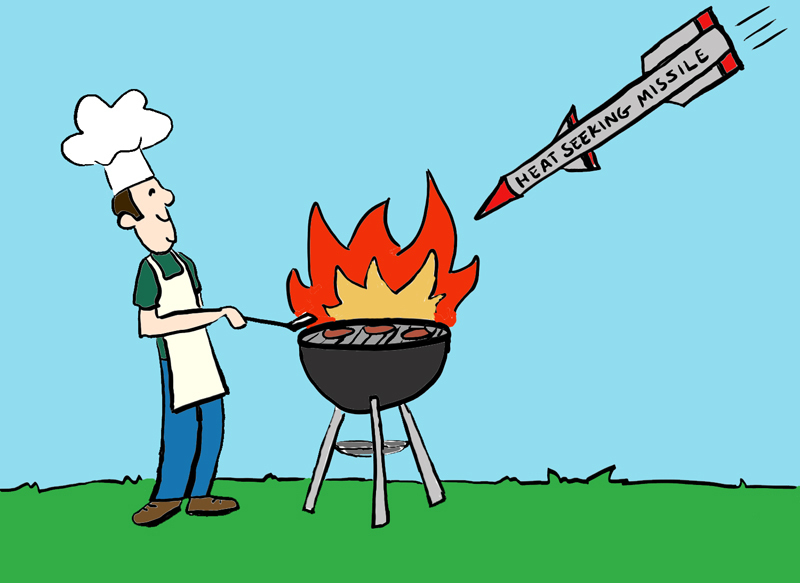 Missiles, a common military technology thought reliable and practical today, were not always the ubiquitous technologies they have become. Their proliferation in wars has been due to the convenience they offer armies by being “fire-and-forget,” thanks to the homing systems that make them accurate and eliminate the need for them to be continuously guided.

While some missiles use an active homing system utilizing radars and continuous calculations to ensure the missile stays on track, others use a more passive form of homing. These second types of missiles are referred to as “heat-seekers,” as they look for areas with strong infrared radiation to focus on as targets. While the technology might sound simple, it is surprisingly complex.

As any physics student will know, infrared radiation (IR) is a type of electromagnetic radiation occupying a section of the electromagnetic spectrum with larger wavelengths than visible light. Adding heat to bodies tends to increase the amount of IR they send out, as the extra energy of the body is turned into IR rays. As a result, warmer bodies emit more IR. Heat seekers track this output of IR and follow it to its source.

Heat-seeking missiles cannot simply turn to the largest IR source in their vicinity and destroy it. The sun is a huge producer of IR, and the fighter jets that release heat seekers also tend to be quite hot, which means they, too, give out IR.

To counteract the confusion these different sources can produce, heat seekers come equipped with navigation systems in their nose that contain an optical filter. This optical filter is calibrated to allow it to separate the unwanted data it receives from the useful information that will guide it to its target.

The optical filters usually come in two varieties that operate in different ways: An absorption filter removes huge chunks of unwanted radiation, like IR coming from the sun, and an interference filter removes smaller, more specific parts of the incoming IR radiation. These technologies combine to produce an inner navigation system that can reliably focus on the intended target and prevent the missile from flying off into the nearest source of heat.

Apart from the optical filters that these missiles use to eliminate noise from the signals they receive, they also have a sensor head, made of a special combination of metals, and an aerodynamic shape. A particularly popular model made in the 1950s and still in use in a modified form today is called the Sidewinder. When this model was first made, it only used IR to seek out its targets, which made it susceptible to jamming.

According to Wired.com, a method of jamming such missiles is to release decoy flares that have the heat signature of a jet engine to confuse the missile’s guidance system. IR ray fields and lasers can also confuse the optical sensors of such missiles.

Hence, heat-seekers have now been modified to become much more versatile. According to Air Power Australia, newer models have lasers that emit a spoke-like pattern; the missile only triggers when the spoke pattern is disturbed or broken by an object fitting a pattern. This ensures that the missile only detonates when it reaches its target. Also, newer models are “two-color” models which means they sense different ranges of IR to ensure that they reach a target and not a decoy.

Improved coolants have also been found to reduce the temperatures of the sensors on these missiles, as when the sensors are cool they tend to be able to sense a wider variety of IR radiation. New types of sensor cone shapes and fuses have ensured that the heat seeker stays current and useful.

When looked at as a piece of technology, there is no doubt that heat-seeking missiles are quite an innovation, and the improvements made to them since their invention have ensured that they are usable even in today’s advanced world.

While critics may not agree with the ways they are used, and their proponents might choose to focus upon the effects they can have during war through their destructiveness, neither side can deny that the missiles in and of themselves are technological marvels.