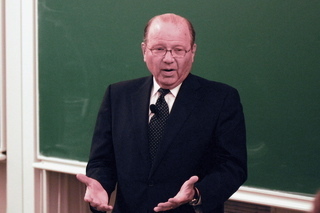 Carnegie Mellon President Jared Cohon gave an address on the state of the university last Friday. The event, which was organized by the Staff Council, was an open forum intended to respond to staff concerns. Prior to the address, staff members submitted questions and comments, and Cohon chose his talking points from the submissions. After Cohon’s address, the forum was opened to the audience.

Many of the questions Cohon received dealt with his salary. In November 2009, the Pittsburgh Post-Gazette reported that between the 2006–07 and 2007–08 school years, Cohon’s “total compensation” (salary and benefits) was raised from $591,876 to $733,220. According to the Post-Gazette, this figure is “above the median ... for the major private research universities.” The next year, Carnegie Mellon implemented a salary freeze for employees, Cohon included.

Cohon responded to this article, saying that his salary is $556,000 a year and has not increased since 2007. However, he did not reveal the total dollar amount of his benefits. “The university, in every respect, for every position, tries to compensate at levels comparable to the median percentile,” he said.

Carnegie Mellon compares the salaries of the president, vice presidents, and deans to those of 30 comparable universities; Cohon said that his salary is in the bottom 10th percentile of those universities. However, as a result of an agreement made in 2007, Cohon received a $91,000 bonus last summer. Cohon said that he gifted the bonus back to the university. Cohon was adamant that he would never take a bonus or raise during a salary freeze. He said there will be small salary raises in the next fiscal year.

In response to next year’s tuition increase, Cohon said that the financial aid office is in touch with students, attempting to detect financial stress and avoid students dropping out for financial reasons. He said that he believes the attempts have been successful so far, as the university’s student retention rate is at a historic high.

The university website reports that tuition will be raised 4 percent for new students and 3 percent for returning students in the fall 2011 semester.

Another concern that Cohon addressed was the state of university and regional transportation, particularly Port Authority (PAT) service cuts. According to the PAT website, 29 bus routes will be eliminated by the end of this month, and 37 more will see a significant reduction in weekday service.

“The university ... has been very active ... about service cuts, trying to protect as much of the service from PAT [as possible] and, in fact, improve it,” Cohon said. He highlighted the buses that run eastbound on Forbes Avenue between 3 p.m. and 7 p.m. as particularly problematic, and said that the university had received assurances “as recently as this week” that PAT services around campus will improve.

Cohon also addressed allegations of increasing bureaucracy within the university’s administration, saying that, as irritating as bureaucracy may be, “Every time we approve a new level of authorization, or a new form, or something like that, it’s for a good reason.”

For those interested, Cohon said that Carnegie Mellon’s Council on Administration, Regulation, and Finance is developing a website from which staff members and students will be able to find out the reasoning behind new bureaucratic requirements.

Cohon received several questions which dealt with the new 10-year master plan. The plan, which Cohon said will go to the city for approval within 30 days, outlines ideas for a new Tepper building constructed in part of the space now used for the Morewood parking lot, as well as development of newly acquired properties on Forbes Avenue.

“We don’t really have any plans per se,” said Cohon, “but we have a lot of wishes, hopes, and desires.” He said that the university definitely intends to build on the land. As for the new Tepper building, Cohon said that it is in the discussion stage.

Michael Murphy, the vice president for Campus Affairs, cautioned people to take the master plan with a grain of salt. “Every master plan has many more projects on it, many more buildings on blueprints, than will ever happen,” he said. The important thing, he added, is “to have the approval to move forward on eventual projects that may come to pass.”

Overall, said Cohon, “The university is doing very well. The key things that we do — that is teaching, and research, and public service — are all areas where the university is excelling.”